Fri, 05/07/2010 - 17:59 - cruzers
Printer-friendly version
Tweet
Thong Man is famous here in Busan.  He's been on local television shows and is a fixture at Haeundae Beach.  Google "Thong Man Busan" if you're bored.  Warning, you might burn your retinas.  In Busan, he's more recognizable than the Mayor, Bruce Lee or Robert Downey Jr., well, from the backside anyway.

Koreans are typically very conscious about staying out of the sun.  Pampering their skin and avoiding those UV rays are two of the reasons why they look so young.  Koreans aren't prone to flashing a lot of skin either, sun or no sun.  That's what makes Thong Man so special.  His savage tan makes George Hamilton look like Dracula.  And his "look at me" attitude is something to behold.  For example, to maximize the amount of people that lay eyes on his bronzed posterior, he'll hop on a waverunner and go zipping up and down the beachfront, standing up of course so the masses can gaze upon his cheeky glory.  Amazing.  Don't believe me?  Check it out: 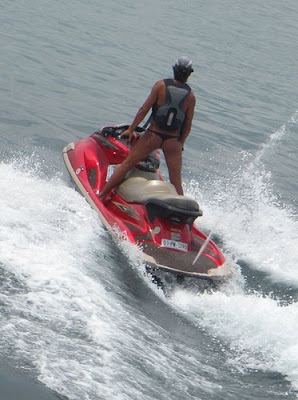 For the record, I didn't take this picture.  It's from one of the travel blogs that chronicle the adventures of Thong Man.

So there he is on Haeundae Beach, throwing the frisbee around with his other scantily clad buddies, or jumping rope right on the boardwalk, in a tight little banana hammock.  The jumping rope piece leaves little to the imagination.  Not that I was closely inspecting but I thought I saw two pigs wrestling inside that microscopic piece of clothing.  Oh yeah, and he does these things in the middle of winter.  It's quite the spectacle.

Needless to say, I will forever treasure these two pictures: 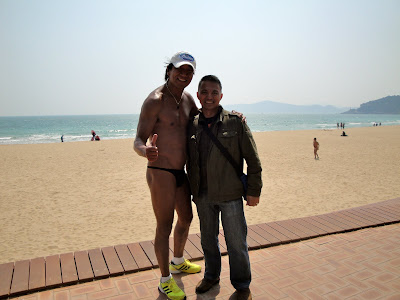 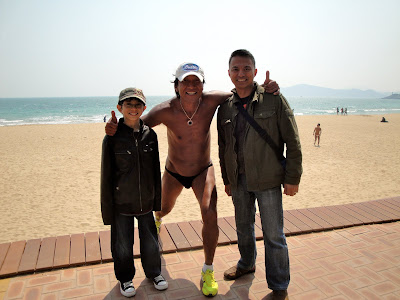 Carol was horrified when I pleaded with her to take these pictures.  We had an opportunity to snap a shot with Thong Man during a random walk on Haeundae Beach a couple of weeks ago but Carol just wasn't mentally prepared.  It took some intense training to break down Carol's walls and prepare her for such an important photo opportunity.  After a month of Matt Foley "down by the river" style motivational speeches from me and a large amount of Red Bull, Carol was now ready to snap some pictures, clenched butt cheeks and all - Thong Man's butt cheeks, not Carol's.

And so on a cold, jacket wearing day while on a quaint family stroll down the boardwalk, I see way off on the horizon, two canned hams.  No, it was actually the famous glutes of Thong Man instead.  He's casually flipping the frisbee to his half naked friends, jiggly parts flapping around with reckless abandon, indecent exposure charges a mere spandex tear away.  Of course, there are the locals, huddled up in their fleece, warm jackets and scarves, gawking as if they're watching a giraffe give birth next to a burning car full of circus clowns on the highway.

I broke out the camera with great urgency, like I was about to snap a shot of the thought to be extinct dodo bird.  I handed the camera over to Carol and hoped for the best.  In my best cool walk, I meandered over to Thong Man.  Not normally star-struck, I have to admit that I was a little nervous.  I felt like I was asking a girl out to the prom.  We started out with small talk.  Thong Man immediately disarmed the situation by flashing a big smile.  No problem with the picture.  He was so cool and cheerful.  I did my best not to gaze my eyes in a southerly direction.  I didn't want him to think I was a stalker or something.  Thanks a bunch Carol for snapping the pictures.  You get the special wonton tonight.

Seriously, I admire the heck out of Thong Man.  That's attitude right there.  Thong Man, if you ever run across this blog, know that I have much respect for you and your crew.  You should have t-shirts printed in your honor.  Maybe with a logo that shows off that attitude.  Something like "No Fear."  That's actually kinda catchy.  I gotta look into that.

Along with the great attitude and the ability to really enjoy life, one other thing that Thong Man reminds me of - and this is important now - is that all it takes is ONE.  One other friend.  You see, Thong Man isn't alone.  He's out there with one or two other thong-clad friends.  When you've got just one friend, it makes everything right.  You can do your thing with your friends, no matter what that thing is - Dungeons and Dragons, volunteering, traveling to Korea to teach, hanging out, or wearing thongs on the beach and playing frisbee.  Napoleon Dynamite is a pretty dorky dude.  But he had one friend, Pedro.  And with that one friend, everything was right in the world.  All it takes is ONE.

Thong Man, I salute you!