Mon, 07/07/2014 - 16:16 - anasays_what
Printer-friendly version
Tweet
For whatever reason I rarely feel motivated to write posts that are just about my life, but I just had such a ridiculously good weekend I feel compelled to write about it. These are the things you want to remember, right? Focus on the awesome stuff, ignore the bad stuff, instant success. Maybe.

Anyways! I've been a total homebody lately, more likely to lurk at home on the weekends reading YA fiction and drinking iced coffee than to go out and do, well, anything, but this weekend I finally broke my rut. Despite a late and lazy start, I caught a bus down to Daejeon to meet my friend Joon who was visiting from Seattle. The whole plan was really hard to explain to anyone. So wait...your friend from America...who is Korean...and she's in Seoul...but you're meeting in Daejeon...why...?

Why Daejeon? Lena Park! 박정현! I'd only vaguely known of her, mostly from her song on the Heirs OST, but when Joon asked if I wanted to go with her, I figured why not? It was my only chance to see a friend, and live music is pretty much always fun.

I am so, so, SO glad I made that choice. Not only is she a great singer, she has a remarkable stage presence and ability to connect with the crowd. Even though I could only understand about a third of her Korean, I felt a real connection with her and her music as she talked to the audience. 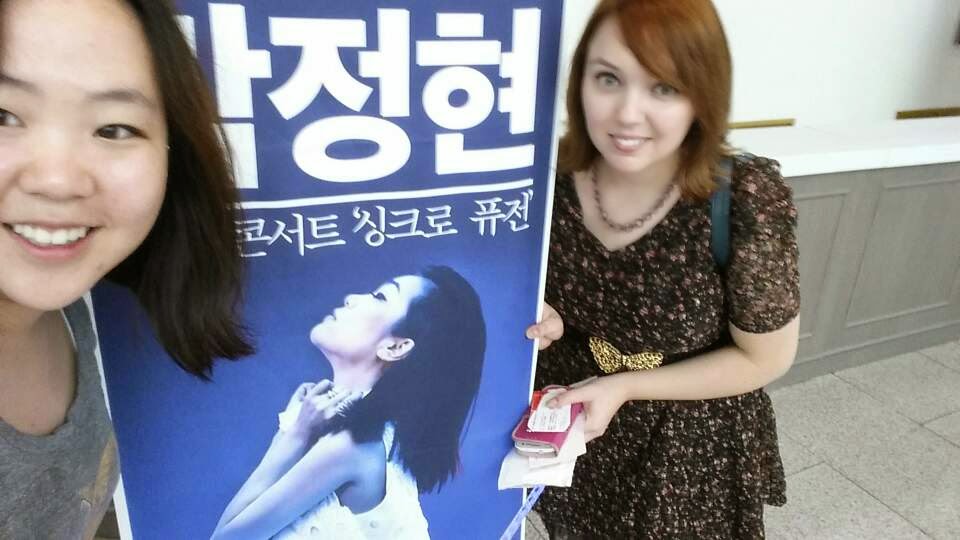 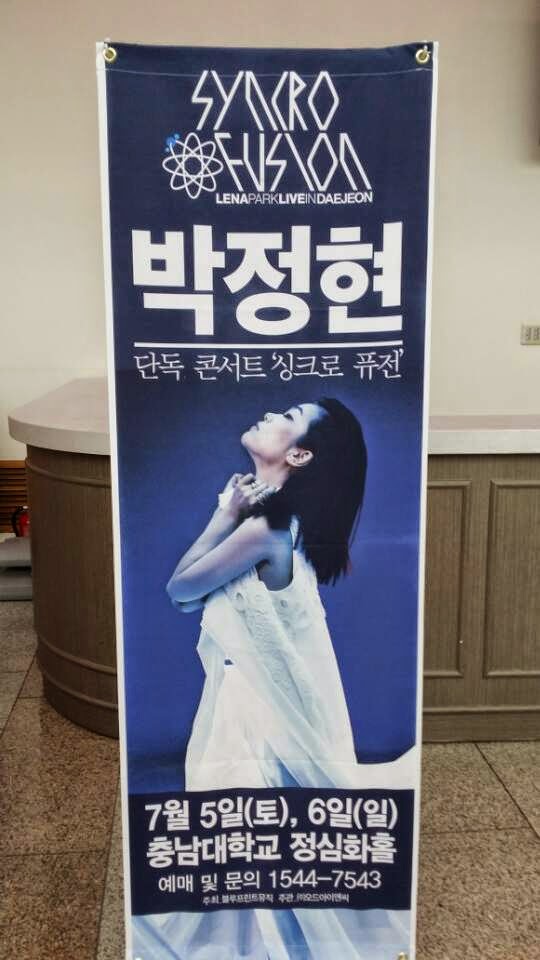 If you've never heard her music, go and change that right now. She's a very powerful vocalist and her songs are really beautiful. Lots of ballads, but I've given up denying my love of shmoopy music. All ballads, all the time, zero regrets.

The concert finished around 10, which is unfortunately also when the last bus from Daejeon to Wonju leaves, which is exactly why I'd decided to just tag along with Joon back up to Seoul, adding a weird extra leg to my journey.

Wonju, Daejeon, and Seoul are all almost exactly the same distance away from each other, too, which is kinda funny, and also meant that we rolled into the Gangnam bus station around 12:30, tired as anything. Now, here is something I love about Korea. A couple months ago I spent a night in a cheap little guesthouse near Myeongdong, so I figured I'd book a room in the same place this time. Well, not only did the manager remember me, he upgraded my room for no charge and let me check in at 1 in the morning. He wasn't even there when I checked in, but in the morning we ended up talking for almost half an hour, and now we're friends on kakaotalk. I guess I won't have to worry about finding a place to stay in Seoul any more!

I checked out around 11, but since I didn't have anywhere to be until 2, I figured I'd just grab some coffee and wander around Myeongdong until then. That worked for a little while, but what didn't occur to me is how ridiculously hot it would be. I guess I get spoiled out in the country, because while it's been hot in Wonju, there's something about the way a city gets hot and stifling that is on a whole other level.

Finally, after 45 minutes of sweating and baking and roasting and all manner of other cooking terms, I gave in to my weakness and chose a cafe entirely at random. Lucky for me, John & Jin's was a perfect choice. Quiet and cool, with a perfect people-watching view out the second story window. With sandwich and iced coffee in hand, I settled in for a couple hours of the Great Gatsby over an early lunch.

I don't really miss western food that much, but every once in a while I really want a nice sandwich, so when I saw a grilled chicken and cream cheese ciabatta sandwich on the menu, I figured I should go for it, and I was not disappointed. The flavors were subtle but delicious, and the bread was actually quite good. I pretty much grew up in a bakery, so I hold bread to a pretty high standard, and this managed to pass muster. Or should I say mustard? I'm sorry, that was terrible.

By the time I ate and read for a while, the weather cooled down a bit, at least to the point where being outside wouldn't be something like a slow death. While I'm not sure I would want to live in Seoul, I love visiting Myeongdong, losing myself in the crowds. People from all over the world, all ages, anything you can imagine, and so many languages! Korean of course, and Japanese, Chinese, English, French, Russian, and plenty of words I can't even guess at! The small town vibe is nice, but to disappear in that crush of humanity is a real treat once in a while.

Also, I got bubble tea.


What do you prefer? The familiarity of small town life, or the relative anonymity of the big city? I can never choose.