Typhoon Sanba is expected to make landfall in Korea Monday morning near Namhae.  It will likely hit as a category 1 storm and Jeju will be the first to feel its effects. The storm will take a more easterly path than last month's typhoon Bolaven with parts of the Southern  coast seeing rainfall of up to 40cm.  We will continue to update this page with storm tracks, satellite images, and news blurbs as the storm approaches and makes it way across Korea.  If you hear any breaking news or have updates to share, please comment below. 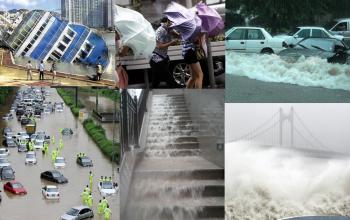 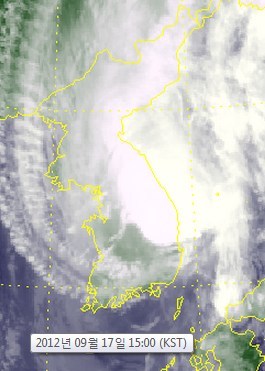 Packing strong winds of 38 meters per second and heavy rains, Typhoon Sanba was moving northward at a speed of 22 kilometers per hour as of 1 p.m. from near the southern city of Daegu, after battering the southwest coastal areas Monday morning, according to the Korean Meteorological Administration (KMA). It forecast the typhoon would veer out to the East Sea late in the day after passing through South Korea's mainland.

Most of the southern regions received more than 200 millimeters of rain during the day, with the southern coastal city of Namhae receiving 214 mm so far, according to weather officials, noting that some regions in southern and central South Korea will get up to 200 mm of additional precipitation by midnight.

Heavy rains and strong gusts accompanied by the powerful storms devastated the southern regions. In Gyeongju, a landslide caused a house to collapse, injuring two people, and some 30 residential buildings were flooded on the southern island of Jeju and the city of Yeosu, displacing 29 people, according to the National Emergency Management Agency (NEMA) said.

Across the country, a total of 1,187 people were forced to evacuate, and 49,741 households were left without electricity, the NEMA said.

The authorities canceled 213 domestic and 52 international flights in the country's major airports including Incheon, a gateway to Seoul, and suspended 168 ferry services across the country, the land ministry said.

Major dams such as Paldang, Chungju and Namgang throughout the country discharged water to control their water levels and national parks and other areas considered dangerous in such a storm were declared off-limits as a precautionary measure.

Busan, Daegu and Chinhae can expect 55- to 65-mph sustained winds and 75-mph gusts as Sanba rolls through between noon and 2 p.m. It should move rapidly northeast into the Sea of Japan (or East Sea) by evening.

The season's 16th typhoon is hurtling northward toward South Korea and is expected to make landfall in South Gyeongsang Province Monday afternoon after passing east of Jeju Island.

Sanba is then expected to pierce through the inlands and make headway towards the East Sea near Gangneung, Gangwon Province in the evening.

With Sanba approaching, typhoon warnings are in effect in Jeju Island and Jeolla and Gyeongsang provinces, and alerts are in place in the Chungcheong provinces.

Advisories will also be issued during the day in capital Seoul, Gyeonggi and Gangwon Province.

A hundred to 300 millimeters of rain is expected in eastern Gangwon Province. Eighty to 200 meters are forecast in the nation's south and 30 to 150 millimeters in the central region.

The winds are rising in Busan, South Korea, and heavy rain is lashing the Korean Peninsula and Southern Japan as Category 2Typhoon Sanba steams northwards at 22 mph. Sanba pounded Okinawa, Japan early Sunday morning local time as a Category 3 storm with 120 mph winds, but no casualties or heavy damage has been reported thus far. Radar out of Korea shows that heavy rains from Sanba cover most of the Korean Peninsula, and heavy rain is likely to be the main threat from Sanba in Korea. Sanba will continue to weaken as it encounters cooler waters and higher wind shear today, and is likely to be at Category 1 strength at landfall in South Korea near 22 UTC (7amKST) on Sunday/Monday.

Busan Metropolitan Office of Education has called school off for kindergarten, elementary, and middle school students in Busan. High school principals will be making the decisions about classes at their respective schools.  For all schools, teachers are still expected to report for duty.

From The Korea Herald
Thousands of ships took shelter in ports, ferry services were suspended and access to valleys and other risky areas was restricted on the southern island of Jeju as precautions Sunday as a powerful typhoon was approaching South Korea.

Packing strong winds of 48 meters per second, Typhoon Sanba was moving northward at a speed of 26 kilometers per hour from about 80 kilometers off the southern Japanese island of Okinawa as of Sunday morning, according to the Korean Meteorological Administration.

It is expected to pass South Korea’s southern resort island of Jeju Monday morning before pounding the peninsula in the evening, arriving more than 50 miles southeast of the capital before churning northwards, Seoul’s weather service said.

Authorities have issued severe wind and heavy rain alerts for most of southern coastal regions, warning of rainfall of up to 300 millimetres (11.8 inches) per hour in some regions.

About 4,800 ships in the southwestern port city of Yeosu have been taken out of the typhoon’s path, while officials in the city and nearby areas have been put on high alert.

School authorities in Jeju have ordered all schools in the island closed on Monday.

The government may issue the same order on Tuesday for southern regions of the peninsula, Yonhap news agency said, adding dozens of ferry routes to the island and along the southwestern coast have been suspended.

Weather officials warned that Sanba could be one of the strongest typhoons to ever hit South Korea, almost as devastating as Typhoon Maemi in 2003, which left 132 people dead and caused massive property damages.

Thousands of ships took shelter in ports, ferry services were suspended and access to valleys and other risky areas was restricted on the southern island of Jeju as precautions Sunday as a powerful typhoon was approaching South Korea.

Korea can expect Sanba to remain a powerful Category 1-equivalent storm, packing sustained 104-mph winds and 127-mph gusts as it slams ashore along the southern coast at mid-morning Monday. Chinhae Naval Base (30 miles west at 10 a.m.) and Pusan (57 miles west at 11 a.m.) should bear the brunt of the storm, though Daegu (20 miles west at 1 p.m.) should take some hard knocks as well as Sanba roars through the southern peninsula...

From the U.S. Embassy http://www.asktheconsul.org/

This message is being issued to alert U.S. citizens residing or traveling in the Republic of Korea that the Joint Typhoon Warning Center has issued warnings for a typhoon that at this time is currently located near the coast of Japan and is moving towards the Korean peninsula.

We will continue to monitor Typhoon Sanba’s track.  Please monitor the typhoon’s track by listening to the radio, and watching television.  For English-language information on the typhoon situation on the Korean peninsula, please refer to Armed Forces Network FM at 102.7, and/or TBS English FM 101.3.

Carry your travel documents at all times (i.e. U.S. Passport, Birth Certificate, picture ID’s, etc.) or secure them in safe, waterproof location.  You should also contact friends and family in the United States with updates about your whereabouts. Residents may wish to stock up on emergency supplies of food, water, and cash in case of storm-related power outages.  We also advise that you locate shelter, monitor media reports, and follow all official instructions.
Additional information on hurricanes and storm preparedness may be found on our “Hurricane/Typhoon Season” webpage, and on the “Natural Disasters” page of the Bureau of Consular Affairs website.  Updated information on travel in Korea may be obtained from the Department of State by calling 1-888-407-4747 within the United States and Canada, or from overseas, 1-202-501-4444.  These numbers are available from 8:00 am to 8:00 p.m., Eastern Time, Monday through Friday (except U.S. federal holidays).
Please continue to monitor the Embassy’s website for updated information at http://www.asktheconsul.org/   Please consult the Country Specific Information for Korea, available on the Bureau of Consular Affairs website.

We strongly encourage U.S. citizens to enroll with the nearest U.S. embassy or consulate through the Department of State's Smart Traveler Enrollment Program (STEP) website. By enrolling, you will receive the Embassy's most recent security and safety updates during your trip. Enrollment also ensures that you can be reached during an emergency. While we will do our utmost to assist you in a crisis, be aware that local authorities bear primary responsibility for the welfare of people living or traveling in their jurisdictions.

No unwarranted terrification intended, but according to this article on Yonhap

"Up to 400 millimeters of rain is expected before it moves out of South Korea, officials said."

The forecast above for Busan, Jeju, & Seoul make it seem more like 10cm in those places, but perhaps certains spots  (like Yeosu and Namhae) will get a lot more.

The Korean forecast says 100 to 300 mm of rain . Thats alot of rain in my book . Weather.com says tomorrow there will be winds of 60 mph to 80 . Tv said that elementary and middle schools will be closed . Seems this may be the real deal this time . It will be a typhoon when it arrives but maybe a cat 1 like reported . My advice  do not go outside . Seems simple when you go outside you may be hit my something .