All Recent Posts
Nuke test a fitting memorial?
The last time that BS Bank gave me trouble, they were still going by the far less apt Pusan Bank. An over the top hissy fit, which began and ended with me calling the bank racist, eventually resulted in me getting what I wanted. I swore that the next time PS Bank tried to screw me would be the last time. I didn't swear that I wouldn't have another hissy fit.

A couple of weeks ago, I made my monthly BS Bank visit to pay some bills and wire more than half of my salary home. Were the latter not a possibility, I wouldn't be here. While teaching English in Korea isn't going to bring in the riches, it pays off enough student debt that I can justify still being here when I'm knee deep in yet another I Hate Korea week.

I usually deal with the same teller at BS Bank, and he always asks for the same information: passport, bank book, and details of the account I'm wiring money to. Just in case he happens to fall into a barrel of BS that day, I always make sure to have further proof of my identity, statements from previous transactions, and every single pay stub that my current job has ever given me. He doesn't really need any of this stuff to wire my money home and had never asked before, but BS happens.

On this day, he looked over my account information on my screen and then suspiciously back at me. "You send money home every month." It wasn't clear whether he was stating a fact or inquiring, so I responded as if it were a question. "Yes. That's sort of the point." I've never been good with stupid questions. Or really obvious statements. Which one was it?

Overwhelmed by my charm, the teller tried to tell me that he was going to need to see pay stubs. I handed him the stack of them before he could come up with the words. He eyed them suspiciously, looked back at the screen, and glared at me. "Do you have anything else?", he asked. Deja vu! "Why would I need something else? Pay stub. Deposit. You might notice that the amounts match", I sneered. He wasn't satisfied. "You're going to need.... a certificate.... from work", he told me. Because apparently having official pay slips from the company which not only matches the one on your VISA, but also conveniently coincides with the only deposits ever made into your bank account, isn't quite proof enough that you're not trying to wire drug money out of the country.

"There wasn't a problem here in February, March, or April", I stated. Because I understand that statements are not questions. "Every month. You need... certificate. Yes". Was he asking me a question again? "Yeah... no. That's total BS", I told the teller. The teller looked confused. I wasn't done. "See, I'm just going to find a bank with less discriminatory policies. Close my account. Now." So, he did.

As it turns out, there was no hissy fit to be had this time. Largely because I was so sleepy, but I'd like to think that I've matured enough to realize that there is little use in wasting energy fighting battles that you can't win. Also, I've been sober for what seems like a ridiculously long time. Is it June yet? I said little more than what needed to be said and I was out of there. It was nap time.

My reward for refusing to tolerate BS was to drag my ass across the street with $2,500 in my purse. I don't love doing that nearly as much as I thought I would, so I dumped it all off at the Korea Exchange Bank. KEB opened my account and wired my money home in one sitting, all without asking a single stupid question.

Before anybody wonders why I'm toolishly abbreviating "Busan" and "Pusan" as BS and PS, know that it's not because I think I'm being clever, but that it's what the company would want: 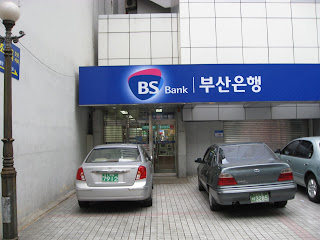 That the brain trust at Pusan Bank think that the logical step after changing from a P to a B is to introduce a BS logo, is terribly amusing. If I'm honest, I might be willing to admit that there is a perfectly reasonable explanation for how this logo came to be, and that I only assume that this is yet another glaring example of this institution's retardation because my past relations with the company have been sour and I hate them a whole bunch. And if I'm super lucky, somebody really boring will share this really boring explanation with us in the comments section of this post. But mostly, I'm just going to enjoy the chuckle that I get everytime that I walk by this sign.

You must know that since the beginning of the world a wise prince is a mighty rare bird, and an upright prince ever rarer. They are generally the biggest fools or the worst scoundrels on earth; therefore, one must constantly expect the worst from them and look for little good...Temporal Authority, Martin LutherI do not [...]
Visit msnbc.com for Breaking News, World News, and News about the Economy Tom Friedman has a touch of the ol' time liberal arrogance I always found tactless. Peter Daou is more bearable and makes sense to boot! Since this is an argument I've heard more than once, let me ask the following: don't we need extraordinary measures to [...]
Xian Qiang's nuanced perspective on Chinese Internet expression is very reassuring.Qiang says strong Internet voices are emerging in favor of democratic reforms in China. He notes that this strain of opinion can at time conflict with nationalistic voices in the country, such as those that emerged in response to last year's pro-Tibet rallies, which have [...]
Jason at kimchi-icecream posted this video and pics from the 2009 Chuncheon Mime Festival Opening Ceremony today. Well, at least it wasn't "Welcome to the Jungle"! Roboseyo had a chance to eavesdrop on some other spontaneous demonstrations of condolence...but the police just couldn't refrain from paranoia. I can debate whether [...]
Michael Schaffer assures non-Sri Lankans, that distraught over missing an opportunity to avert civil war between Tamils and Buddhist Sinhalese, future Buddhist nationalists in Colombo might allow Westerners another chance for hollow charity. In fact, Sri Lanka's civil carnage has been most tragic precisely because of what the island nation is not. Rather than the sort [...]
Ironically, one of the most topical - because of the A/H1N1 scare- obtuse - due to medical terminology - and hilarious presentations of this series all at once. Robert Siegelt's introduction made this more entertaining than it might ordinarily have been. Excuse me now, but I'm going to take inventory [...]
The Week We View: All the news that's fit to miss