We went to Seoul last weekend for a very special occasion! Our friends at Talk to me in Korean along with Eat your Kimchi of Youtube fame have officially opened up a cafe together! It’s called You Are Here Cafe, and I think it will be an additional “must-see” to so many visiting Seoul for the first time. We first heard about the cafe this past winter from Hyunwoo (of TTMIK) during the beginning stages of planning, and we’re so excited that the opening day has finally come and gone so successfully. 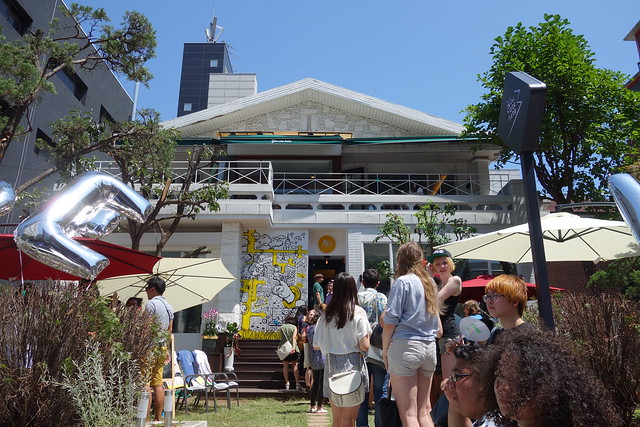 The You Are Here Cafe, street view, opening day!

We left Yangsan for Seoul very early in the morning on Saturday to try to make it to the opening at 10AM. At around 9:30 we got a message from Hyunwoo on Kakao Talk with a picture of a line outside of the door of the cafe! Awesome, but not too surprising. By the time we arrived at around 10:30, the line was so long that you could walk down the road for 2 minutes next to the line, backed all the way up to a local GS25. Once we said our initial hellos, we helped them serve water to people waiting in line. Everyone seemed so busy because while they were managing the crowd and making sure the opening was going smoothly, they were also being stopped every two seconds by people for selfies! Props to them for holding themselves together in the cafe for more than 12 hours, whew.

We came and went all day and night, only leaving to eat lunch. When we came back to the cafe hours later, some of the same people were STILL in line. We heard that people waited in line around 3 hours to get into the cafe. Talk about dedicated fans and supporters!

We got a quick tour of the cafe from Hyunwoo, and I have to say, it’s a fantastic space. It’s not in the super busy part of Hongdae so it’s quiet, but I suspect this area will become more popular with the addition of the You Are Here Cafe. It’s 2 stories and has a patio and nice yard out front. Menu items were hand picked by the TTMIK and EYK team, and the food items are based off of Martina’s personal recipes! We tried the carrot cake and a powerball, both really delicious! (Unfortunately no picture, too hungry >.<)

The highlight of the day for me was hanging out with my fellow k-vloggers, because it's always so much fun when we all get together. Abi from Smiling Seoul has left Korea so it was the last time we could hang out with her. But we also got to meet Simon and Martina for the first time as well as Nic and Hugh from My Korean Husband! We’ve talked on social media a bit but it was really great to meet both couples and chat for a bit about youtube (as we do).

Us with Stephen and Simon and Martina! 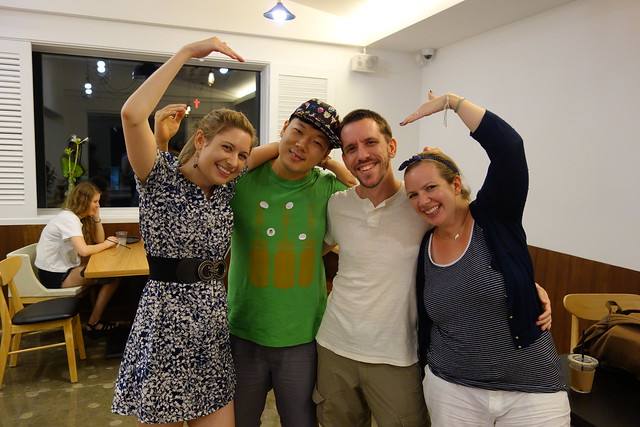 With Nic and Hugh from My Korean Husband!

Both TTMIK and EYK will be selling their merch in the cafe, and while we were there I picked up a “한국어 공부중” tote bag. They will also be using the cafe to host Languagecast every Monday, a language exchange meetup that they have been running for about 6 years now. Having their own space to host Languagecast as well as have and teach language classes has been a dream for them for years, and it’s so cool being there to see it become a reality! Congrats again to you guys!

And thanks everyone who recognized us and said hey! It was great to meet you guys and hear some of your stories. You guys made our day.

To see more photos from the day check out our Flickr page!
If you want to go to the cafe, there are video directions and a map here.

The post You Are Here Cafe: Opening Day! appeared first on Evan and Rachel.