Skip to main content
I've just finished watching Korean Drama "I'm sorry I love you" (I know I'm too late).
I want to write about the food part,where his twin seller sells by the roadside called Kimbap.

Kimbap is everywhere in Korea. You can find those at public area and most common Korean restaurant.
It's simple and easy to eat, as it's portable friendly - Some even brought along for picnic and even hiking.

For me, Kimbap taste like Japanese Futomaki without wasabi or soy sauce.
It's self contained of Korean rice and fillings wrapped in a large sheet of seaweed.
Sometime, it looks like lemang with fillings.

I've been trying to taste the Kimbap all these while.
The only and major problem that I face is that it comes with ham, at least.
Although there are variety of filling choices, sometime, some Korean doesn't understand ham is part of meat, even when I requested for vegetable Kimbap (yachae).

To cut short, yesterday as I was walking around in a large underground mall station, by the walk-way, there's this ajumma was preparing fresh kimbap in a clear window.

I see no meat at all at her station, observing each ingredients like a weird person.
I peeked and waited long enough in front of her and see what she's doing.
To be certain I wanted to ask her.

While showing at one pickle vegetable
Me : Muoyeyo? (What is this?)

Ajumma ignored me
After some few second

She sighed and shake her head to show no grumpily.
I plan to be determine this time.

Ajumma shakes her head grumpily then continue to ignore me.

Then finally, she looked at me.

At this time, i was suprised, USD 20 for a single long piece?
I nodded to proceed, just because I wanted it badly
When I wanted to pay, it is actually two thousand won = USD 2.
Funny as it seems, as I'm still not good in Korean language;
I finally consume happily my first ever Kimbap. 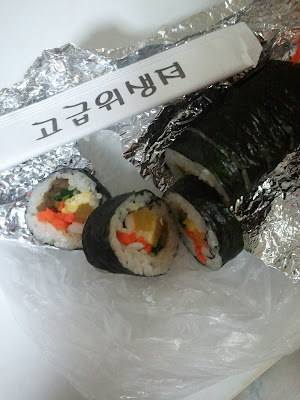