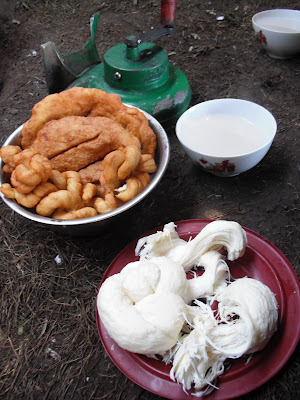 The last week or so has been pretty interesting. Instead of cruising down the Yangtze with about 1 million other people, we decided to travel through the mountains of Western Shechuan and Northern Yunnan.

The area is part of cultural Tibet, and is about as close as you can get to Lhasa without a permit. Even so I was quite unprepared for just how different it would be. Once we got above the 3000 metre level China disappeared and Tibetan villages, prayer flags and nomads became the norm.

I did have the chance however (rather tackily I know) to chow down with the family of our thirteen year old nomad horse trekking guide.

On the menu were Tibetan bread, Yak milk, Yak cheese, Yak yoghurt and Yak butter. Almost everything was fantastic; the milk was warm and rich, the cheese sweet and earthy, and the yoghurt somewhere between the two. It was only with the butter that I began to fade - our hostess mixed it into dough with some barley flour to make something called tampa. The result was way to heavy for my feeble belly, but probably the perfect thing to get through the Tibetan winter.