Marja, her chef husband Jean-Georges Vongerichten, and their daughter Chloe

Just found out that a documentary series on Korean cuisine is going to broadcast from Monday through this summer on PBS, the public TV channel.

The 13-part series, called “The Kimchi Chronicles,” was directed by the famous  food documentary maker Charles Pinsky. The show is hosted by Marja Vongerichten,  a 34-year old half Korean and wife of international super-chef Jean-Georges Vongerichten as she travels through her native homeland of Korea.  The show came into fruition after Eric Rhee of Frappé Inc., an independent production company that produces programming for PBS, heard of Marja, who left South Korea with her adopted parents when she was 4 years old. Her mother was Korean and her father was an American soldier. She has been reunited with her biological mother who speaks to her in “Konglish”. And get this …. her mother now lives in Brooklyn! Ha what are the odds of that?

Marja, with her husband, will explore Korean cuisine with visits to restaurants, markets and home kitchens in SoKo.  Celebrities including actor Hugh Jackman and his wife, and Heather Graham will also participated. Read more about her here. 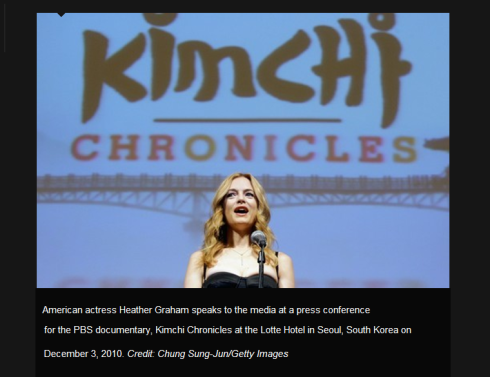 I’m excited about this show because people in America will finally get a chance to explore Korean cuisine through the eyes of someone half American and half Korean. I think it’s wonderful that she will become this ambassador of Korean culture, opening doors to conversations about inter-racial relationships, something that is slowly becoming less taboo.