The ongoing Hooker Hill arson case against Army Pfc. Marcos Pedraza-Pascual took a strange turn during the last hearing on May 22 at the Seoul Central District Court when Pedraza-Pascual revealed that he was going through out-processing to leave the military, was under restriction and had tried to “hurt” himself due to being “very depressed.”

Stranger even was the reaction of the three judges and the Korean attorney cross-examining the soldier (who began to cry after making the statements).  Following a short discussion about Pedraza-Pascual’s statement, they laughed openly and at length.  At the same time, after Pedraza-Pascual mentioned being “under restriction,” the SOFA trial observer buried his head in his hands.

The entire hearing, which included testimony by the “key witness,”–a police officer who while out of uniform found the soldier in front of a nearby bar approximately two hours after the fire and began an exchange with Pedraza-Pascual after the soldier asked him for a cigarette–screening of CCTV footage, a written statement from one of the bargirls and cross-examination of the private, concluded with the head judge stating that he would depart and decide whether to give Pedraza-Pascual three years in prison due to it being an “intentional fire.”

Pedraza-Pascual, 21, has already confessed to “unintentionally” starting the fire on November 15, 2011 at approximately 2:30 a.m. in the Tiger Tavern bar which then spread to four other bars—Best Club, Texas Club, Bar Capital and Madrid—along a hill in Itaewon, central Seoul, that is notorious for bars and prostitutes, though the area has seen a downturn in recent years due to government pressure and off-limits designation of numerous establishments by the U.S. military.

During a March 21 hearing, Pedraza-Pascual testified that he had lit a “big candle” and moved it onto a mattress near a bathroom in the back of the bar in order to reduce the stench while he used the facilities.  Then, while exiting the bathroom, he could have potentially bumped the bed, knocking the candle over and igniting the mattress.  After trying to fight the flames, Pedraza-Pascual exited the bar in a panic and tried to locate a fire extinguisher to no avail. 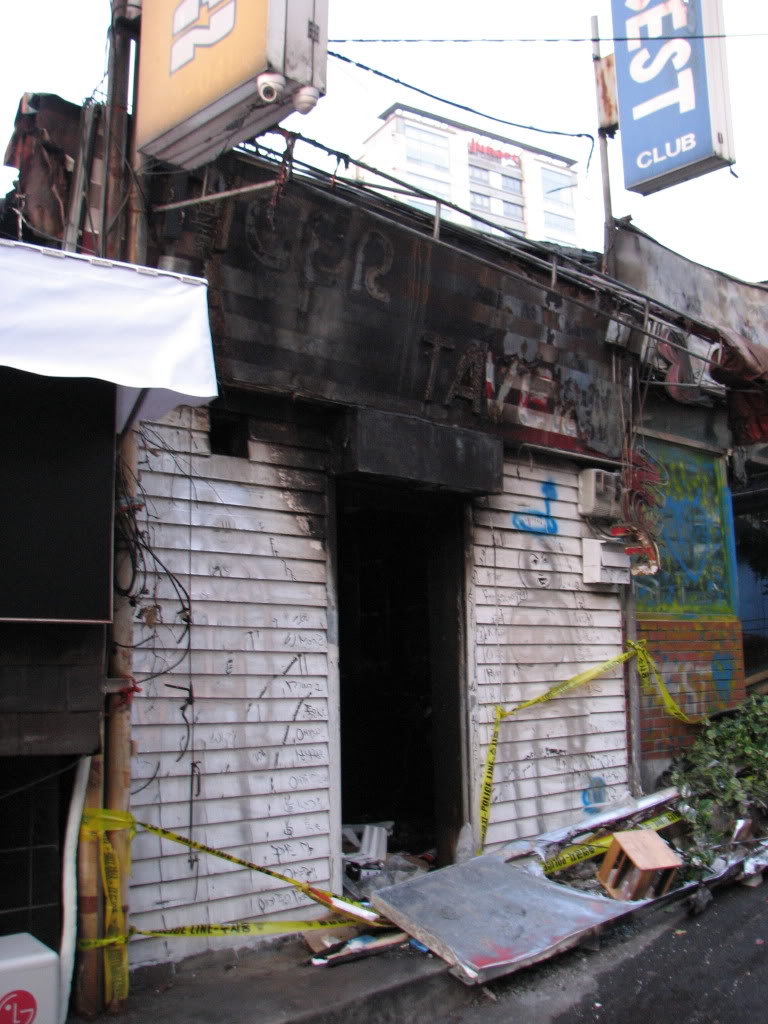 Tiger Tavern after the fire.

While being cross-examined, the private was asked to elaborate on his decision to light and move a candle near the bathroom.  “I light scented candles every time I use the bathroom,” said Pedraza-Pascual.  “I am very sensitive to smell.”  During this explanation the soldier became visibly stressed, twitching and emphasizing his speech.  Pedraza-Pascual added that the area where the bathroom was did not have proper lighting so he needed the candle for that as well.  After using the bathroom, the private testified that he came out and bumped an air conditioner unit causing it to wobble. He reached to stable it and admitted that he may have bumped the bed when he did this.

Throughout the trial Pedraza-Pascual and his attorney, Kim Jong Pyo, have maintained that the private was intoxicated during the events of the evening as he “quickly” consumed six beers on base before taking a taxi to Itaewon where he drank another four beers.  It is clear that the court holds this in question—in the March hearing the judge repeatedly asked how drunk the soldier was and attempted to lead Pedraza-Pascual to admit he really wasn’t that drunk by asking, “So you drank over a spread out time so you weren’t very intoxicated?”

Yet, in the May hearing, Pedraza-Pascual disputed the police officer’s assertion that he was drunk when the officer approached him slightly before 5 a.m. on Nov. 15 outside the King Club—the officer stated that Pedraza-Pascual was “Dancing, pointing, acting crazy and laughing.”  The private stated that he had sobered up by that time and since no blood or breathalyzer tests had been administered, there was no way the officer could support his statement.  To this the officer responded, “I know from experience, like looking at eyes and mouth.”

Another bone of contention was the assertion by the officer that when he came across Pedraza-Pascual near the King Club the soldier was pointing at the Tiger Tavern while laughing crazily.  The courtroom exchange went as follows:

Pedraza-Pascual: “Can you see bar from where we spoke?”

Pedraza-Pascual: “We can prove no. Why would he say that, that I was pointing at the place laughing?”

Policeman: “I clearly saw the accused pointing in the direction”

Pedraza-Pascual: “Could it be possible that I was pointing at something else?”

Pedraza-Pascual: “I was laughing at a ladyboy, a dancing ladyboy; I said this in the original statement.”

Pedraza-Pascual stated that he had been in a transgender bar—which was the source of his amusement—prior to meeting the officer:

“I was saying, ‘Hey, this place is crazy,’ ”said Pedraza-Pascual. “It was like a homosexual place. I was laughing at that, I wasn’t laughing at the fire.”

The officer also stated that he believed the fire had been started by a mug that was found in the toilet and disputed the soldier’s testimony—and that of Yongsan Fire Station officials—that a candle had been the source.  Again, the hearing took an odd twist when the officer began to act in some capacity as a fireman, stating that he “re-enacted the scene at the police station by balancing a candle on a mattress” and deduced that it is “impossible for a candle to fall over on a mattress.”  In response to this, Pedraza-Pascual asked if it was the same kind of mattress.  The officer answered, “Not exact, similar.”

Pedraza-Pascual and his attorney then pointed out that fire department investigators stated that the fire was not started with a “mug” and not in the toilet, and asked if the officer, as a beat cop, believed that he had more experience investigating fires.  The officer, clearly not pleased with the affront, went into a nearly five-minute, long-winded, equivocating answer during which he never said no but did admit that his conclusions had been “assumptions.”  All three judges nodded along during the response while Pedraza-Pascual stared, mouth agape, with a look of utter frustration and futility. 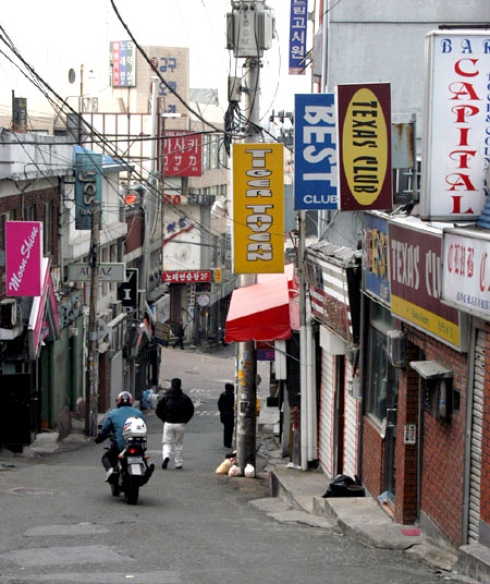 Finally, when it seemed things couldn’t get any stranger, the cuing of the CCTV took on a circus-like atmosphere when the officer and three other men began tinkering with the projector, plugging and unplugging cords, turning, flipping and shaking the device, muttering amongst and to themselves while examining every nook and cranny, and, at last, after nearly 10 minutes, cuing the wrong footage.

When the whole show ended, four different clips of grainy footage were shown.  The first two clips were not the accused but the last two showed an unidentifiable male wearing a hoodie and backpack, short and stringy, running up Hooker Hill.  Pedraza-Pascual identified the figure as himself, saying he was looking for a fire extinguisher at the time.

The footage failed to provide any solid evidence that Pedraza-Pascual was behaving in a criminal manner, just that he was running around.

The owner of Tiger Tavern, Lee Seo-yoon, testified at an April 24 hearing that does not think the soldier intentionally started the fire, that she feels sorry for him and does not want him to face punishment.

It remains to be seen what impact the disclosure about Pedraza-Pascual’s soon-to-be discharged status, his depression and attempts to harm himself, and his reported “restriction” will have on the trial.  The judge’s final words that he considered it an “intentional fire” indicated that the court was not buying Pedraza-Pascual’s defense that he may have accidentally knocked over the candle, igniting the mattress.

A verdict is scheduled for June 12 at 2:10.  3WM will follow the proceedings.