Skip to main content
The Song of the Day
I was thinking about what I wanted to write for my first real blog entry. I was suffering from a writer's block, until after watching one of my weekly Korean TV shows. Right after the show ended, I just knew that this is what I wanted to write about.
One of the ways I want to show Korea is through explaining how I see it in my everyday natural life.
Since, I am a big fan of this show, which I am about to introduce, and Korean music in general, I have decided to dedicate my second entry in Chomsongdae to these two topics.
Although I will begin by explaining what the "슈퍼스타 K/Superstar K" show is like, the thing I want to share most is a moving performance in this week's show.
*
I just watched the fifth episode of "Superstar K". I am not sure if you know about this show. Just in case you were wondering, yes, it is a Korean show, created by Mnet which is a pop/music channel similar to mtv in North America. 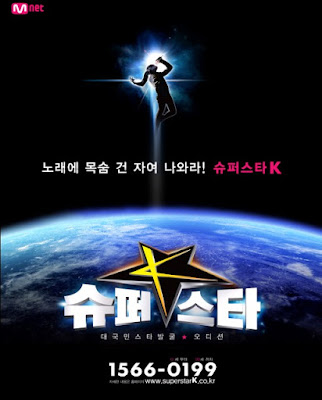 **Just in case I have some readers who are about to leave because they are thinking "I am not interested in pop", well, if you can understand Korean and want to hear a touching performance that nearly had be me teary, please stay! **


So... back to "Superstar K"
This show is the Korean version of American Idol. The idea is that millions of people of any age living in Korea can audition and compete to become the one and only "Superstar K". This person will be awarded 1 million won (won=Korean currency) which is approximately $100,000 US. Also, they get a contract with one of the best entertainment management companies in Korea and have the honour to perform in the year end Mnet Km Music Festival which is a very important music awards event. In 2008, Big Bang won the top award which is the "This Year's Top Award".
Basically, “Superstar K” is THE chance of a life time because according to the "Superstar K's" official website (only in Korean) , the lucky winner will have their album released within a month. A month??
That is really amazing considering the long years many Korean idol stars (pop stars popular among teens) spend in training. For instance most members in the popular boy band group Super Junior spent 5~6 years as trainees under SM Entertainment.
*
Today, there have been an increasing number of success stories of Korean pop singers who have made it to the top nationally and internationally. For instance, the Wonder Girls, which is a group made up of 5 girls gained tremendous success in Korea with their three #1 singles "Tell Me", "So Hot" and "Nobody". Since then, the girls have made their US debut. Some of you may have heard that they recently toured with the Jonas Brothers in concert this summer.
Thus, with many rumours and stories of success and with programs such as "Superstar K" that guarantees stardom for its winner, it was expected that many people would come audition to get the chance to become a popular singer.
And, there were many people! Apparently, a national record was set for having the greatest number of people auditioning for a reality show in Korean history. Celebrity judges included singers Lee Hyo Ri, Lee Seung Chul, and many others toured the capital, Seoul, Incheon, Gang-reung, Dae Jun, Guang Ju, Dae Gu, Busan, and Jeju Island looking for the special talent. 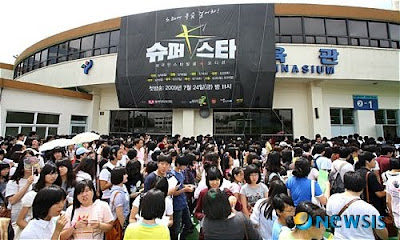 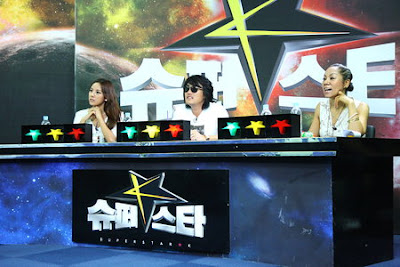 Lee Hyo Ri, Lee Seung Chul, Insooni were some of the celebrity judges

*
The first four episodes of the show presented some highlights of the preliminary rounds. Today’s episode was exciting because it was the first time viewers got to see 129 of those who qualified from the preliminaries up close and personal.
In the first half of episode five, the two judges, Lee Hyo Ri and Yang Hyun Suk (head of YG Entertainment whose singers include 2ne1, Big Bang, Se7en, etc.) narrowed down the choices after listening to the auditioners’ solo songs. 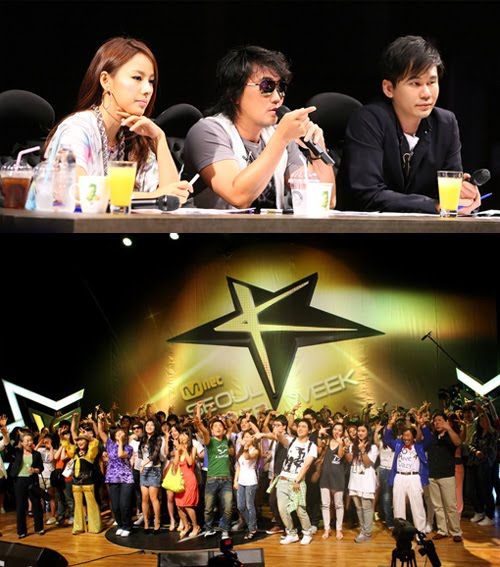 In the second half of episode five, the remaining contestants were put into groups of 4-5 to perform.

*
Among the groups shown, the group called 여인천하 (literally translates to women rule the sky) gave a very moving performance of the song 심장이 없어(Heartless) by the group 에이트(Eight).
It is really hard to explain why it was so moving, but if you want to see it, I suggest you watch the whole episode five. (Or you can just see the group’s performance. I have provided the links at the end of this blog)
Basically, all the other groups before 여인천하 did not seem to work well together as a group. As they entered on stage, I got an unmistakably feeling that the group was very united.
Before they began to sing, 김국환/Kim Gook Hwan who is a blind contestant in this group 여인천하 gave a brief thank you to his group for accepting him into the group and being considerate of his disability by choosing to perform a slow paced ballad song instead of a lively dance song. I am not really sure if this group chose to do a ballad because 김국환 cannot move around freely because he is visually impaired. Whatever the reason, it was moving to hear what 김국환 had to say. Many thoughts crossed my mind.
How many times did this guy feel discriminated against because of a disability he has no control over?
How many times would he have wanted to perform with other people?
How hard was it to memorize this ballad in one night, without seeing the lyrics?
And then, they started to sing... Unlike previous performers, everyone in this group was very calm on stage and very much in control of their singing. No one was trying to stand out or put themselves ahead of the group.
Everyone sang as a team for the team with all of their parts memorized.
The lyrics really represented some of my feelings before the group performed.
The first line was
아프다고 말하면 정말 아플 것 같아서, 슬프다고 말하면 눈물이 날 것 같아서, 그냥 웃지, 그냥 웃지. (If I say it hurts, it might really hurt. If I say I am sad, tears may fall, so I just smile, so I just smile)
You just have to see the video. (Link for the video is at the bottom of this blog entry)
Wow. Now, that was moving. Lee Hyo Ri who was judging showed some tears while the group was performing. 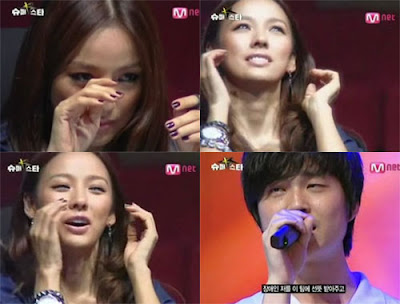 김국환 pictured on the bottom right

I am sure many viewers out there were sniffling too. It was just awesome to see that performance for many different reasons.
I wanted 김국환 to do well and show the world that he can do this. If he was ever told that he could not do something in the past because of his disabilities, I hoped that this performance proved those people wrong.
I loved how the group was so together. In a competition that is all about standing out as an individual, their group performance screamed UNITY.
*
The best part of all was when all five of them in 여인천하 were told that they made it through to the next round even though the judges are supposed to limit their choices to a maximum of two people from each group advancing to the next round.
What can I say anymore? It was just beautiful!
The song of the day is Heartless by 여인천하
Video clip of the group’s performance on YouTube
Part One
Part Two
(By the way-sorry there are no English subtitles for this video)
*
Episode 5 of "Superstar K" reminded me to take heart in this world filled with so much competition, jealousy, anger, war, and inhumanity. It is not often that you can feel like this after watching a reality TV show, but it happens sometimes, so I hope you can watch this and take heart as well!
As we say in Korean, everyone 아자 아자 화이팅! (Aza, Aza, Fighting!) 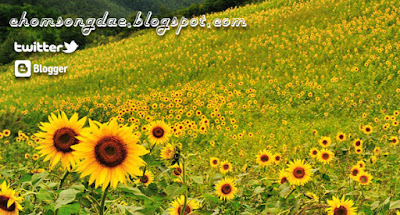