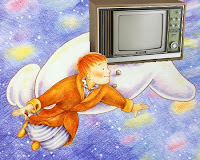 Christmas was designed for TV. The combination of debilitating meals, cold weather, time off work and a high family member per square metre ratio conspire to make silently vegging out in front of the box an extremely attractive option. And just as normal concepts of time go out the window (can you truthfully see anything but a hungover black smudge when you think of the 1st January?) so too does normal scheduling. For these two or three days of the year we are a captive audience and the listings positively twinkle with festive delights – if you know when and where to look. All too often however the pressure of buying presents, talking to people and the omni present box set mean that some of the best shows are neglected, only coming to light days or weeks later with a passing glance at the TV guide as the Duchess tosses it into the recycling.

Therefore to avoid tears before New Year’s TVC, being the essentially philanthropic enterprise it is, has assembled the very best of viewing in one tragically under visited website. This means that all you have to worry about it whether to drag the TV into the kitchen or bring the mountain to Mohammed.

Surrender your senses to TV Casualty good citizen as we play spot the pun and fly – snowman style – through the wild and varied digiscape of Christmas TV land.

Kicking off Christmas Eve Gordon Ramsay sticks one to the yanks in Ramsay’s Kitchen Nightmares USA (C4, 9PM) where we presumably get to see Gordon hawk his highly sellable mix of humiliation and inspiration to our American cousins. As we all know by now, Gordon doesn’t mince his words and demands his subjects eat a large slice of humble pie so it will be interesting to see how this plays out across the pond. Completing his monopoly of prime time Channel 4 we are also being given The Best of The F Word (C4, 10pm) followed, bizarrely, by Ramsay’s “favourite film” Sexy Beast. (C4, 11:10pm)

If you couldn’t give a stuffing about Gordon or think his favourite flick is a turkey (It isn't, though I can’t imagine him sitting still long enough to watch one film, never mind enough to justify a favourite film) then ITV 2 is the place to be as they run a double bill of petrol headed thrillers The Fast and the Furious (ITV2, 9pm) and 2 Fast 2 Furious (ITV2, 11pm.) It may surprise you to learn this but behind the rapier wit and sophisticated veneer of TVC beats the heart of a moron, so this potent mix of cars, girls and guns will make its presents felt...

If none of that does it for you then back to back episodes of Father Ted (More 4, 9pm) should ensure a warm rosy glow in the living room before you hightail it up the stairs so Santa can fill your stocking in peace. If that doesn’t satisfy, your dead and I can’t help you.

Moving into the big day EastEnders (BBC1, 6:20pm & 8pm) stands out as a deal breaker. Bradders and Stacey have been grinning out of the cover of every TV guide worth its salt for the last few weeks now to maximise the effect as Max and Stacey’s affair is exposed to a stunned Brannan Family Christmas via the under-rated medium of video. Aside from that it will snow, Good King Wenceles will be played by a brass band and everyone will end up in paper hats in the Vic – a traditional East End Christmas.

As EastEnders begins its second showing of the day Harry Hill’s Christmas TV Burp (ITV, 8pm) gets underway on ITV. I probably should leave this out considering it is “an irreverent look at the Christmas TV schedules” and will no doubt expose TVC for the imitative, third rate sloppy mess it is, but that would be unprofessional. The man is a genius and as soon as I loose my hair and get a few shirts with outsized collars I’m moving into TV. Watch this.

Film-wise The African Queen (C4, 6:10pm) ticks the “they don’t make ‘em like they used too” box as Humphrey Bogart and Katherine Hepburn star as the drunken sailor and prim missionary taking lumps out of each other in the Congo, and The Motorcycle Diaries (C4, 10:35pm) biopics a youthful Che Guevara as a trip around South America sows the seeds of revolution in his soul.

If you’re still left groping in the dark despite this, you can turkey fart your way through back to back Peep Show (E4 from 9pm) while The Sopranos (More 4, 12:40am) continues to storm its way through the back catalogue heedless of man or religion.

Break out the box sets on Boxing Day as the schedule looks pretty bereft, I’ll be working my way through Arrested Development. Highlights for the next five days of Christmas include the last ever series of Extras (Thursday 27th December BBC1, 9pm) which includes cameos from David Tenant, George Michael, Gordon Ramsay and Clive Owen (?,) the first episode of the new series of Shameless (New Years Day C4, 10:10pm) and Meet the Fokkers (Friday 28th December BBC 1, 8:30pm.)

Ignore this advice at your peril, and have a good Christmas.