JTBC's new television program "Run On" is apparently very LGBTQ+ positive. This Newsen article has put Run On on my list of potential Netflix shows ... even though the article was rather difficult to translate! Nice to see that Run On is a member of the growing number of K dramas with queer content.

Painting a picture of love that falls outside of the 'normal method' has left viewers with a deep impression.

On February 3rd, the 15th episode of JTBC's Wednesday/Thursday drama "Run On" (script by Park Shi-hyeon / directed by Lee Jae-hun) had a scene that stretched hetero contents.

"Are you dating someone? Ah, there is a question that should come first, right? Do you include men as targets of your affection?" 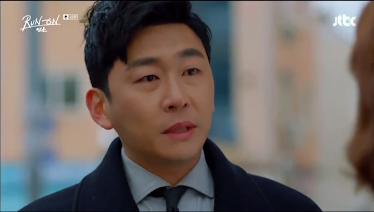 This is the line chief secretary Ji-hyeon Jeong (male, played by Yeon Jae-uk) who falls in love with Mae-i Park (female, played by Bong-ryeon Lee) at first sight while handing his business card to her. In this way, "Run On" shows a prejudice free sort of love, showing not only the feelings of those who have heterosexual attractions.

Similarly, Yeong-hwa Lee's (male, played by Tae-u Kang) friend Ye-jun Go (male, played by Dong-yeong Kim) is a gay man. When he tries to justify his sexuality to his mother Dong-gyeon (played by Jae-hee Seo), the show presents an image of how difficult it can be to live as LGBTQ+. Unlike his mother whose heart breaks when he comes out, his younger brother Ye-chan Go (played by Shi-eun Kim) has a very mild reaction.

Furthermore the heterosexual Dan-ah Seo demonstrates over and over again prejudice-free thoughts when it comes to sexual preferences. With her quick senses, she realized that Ye-jun Go was gay. However, she was considerate, without discrimination or prejudice toward someone who had note yet come out. She solely looked at him as a person.

"Run On" paints a picture of characters who have cast off their 'typical' lives, surprising viewers. Including scenes that would normally be rare in a Korean drama, which generally portray solely heterosexual life, has resulted in an explosive response. In this way, "Run On" encourages people to think about gender identity by discussing several concepts that relate to LGBTQ+ people. This has stunned people who naturally assume everyone is straight.

"Run On" depicts LGBTQ+ people several times in a gentle manner, giving support and courage to LGBTQ+ people. Finally, it demonstrates ways heterosexuals who have wariness or prejudices toward homosexuals need to grow intellectually and presents a new perspective.

Love without discrimination viewed as 'regular love' within "Run On" is the dream of LGTBTQ+ individuals: the right to not be discriminated against based on their sexual preferences. "Run On" courageously presented the problems that our society should address by showing social change as a result of shedding the current dichotomy. The sophisticated directing and the theme of young people's sympathy are attracting audiences.