Phnom Penh on the shores of the Tonle Sap River.

Phnom Penh is not yet a CNN.go city. What it is is a go-kart city. Every sound and smell on the street is equal to that of a frenetic pit stop. Any vehicle that burns gas is welcome in Phnom Penh, and it’s saner to grin and then hop on the back of one that is temporarily still instead of letting your jaw drop and wonder how did you dip into the outer vestibule of Dante’s Inferno.

I was five hours late for check-in at The Sundance Inn and Saloon on one-seventy-deuce street, but it just didn’t matter. Next week, below in the hotel bar, is a party for one of the proprietors’ birthday. Harry is 48 and to celebrate; there’s free Rum, Gin, Vodka, Jim Beam, Jack Daniels etc. And even when it’s free from Harry with love, the pour is mighty strong (doubles as a rule). Videos of Cyndi Lauper counter thrusting Captain Lou Albano, and of Alice Cooper shouting about Poison rotate on the screen. And even when listening to A-Ha’s Take Me On for the third time it’s undeniable that with acacia wood on the guestroom floors and Spanish floor tiles marking the windows all through the place, The Sundance delivers service and friendly cheer measuring up to any traveler’s standards.

And this is important, for when you step out onto the enticing mayhem of one-seventy-deuce street, it’s all jive talkin’ and Phnom Penh’s special distortion on the street: 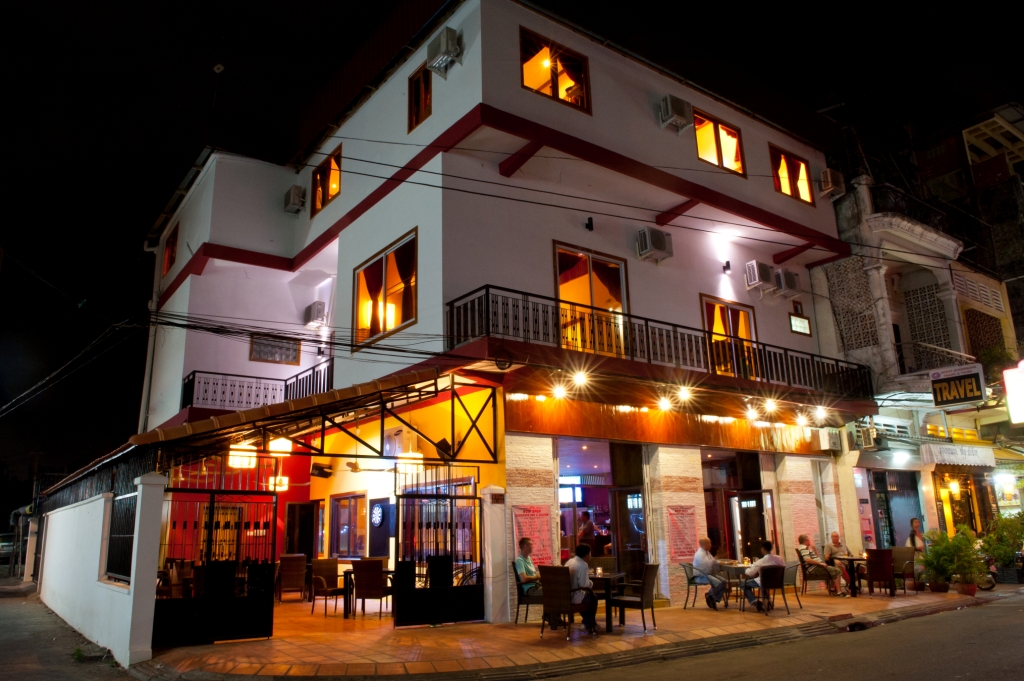 The Sundance Inn and Saloon.

Sure, The Sundance is cultivated well and is a soft landing place in Phnom Penh but it won’t be long before budgeting becomes part of the equation for most long-term travelers. A bit of serendipity has across the street, still on one-seventy-deuce, Longlin Guest House–a sure find. A middle-of-the-road flophouse where you do have your own room but somehow the bathrooms on the same floor are all set together en suite style and the daytime tourist agendas and nighttime confessions can be heard by all. That can be kind of fun yet the Wi-Fi at Longlin never works, and the TV and the fridge can’t operate at the same time: there is only one operating plug per room. Anyway, you want to choose to experience the engines roaring and the plugs not working–in short it’s part of the working definition of moving to a developing country.

Whether you ever opened and read a magazine with more words than pictures or not or reckon Facebook to be built with interesting stories or too full of schlock and swizzle, all visitors to Phnom Penh have opened a tourist guide and come to the pages about the Foreign Correspondents’ Club. It’s a vaunted place where journalists, politicos, and linen-dressed Brits were meant to plan about post-dictatorship Cambodia. The well preserved bar and restaurant is all post-pain now, and it’s all about experiencing Mekong and Tonle river views of a blah-blah-blah fascinating city. Still, walking up to the second floor bar there is an excitement that you’re going to a former “hotspot” where life and death were open protagonists and someone could call you out for a press run in their death mobile: perhaps to a spot where activists and journalists are getting shot for reporting about illegal luxury wood logging. But stop your daydreaming right there. The only chance of getting, “in the shit” in the current FCC is by staring above the bar into the cable TV which is showing National Geographic’s episode of “Asia’s Largest Jail.” 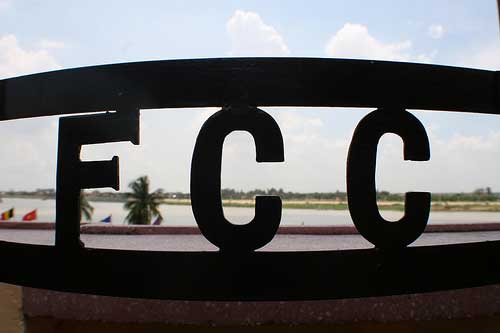 About the most exciting thing about the Foreign Correspondents’ Club of Phnom Penh is the unisex bathrooms. If there is such a blight as hyper-tourist-modernity, the FCC Cambodia avoids it by giving the riverside a historical landmark in the same way that Saloon#10 does for the only town in the world that was ever dustier than Phnom Penh, Deadwood. 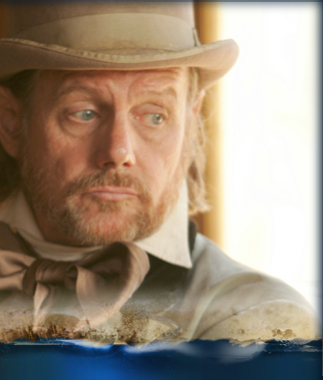 More comparisons between Deadwood and Phnom Penh jump you when you go back to Harry and Buster’s bar at The Sundance. Patrick is the first local expat I met in Phnom Penh. He is skinny with a scarred up torso from numerous collisions with walls and roadblocks. He assured me I would, “Fit in well, around here,” and went on to tell me how both his mother and Jerry Garcia were for sure in heaven and would be keeping an eye on him in a place like Phnom Penh. He sprinkled Old Testament truisms and clipped phrases into his ranting and after several Gin and juices, I was sure I was in the presence of E.B Farnum. I have since found out that “buzzhead” Patrick is banned from Sundance for various forms of annoying behavior and activities–go figure.

Throughout a go-out night in Phnom Penh it’s impossible not to rub shoulders with–I guess–the expat elites here, AKA the NGO girls. You can recognize them because they are mostly man-less and are sure to keep their ballast by drinking mocktails. It must be some kind of developing morality play where the upper-middle class women don’t drink alcohol in public because they are here in Cambodia to do good–to make a difference, of course, that remains to be seen.

Even in front of the trendiest club in Phnom Penh it still seems like just another pit stop in go kart city. The dust charged roads seem impenetrable to night light, and late in the night, I spoke with a local expat English teacher, 20-something Matt from New Orleans, who is planning to take his girlfriend on a “blindfold birthday party.” He will blindfold her then take her to a swanky restaurant and then back to the local bar. He informs me, “Khmer schools have stopped teaching about the killing fields. They just want the students to ignore all that.” Ah ha, sounds like the doings from inside a country that wants to make sure that its capital does one day become a CNN.go city. This too remains to be seen.