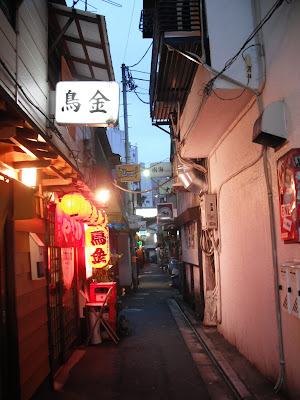 So it turns out Tokyo isn't much of a street food town. I came here expecting to see stall after stall of vendors selling everything from takoyaki to sashimi, but so far I've yet to lay eyes on a single solitary pushcart or portable grill. As such, my dream of eating cheaply in Tokyo whilst filling post after post with lurid descriptions of food I can only dream of, looks like it might be over before it even began.
But that's not to say I haven't been eating well. Since arriving yesterday afternoon we've spent a fair portion of our time peering and gesturing our way into some of the most interesting meals I've had in a long time. Tokyo heaves with little nook and cranny eating joints and food halls, and though they may not be strictly street, I think they nevertheless deserve a write up.
Freshly checked into our traditional Japanese inn (i.e. expensive and lacking in amenities) we popped our Tokyo cherry by ducking into one of the many ramen joints that line the main street of our new hood, Takodanababa. These places have a novel way of keeping human contact to a happy minimum by requiring you to purchase a ticket for your meal at a vending machine. As everything is in Japanese, this could easily have turned into a hit-it-and-hope situation save for the friendly cook who came out to give us a helping hand. 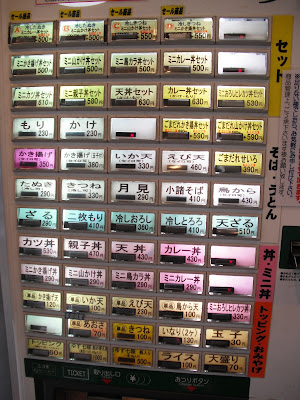 When the smoke had cleared, I ended up with a crispy tempura of onions, carrot and potato on a bed of thick round noodles (not shown in picture.) Surprisingly, everything on the plate was cold, which perhaps has something to do with how everything there seemed to be focused on a speed - a few customers came and went in the time it took for Sarah and I to fumble through our own meals. 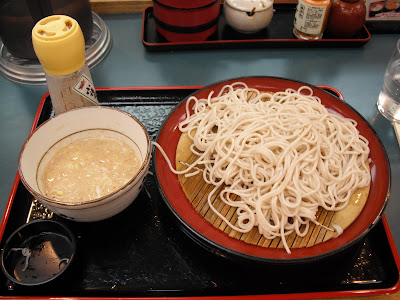 Later that night, we decided to hit Shinjuku and Kabuchiko on the the hunt for food and sleaze. Unfortunatley, Kabuchiko didn't turn out to be the all-out assault on morality we'd been hoping for, but foodwise things went a little better. Our first stop was a small beer and yakitori izakaya close to Shinjuku station. I ordered a skewer of chicken thigh, another of crispy chicken skin and one of pork cheek. The meat was tender, flavoursome and daringly pink, coated with a slightly sweet/spicy "Japanese sauce" and infinitley morish. 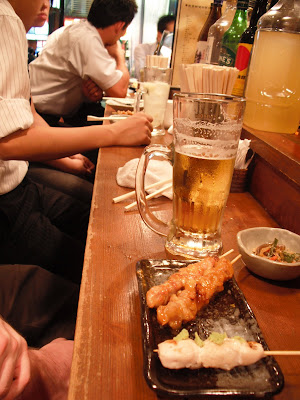 Still hungry, I then moved on to a standing-only takoyaki place I'd spied round the corner. Here, four substantial octopus balls were of a reasonable price and came covered in Japanese mayonnaise and katsuobushi. The balls were crispy on the outside, mouth searingly hot and possessed of a substantial pearl of octopus in the middle.
We kicked off Saturday in the upmarket district of Ginza for a cruise of one of the many upscale department store basement food halls called depachikas. My search turned up a couple of free samples and an exceptional olive, anchovy and cheese calzone that cut me to ribbons with a sharp/salty edge that made me think I'd momentarily left Asia. 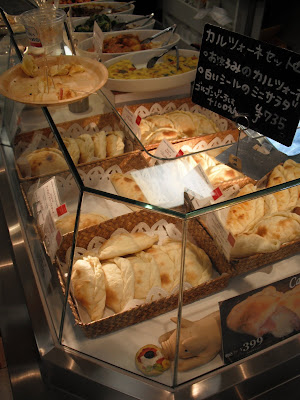 Later, we rounded off the day with a Tonkatsu, the breadcrumbed pork cutlet closely related to the Korean doncass that used to brighten up my Friday lunchtimes. The cutlet was thick and juicy, covered with flaky golden breadcrumbs and swimming in a curry sauce that reminded be fondly of my teenage half-and-halfs (half fried rice, half chips and curry sauce at the bus shelter) 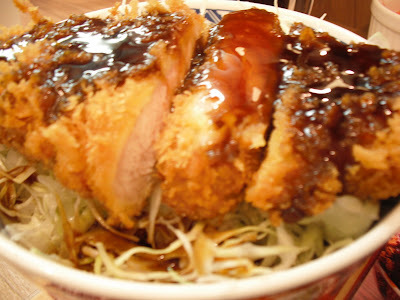 That's it so far - hopefully I'll see some street food soon and really get the trip started!

END_OF_DOCUMENT_TOKEN_TO_BE_REPLACED
Do you think masks should still be required on public transportation in Korea?
Yes
58%
No
42%
Total votes: 118