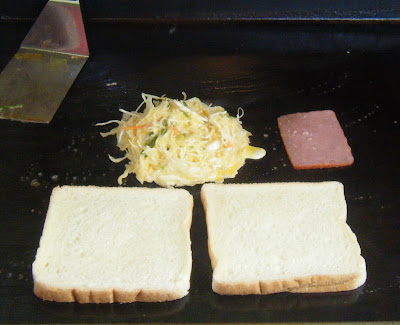 Toast, pronounced toa-se-te, is the pot noodle of Korean street food. Sold at literally hundreds of hole-in-the-wall counters across the city, it consists of an omelette-like mixture of egg and onion, a slice of spam(!) and some slightly sweetened bread cooked on a larded-up hotplate and made to resemble a toasted sandwich.

Sound unappetizing? It kind of is, but something about toast nevertheless keeps me coming back. One of these occasions was Thursday afternoon when I decided to bridge the gap between lunch and a late dinner of Shabu Shabu with a trip to my local toast counter after school (I say local, but it actually took me a good fifteen minutes walking in the opposite direction from my apartment.) 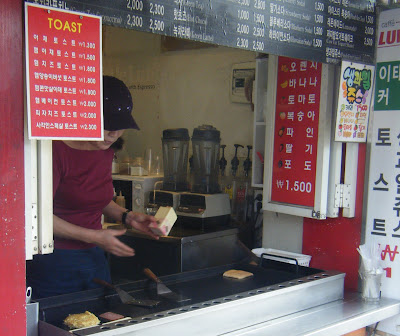 Once there I wasted no time in ordering the usual (ham yachae toast) and before I knew what was happening I was ready to go. Approaching it with my usual disregard for cooling time the first bite was mainly heat, as the scalding egg omelette insinuated itself around my mouth. This part of the sandwich was firm, reedy and largely inoffensive, though probably would have benefited from a bit of salt. Underneath the egg lurked the spam, which also by and large managed to stay out of the picture. Instead, the dominant taste undoubtedly came from the liberal amount of yellow and pink sauces applied at the end of the cooking process; a synthetic and oddly chlorinated mustard cocktail that left me feeling a little like I’d just done ten lengths in the baby pool with my mouth open.

No doubt about it, toast leaves you feeling slightly sheepish, but there is something about this amalgamation of wrongness that I can’t help but revel in. It is also cheap, portable and filling, and although I may from time to time balk at its ingredients, toast somehow manages to transcend the sum of its parts and provide something uniquely Korean.