Skip to main content
From: http://news.yahoo.com/north-korea-suspends-last-project-south-putin-cites-001526987.html
By Christine Kim and Joyce Lee 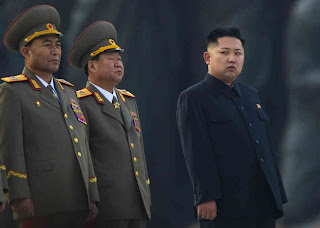 SEOUL (Reuters) - North Korea warned foreigners in South Korea on Tuesday to quit the country because they were at risk in the event of conflict, the latest threat of war from Pyongyang.

Soaring tensions on the peninsula have been fuelled by North Korean anger over the imposition of U.N. sanctions after its last nuclear arms test in February, creating one of the worst crises since the end of the Korean War in 1953.

"We do not wish harm on foreigners in South Korea should there be a war," said the KCNA news agency, citing its Korea Asia-Pacific Peace Committee.
Last week Pyongyang advised embassies there to consider pulling out in case of war. Earlier on Tuesday, North Korean laborers failed to turn up for work at a factory complex operated with South Korea, effectively shutting down the last major symbol of cooperation between the hostile neighbors.
Few embassies in Seoul have advised their citizens to quit. The United States, which has also been threatened by Pyongyang, has said there were no imminent signs of threats to American citizens.

This is the news which I read today. Just sharing what are your comments? Write below!
Regards,
Kojeblogger