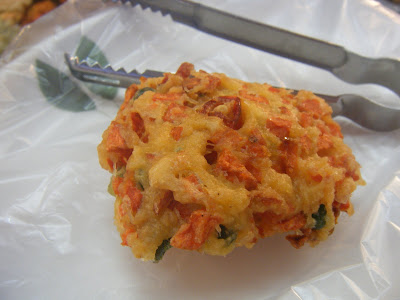 A while back I wrote about Korean Tempura, the lightly battered and deep fried bits and pieces that seems to be one of the most popular street foods here in Busan. At the time, I was in the middle of open class hell (just finished!) and found my stall of choice to be fresh, satisfying and cheap.

A few days ago I visited another tempura stall and realized I could probably start a blog solely about the different food that manages to make its way into the deep fat fryer. Having just spent the best part of six years of my life living in the land that gave the world the deep fried mars bar, I thought I was unflappable. It turns out I was wrong.

What attracted me to the stall in the first place was the onion bhaji looking construction at the top of the page. With a little help from an onlooker, I ordered and found it to be mixture of thinly shredded potato, carrot and chili. Good in principle, but by the time it reached my plate it was cold and dry, though the soy sauce it was served with did manage to lift it up a little. 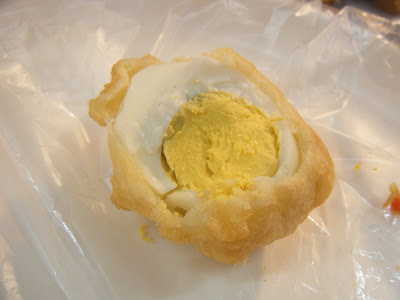 Next I moved onto a suspicious looking ball of batter I’d been eyeing up for a while. When I bit in, I found it to be none other that a whole boiled egg. Again, the batter and the egg were cold by the time I bit into it, leading to the incredibly rare situation wherein I was unable to finish what was on my plate!

I also saw battered sesame leaves and a few other unidentifiables sharing the same stall - feel welcome to pitch in with any strange tempura discoveries of your own!