Skip to main content
Perhaps its the atmosphere of living next to Igigdae Hill/Park where two gisaeng jumped off the cliff with a Japanese general inspiring me. Old legends have a certain power that grows beyond what a real factual account would have. The story sounds suspiciously like another story "a patriotic kisaeng named Nongae in the late 16th century...while entertaining Japanese generals at the Choksongnu Pavilion that overlooks the Nam River in South Kyongsang Province, Nongae led Japanese general Keyamura Rokusuke to a cliff, embraced him and cast herself into the river, killing them both". I found the latter version of the story here @ Han Cinema. The story sounds more reliable than the Igigdae story which doesn't mention which general and gisaeng. Perhaps the Igidae story came from this one.

The story of the gisaeng taking out a general reminds me of the story of koreas ninja the Ja-gaek who were male acrobats trained to be assassins by a korean general of the Hwa-ryung warriors...but I digress...

Lately I've been reading up on all things gisaeng. Gisaeng were the Goryo and Choseon Dynasty entertainers. They were very much like the Japanese Geisha. Later this week I shall find myself in the comic book room beneath the Kyungsung McDonalds reading "Gisaeng Iyagi/Story" by Kim Dong-hwa.

One of the most legendary gisaeng was Hwang Jini. In part, due to the success of "Memoirs of a Geisha" back in 2005, interest in Hwang Jini sparked the production of both a Hwang Jini movie and TV series.
Of the gisaeng she was one of the more prolific, writing 60 shijo poems that still survive today, (I've got a book on order about gisaeng shijo poems, book review coming in a few months...).
Her beauty and talents became legendary as she charmed great scholars of the era, among them a Buddhist monk named Jijok who later was excommunicated because of her. 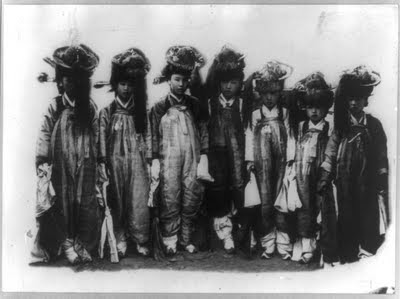 This picture entitled "7 girls" from the Franklin Francis Carpeter Library of Congress Collection shows 7 young girls who were gisaeng in training. Girls as young as 8 years old began training as gisaeng becoming actual gisaeng at 16 or 17 years old.  According to legend, Hwang Jini was the illigitimate child of a yangban and the gisaeng Heon Keum. 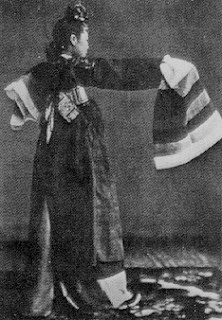 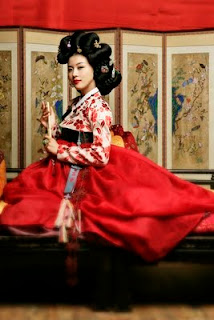 In 2006 actress Ha Ji Won played Hwang-Jini in a TV series entitled Hwang-Jini.  I'm wondering what happened to the 2007 TV production entitled Haeauhwa  (해어화, 解語花) which is about another, though less famous, gisaeng. You can pick up some parts of the Hwang-Jini TV series with English subtitles on youtube. Though to watch the entire series you'll probably have to purchase it on DVD at Someyeon's DVD/CD store. The one with all the korean TV series' on DVD there. 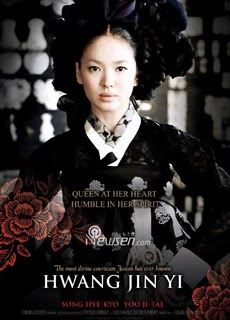 Actress Song Hye Kyo playing Hwang Jini in a movie (I'm off to rent and watch it this afternoon. Most video stores here have a copy of it. All you have to do is give the video store your phone number to start an account with them and maybe your foreign card which has your address. Videos are usually 2000 won each for 1-2 days. 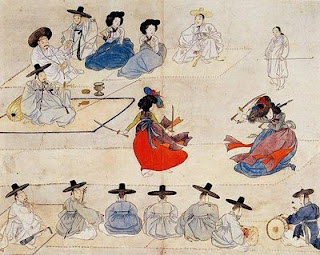 As Harvard Professor and shijo poet David R. McCann relates,  "some of the most famous kisaeng poems were composed to persuade prominent scholars to spend the night".
Here's one by Hwang-Jini below:

Don't be proud, clear water/Byuk-GyeSoo of running free to the beach!
You will find it hard to go back, once the azure ocean you reach.
Take a break, while the moon is bright in the sky, I beseech.
--Hwang-Jini. Translated by Kim Young Nahg.

As part of the Hwang-Jini craze that has swept Korea, Korean Vogue brought a bunch of models to Paris and dressed them up like gisaeng for a photoshoot. Later I'll bring you more of Hwang-Jini and other gisaeng's shijo poems. Until then, I'm logging off so I can watch the Hwang-Jini movie. Till next time...
--MWT. 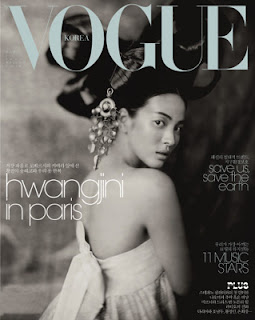