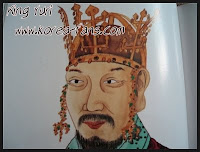 In the year 17 BC, King Yuri of Goguryo had a problem. His two wives Hwahi and Chihi were not getting along prompting one of them to go back to her hometown in China. Feeling understandably torn King Yuri wrote a poem which became what is considered to be the earliest example of the Korean poetic tradition. Many parts of the poem are in Chinese and I'm currently just starting level 1 of chinese so I was lucky to find the poem translated into Korean from which I translated it into the English presented to you here :
the (bracketed) parts are the phonetic pronunciations for the Chinese. Some say the poem is titled Yellow bird's song. On close inspection it appears the poem almost has two titles: Yellow elegy or Oriole's Song. Perhaps King Yuri was caught between two titles along with being caught between two women...

黃鳥歌(황조가)-琉璃王(유리왕) Yellow elegy --King Yuri
꾀꼬리의 노래-琉璃王(유리왕) oriole’s song -- King Yuri
翩翩黃鳥(편편황조) : 펄펄 나니는 저 꾀꼬리 fluttering flying, that oriole.
雌雄相依(자웅상의) : 암수 서로 정답구나. Female and male birds look lovely together
念我之獨(염아지독) : 나의 외로움을 생각하니 I think on my loneliness
誰其與歸(수기여귀) : 그 누구와 함께 돌아가리.  With whom would I go back to?
Hence, King Yuri of Goguryo's dilemma. For those just learning Korean it's fun to sound out the bracketed parts to form the sounds of the original Chinese character poem. A fine first step to eventually reading Korean. Poems are also very rewarding practice. A few words with a dictionary and presto! You have a translation. --MWT.
—