T-ara won the ‘triple crown’ on January 29th’s episode of ‘Inkigayo‘, but unfortunately, it looks like the public is more preoccupied with a member’s wardrobe malfunction on stage.

During their live performance of “Lovey Dovey“, T-ara’s Hwayoung accidentally exposed her breast during her dance solo. A screencap is already making its rounds online through Korean media portals and other SNS services like Twitter and even tumblr.

News reports have begun to blow up after a screen capture of T-ara's Hwayoung was released on portal websites. Hwayoung became the #1 searched term on Naver, Daum and numerous other websites after the sceen capture was released.

The photo reveals an extremely terrible wardrobe malfunction, with her top slipping completely off on one side. Hwayoung was performing on stage, during SBS' Inkigayo when this incident occurred. Fans have begun tweeting and posting on websites with strong words against the dresser and stylist of Hwayoung, for not ensuring this would not happen.

Editor's Note, Jan. 29, 2012: To all those searching for "HwaYoung's breast", prepare for disappointment.  This " extremely terrible wardrobe malfunction" is really just a nipple peeking through a sheer top. 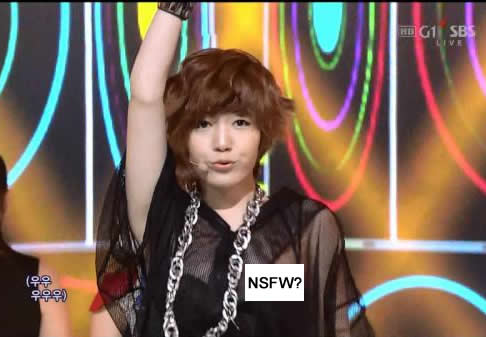 “Because of Hwayoung’s young age, she was very shocked and frightened by the event. Even now, she remains very shocked. The incident was purely accidental as it happened due to the loosening of the tapes that held the microphone wires under her outfit”.

“Rather than celebrating, T-ara members are more fixated on trying to make Hwayoung feel at ease.”