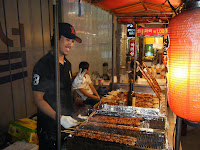 There are aspects of Korea that often make it appear to occupy a “third place” between the developed and developing world, and one of these is the prevalence of street food. While such food in the West is largely limited to a few after-hours burger vans or greasy hot-dogs stands, here it often seems like every intersection has something temptingly sizzling away for a couple of chun (1000 won) a piece.

One such culprit is paejon, a potato-based pancake laced with green onions and red chilli that can be found in the old shopping district of Nampodong, next to the “world famous” Jagalchi Fish Market. These start life as a thin doughy batter ladled onto a hotplate where they bubble away for a few minutes before being sliced up and served on a plastic covered plate. Eaten straight off the cart dipped in some of that wonderous dark soy sauce with sesame seeds and chilli, paegon is the perfect way to split up an afternoon spent scouring the markets for bargains without blowing your appetite.

Often found sharing a hotplate with paejon is fried mandu, a light dumpling filled with shredded pork and bean sprouts. These little beauties are a Korean staple and more or less annihilate any negative connotations the word dumpling might conjure up – substantial enough to feel like you’ve eaten but light enough to stop four of five from turning into an ordeal. Mandu can also be found bobbing around in a bowl of Ramyon (noodle soup) in any Korean diner, but I personally prefer them the street way – lip searingly hot and shoulder to shoulder with the proles.

Elsewhere, cups of dried octopus tentacles make an interesting but as yet untried option, while tubular rice cakes in a colon bypassing hot sauce are a Duchess favourite and the type of thing people say puts hairs on your chest. The same hot sauce also comes smeared all over pieces of skewered barbecued chicken (see picture) that are undisputedly good but impossible to eat without getting all over your face.

On the less appetising end of the spectrum, Bondegi (boiled silkworm larvae) make an exotic if gut-wrenching alternative. A hangover from poorer times, these slater–like critters smell and taste pretty much as shitty as you’d expect but seem to enjoy steady business along the beachfronts of the city. Also on the rather-not-rosta is battered sausage on a stick, which has the consistency of spam and wet cardboard and is a singularly greasy and unpleasant experience.
Silkworm and sausage aside, Korean street food has so far been an eye-opening experience.

Standing at a food cart on a busy Busan street enjoying a good, cheap plate of paegon or mandu I feel divorced from my former attitude towards food. I used to imagine one day visiting restaurants with price-tags higher than my council tax, but that isn’t food, its status, and I’d now much rather risk six months of diarrohea eating the backstreets of Asia than spend an hour getting fleeced in one of those gentrified hovels.