Skip to main content
My post "Tales of a Gisaeng" is almost over 1,500 pageviews versus the mere 100-200 page views for my other posts. Thus I bring you more Gisaeng poetry!

During the Chosun dynasty Korean society was strictly Confucian; marriages were most often arranged and young ladies were not permitted to go out. There is the often told tale of girls on a swing set, swinging as high as they could, just to get a view over their courtyard wall.

In this context, where women had few freedoms, even that of expression, the Gisaeng may be viewed as a 'feminist' one. Although their lives were confined to their role as concubines, serving at the pleasure of the state, they did have the education and freedom to write with their most often form of expression being the shijo poem, many of which were made into songs. It is important to note that many of these poems express both their loves and longings as well as their complicated emotions they had for their clients. Being unmarried, the Gisaeng also had great financial freedom and many were known throughout the open air markets of Chosun Dynasty Korea. 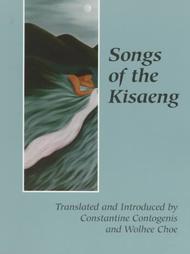 From www.abebooks.com a used bookseller conglomerate I received a copy of Songs of the Kisaeng a collection of shijo poems by various Kisaeng translated by Constantine Contogenis and Wolhee Choe.

All of the translated poems come with the original Korean so it is a great source for English speakers wishing to expand their Korean vocabulary.

Ah, What Have I Done?

Ah, What have I done -- as though I didn't
know my feelings would remain.
I would not add the few
words that would keep him.

I want to understand the joy
I felt as I was letting him go.
-- Hwang Jini.

An anchor lifts, a ship is leaving
he goes this time, when to return.
Far over the sea's vast waverings
one can see a going as return.

But as the sound of that anchor lifting,
the night could hear her insides turn.
-- Anonymous Gisaeng.

Iron, We Were Told

Iron, we were told; iron had arrived again
Sure I remember brittle pig iron,
but your close, cold surface told me iron
again that was hammered and annealed.

This time I will use a furnace of earth, bellows
of such breath you will not withstand the fire.
-- Chinok.

Overall I'd say this book is an excellent read providing much insight into the midset of the Gisaeng. There is a fine selection of poems: some love poems, some speak of longing and loss while others are of renunciation. Theirs is a poetry of passion whereas many of the poems written by the literati yangban at the time are of historical or of topical themes and tend to be rather dry overall. Perhaps this explains current interest in the emotional complexities found in Gisaeng poetry. Indeed, it is one of their more intriguing charms.