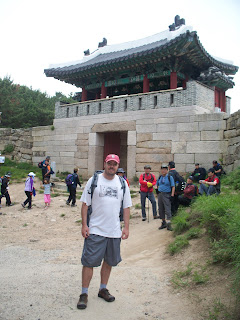 This is a pretty crummy picture but what it represents is a bit of a milestone for me. Since I had the surgery my condition has improved dramatically and Yujin and I went on a long walk with mild exertion on Saturday and a long hike with serious exertion on Sunday (up the cable car and over and down the other side and back up to Seokbulsa, the temple carved in stone) and neither time did I suffer even mild symptoms. It wasn't very hot though, which is the true test. It was great to be able to get out and do some hiking.

I have completely lost the tourist attitude and I forget sometimes to even bring my camera along. I actually took pictures at the South Gate while I was out yesterday but I was so blown away by the temple I forgot to get it out. I sat for a long time in the temple. It was so quiet and peaceful. I would like to go to that place again.

We had left my scooter at the gate of the park where the cable car goes up but after we hiked all the way down the other side of the mountain and then half way back up in another place to go to that temple we only had three hours to get all the way back up to take the cable car down again to the scooter. I know there was probably a short cut to the top from the temple but as you know nothing is marked and I couldn't risk a descent in the dark if we missed the last cable car down at 7pm and Yujin was wearing Brikenstock's which she always does but the descent to the temple was basically "bouldering" and she wore out her little toes and although my balls were fine my knees were not and I was already into the Advil.

So we walked down further from the temple (still on the wrong side of the mountain) and came to a little noodle shack at the end of the paved road up from the other side. There was a taxi parked there with nobody in it and I asked a guy sitting there where was the driver and he said he didn't know (Yujin was in the bathroom) and I sat there and here comes this guy drunk off his ass and he goes over to the taxi and tries to get in and it is locked of course and he starts kicking the door and cussing. He then tried the doors of all the other cars. I am just sitting there watching all of this.

When Yujin came out of the bathroom the guy and his wife I had been talking to said they would give us a ride but it was a delicate situation given the belligerent nature of the drunk so we hiked down the road a way and when they finished their noodles they picked us up. They dropped us off very near the scooter and it was a minimum cab ride to the pick-up. We thanked them profusely and I gave them my two hiking apples. Home and then to the Bali Sauna and Jimjilbang for a scrubbing, steam bath, and massage chair. I slept soundly.