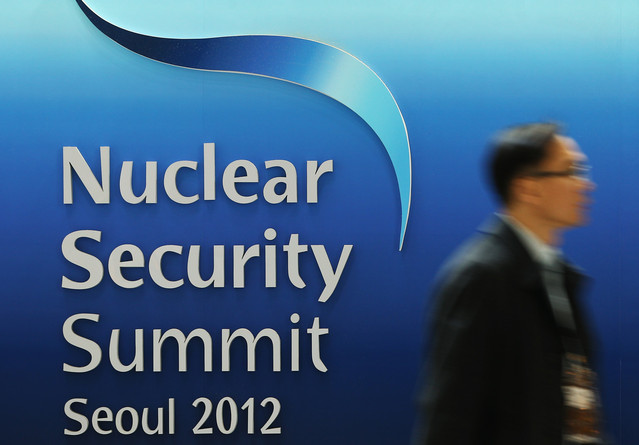 As the Nuclear Security Summit 2012 roars into action today, some might wonder what all the ado is about.  COEX, according to one friend who had to teach there this morning, was a “clusterfuck” given all the security gates, the closure of  Samseong Station, and the general heightened level of security.  The real buzz began on Sunday, March 25, when President Obama visited the DMZ for the first time and peered across the border into a rather barren North Korean landscape.  Then came his speech Monday morning at Hankuk University of Foreign Studies where he spoke of the importance of the securing nuclear dangers around the globe and “a world without nuclear weapons.”  Yet for all of the hubbub, Donald Kirk, no stranger to news in Korea since he’s been writing about it for decades, has a rather cynical and pessimistic view of the whole meeting.  Below is what he wrote for the Korea Times.

The noise generated by this week’s nuclear security summit is deafening. Everywhere you turn, you’re inundated with seminars, conferences, symposiums and just plain speeches. It’s as though everyone with an agenda, an opinion, and a claim to some level of expertise wants to get in a word.

The talking began with briefings by top-level officials ― first the one who calls himself the  “Sherpa” for the summit. Sherpa is a term the Koreans and others picked up from the Americans. The allusion is to those Nepalese guides who show mountain climbers the way up the summit of Mount Everest.

The idea is the Sherpa will lead all the climbers, the 50 or so heads of state and international agencies and deputy heads and ministers, up to the top. When they get there, they’ll look down on the world below and let fly a vague but portentous statement about the evils of nuclear war and nuclear terrorism. Then they’ll come on down again and go home in a blaze of press conferences and departure comments.

The statement will have to have been largely written before all these potentates and near-potentates and assistants and aides descend on Seoul this weekend. There’s no way they could all gather around a big table and come to terms in hours on a document bearing all their signatures. They’re not there to waste time parsing phrases and sentences. They’ve all got to make speeches decrying nuclear war and nuclear terrorism and resolving to join in combating it.

Contrary to the highest hopes of the Korean hosts, however, the nuclear summit will be of little interest worldwide. With real wars simmering in the Middle East, and a much larger war threatening to erupt over Iran’s nuclear program, news junkies outside Korea have more important issues to consider.

Protesters against anything nuke (including the NSS).

Moreover, senior officials at the foreign ministry have done all they can to guarantee the absence of news by saying the summiteers won’t really talk about nuclear proliferation or get down to cases, notably North Korea. With such provisos as those, how could the summit offer anything other than a forum for posturing?

Under those circumstances, South Korea can be thankful that North Korea has been doing its best to inject a note of immediacy and relevance to the proceedings. North Korea’s declaration of a plan to launch a satellite while celebrating the centennial of the birth of Kim Il-sung on April 15 guarantees a certain level of interest even though no one’s going to be making speeches accusing the North of anything at all.

The gnashing of teeth over naughty North Korea will all be on the sidelines, beyond the formal rhetoric. North Korea, of course, may add still more interest to the charade by denouncing the South for hosting the summit and attacking those who might question the North’s right to put a satellite into orbit.

The assorted heads of state, however, will do all possible to avoid blaming anyone for anything. How else can it be when the leaders of all these countries are here not to engage in acrimonious disagreement or debate but to demonstrate their ability to get along for the sake of mankind? At the nuclear security summit, no one wants to openly accuse the Chinese not only of coddling North Korea but of providing safe passage for North Korea to ship components and technology to Iran and other destinations, including Pakistan in the era of A.Q. Khan, “father” of Pakistan’s A-bomb.

Security staff run drills in preparation for an attack at the Summit.

It’s also safe to assume that none of the leaders, in their anxiety to act nicely to one another, will raise the issue of Iran’s nascent nuclear program or, for that matter, the nuclear programs of the eight well established members of the nuclear club ― a total that does not include the wanna be ninth member North Korea on the basis of its two underground nuclear tests.

The real significance of the nuclear summit is that it’s likely to show the inability of world leaders to get together at all. South Korea is inordinately proud to be hosting the event ― further evidence of the South’s rise as a global power. How many, however, remember the hot air exhaled at the G20 economic summit here in 2010?

Like the G20, this one may be forgotten very soon if no one is willing to address openly the most burning issues. It’s easy for the participants to dance around the problems on the spurious claim they’re meeting to talk about nuclear terrorism in the form of loose nukes falling into the hands of bad guys, not that of rogue regimes wielding the nuclear club. No need, the South Koreans have been saying, to get into specifics.

The North’s rocket/satellite plan, however, shows how impossible it is to separate nuclear terrorism from nuclear war. North Korea has already test-fired two long-range missiles, in August 1998 and again in April 2009. North Korean rhetoric still claims the missiles launched satellites. No one believes that story, any more than anyone seriously thinks the North will give up its nuclear program.

The danger is the nuclear summit, if nothing else, will offer proof positive of the inability of the world’s leaders to come up with lasting solutions to anything.

Note: There is a print link embedded within this post, please visit this post to print it.
—
About 3WM   Archives   Podcast   Headers   Funky Seoul  Submissions   Artists  YPC