Skip to main content
The Health magazines have considered KIMCHI as one of the world's healthies food.
In general,  Kimchi is spicy fermented cabbage.  It is stored in large jars, it has a strong aroma and a sour & spicy in taste. 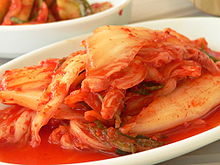 It is available in endless variety. It might take few days to adapt to the taste of Kimchi but it has several benefits  with high content of vitamin B-12 which keeps your immunity high. It has high content of Vitamin C  especially from cabbage Kimchi and  the special seasoning and kimchi has high content of Vitamin A and carotene which prevents lung cancer and breast cancer.
I think we need to re-frame the health statement in Korea.
"40 pounds of Kimchi a day, keeps the doctor away"
Kimchi has thiamine B1, riboflavin B2, calcium, and iron. It has bacteria lactobacilli which helps in better digestion. Recent studies also say that kimchi lowers the cholesterol. It helps to fight many diseases.
I love the animation created by Young Man Kang called
"Kimchi Warrior". 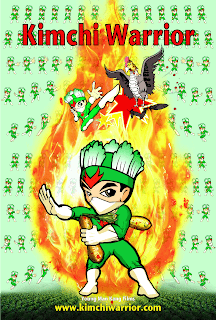 The Kimchi Warrior animation series is a unique blend of martial arts, comedy, and the promotion of good health. The Kimchi Warrior obtains supernatural strength by consuming the most prominent Korean dish, Kimchi to defend mankind from the world's most notorious diseases (i.e. The Swine Flu, Mad Cow Disease, Malaria, SARS etc.) Each episode a new "disease character" is summoned by Evil Lord of Disease to wipe out mankind. Under the tutelage of the clairvoyant Kimchi Master, the Kimchi Warrior is sent to fight and ultimately annihilate the disease with a different "ingredient weapon". It's very entertaining and educational for children. It is also advocates good nutrition to everyone, since Kimchi is deemed one of the healthiest foods in the world.
Watch the Animation   " KIMCHI WARRIOR"