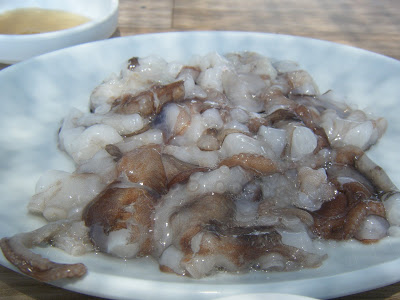 I’ve wanted to try San Nakji (live baby octopus) ever since I first heard about it, some six months before touching down in Korea. When I finally got here, I made a few attempts to search out and consume this alien delicacy, but price and scarcity defeated me too easily and I climbed up onto my laurels and rested awhile. Luckily, however, neither were an issue last weekend as a trip to Geoje Island presented the perfect opportunity to get my gums moving.

Geoje lies about three hours west of Busan in Gyeongsangnam-do province. It is a popular tourist destination in the summer months, when both population and prices swell like a pigs head that’s been in the water too long (something we encountered there on a previous trip.) May, however, is a great time to visit so we spent the weekend in a sea view pension on Wayheon beach with my visiting aunt and uncle, Joan and Eric, and my cousin Steve and his girlfriend Vicky. 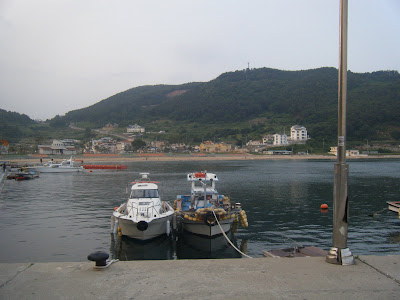 As usual food was never far from the centre of things, with highlights including an extensive Saturday night terrace barbecue capped with a bottle of beautifully smoky Bowmore Single Malt sent over by my parents. Things started to get really interesting however on Sunday, when on returning from a boat trip to a nearby island we happened upon a pier-side tent selling fresh sea slugs, sea squirts and live octopus.

Vicky and I wasted no time ordering a portion of each (20,000 won in total) and were soon cheek to tentacle with a plate of wriggling baby octopus and another of sea slug and sea squirt. Naturally, I went for the octopus first, managing with some difficulty to pry it off the plate with my chopsticks (apparently it didn’t want to leave,) before dipping it in sesame oil and salt and popping it into my mouth. The first mouthful was strictly damage control, as I chewed ferociously to prevent the suckers from sticking to my throat on the way down and choking me (on average six people in Korea die each year in precisely this manner.) After Vicky assured me it was too small to be a serious choking hazard, however, I got stuck in more heartily and began to understand why this delicacy is so popular. 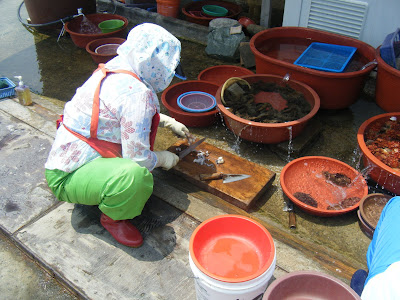 Texture-wise, it felt at first a little like I was eating a wriggly stick of jelly. As I chomped down this soft outer layer gave way to a surprising dense inner core, giving it a strange but satisfying chewiness. As for the taste, the dominant favour to start with was that of the salt and sesame oil or spicy pepper dipping sauce, but this too soon gave way to a deeper, more pervading bottom-of-the-sea freshness. This sensation stayed in my mouth long after I finished up and left the island, and remained in shades even after a (second) lunch of Daeji Bulgogi (spicy marinated pork) on the way back to Busan

After battling the Nakji I next turned my attentions to the much more colourful plate of sea snail and sea squirt. The snail, for its part, seemed to consist of mostly shell and cartilage but nevertheless delivered a strong sea punch. As for the sea squirt, it proved to be much softer than the snail, breaking down easily in my mouth and leaving a slightly bitter aftertaste (nothing a shot of soju wouldn’t take care of!) Both tasted good dipped in either the spicy pepper sauce or the sesame oil and salt, but it was the still moving Nakji that I returned to time and again. 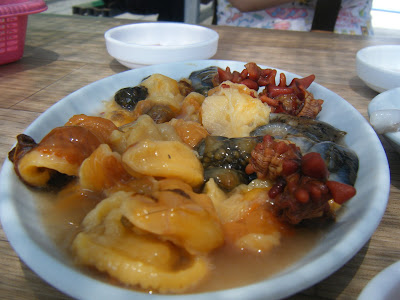 Mid-way through my meal the captain of one of the nearby vessels came over, and by grinning widely and grabbing his crotch tried to impress on me the “stamina” giving properties of Nakji before he was shooed off by the attending ajumma. I’m not sure how true this is, but I do know the San Nakji was much better than I’d expected and provided me with one of the most memorable eating experiences of my life. 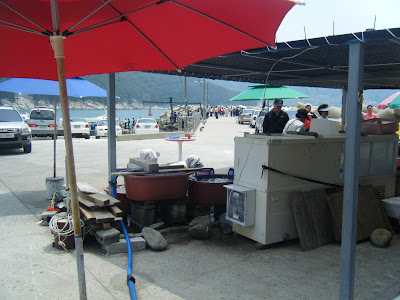