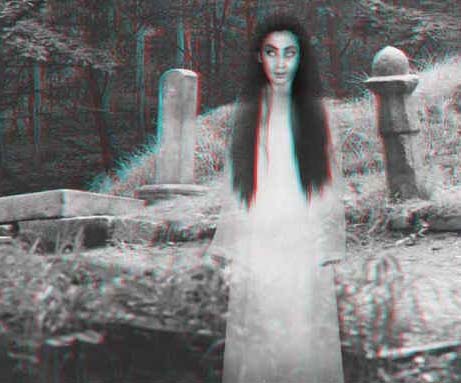 You’ve probably seen some picture of  that most iconic Korean ghost story character: the young girl with long, straight, black hair—which often conceals her porcelain white face—who pops out to torture and kill the living.  What you probably don’t know is that she was an actual girl, known as Arang, who is at the center of a true ghost story from the mid-1500s in the town of Miryang near Busan.

The daughter of Miryang’s governor, Yun Jeongok (her nickname was Arang) was a young virgin teen who had a nanny.  One day, a man who was smitten with her bribed the nanny to bring the girl out on a full moon night to a place where he could approach her.  When they got to the spot, the man jumped on the girl and attempted to rape her.  Arang fought back against the man and, as a result, was killed during the attempted rape.  The man then buried her body in a bamboo forest.

After discovering that she was missing, the father tried to find her to no avail.  At the same time, a rumor began to spread that she had left town with a young man (a shameful act).  Her father, overcome with grief, abandoned his position as governor and left the region.

Not long after, her father was replaced. But the man who replaced him was murdered and each man after him was murdered.  Finally, a young man took the position with the interest of solving the series of deaths.  One night, Arang appeared and the man asked her what had happened.  She explained how she’d died and where her body was. The young governor listened, promised to give her a proper burial and to establish a shrine for her (that shrine is still in Miryang today). She also said she would appear as a butterfly sometime during the daytime and fly around the head of the man who’d murdered her. After her bod 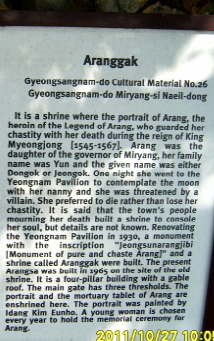 y was found, proper funeral rights were given and the man who murdered her was identified and punished.

The shrine called Arangsa stands on the site of the old Arangjak (the original site) and every year a ceremony is held to commemorate Arang’s fight to maintain her virginity against a rapist.

The story has been taken to mean that those who don’t or can’t punish the criminals in society should also be punished. Moreover preserving your chastity is the most honorable of acts.  The ghost is called virgin ghost or cheonyeo gwishin (처녀귀신) and can represent almost any troubled spirit nowadays.

This leads me on to a story that was passed on to 3WM:

This happened while my family and I were getting ready to leave Korea for America during the 1997-98 Financial Crisis.

One night while I was studying in my room, I felt very tired and couldn’t continue studying. Thinking that some rest would help, I turned in for the night.

I was so tired that I thought I’d fall asleep the instant I crashed into bed but, oddly, I became very restless and felt a little sick to my stomach. Thinking that I had maybe caught something I turned off all the lights and the small TV and tried to sleep.

Lying there in the dark didn’t do a thing to help me go to sleep. I started feeling cold and scared for some reason like you might walking alone down a dark, barren road. Then, from a distance, I heard a girl crying, a muffled sort of sobbing. I was chilled to the bone. I didn’t want to move and my eyes were wide open. The crying seemed to continue for about three to five minutes, though I had no idea of time. Too scared to move or say anything, I just listened to the crying—I was in that kind of frozen state that you have in dreams when you can’t move (but I wasn’t asleep). Suddenly, the crying ended with a shrieking scream.

Now the only way I could explain the scream is kind of strange–it was loud enough for me to hear it but it seemed to fade quickly away rather than carry. Then came the truly chilling part. But first let me explain the setup of my room a little bit. The small TV used to sit on a stand at the end of my bed on top of a VCR. There was some space in between for walking so I could get to my clothes rack. As I laid there frozen by fear, I stared straight forward, wide-eyed. I 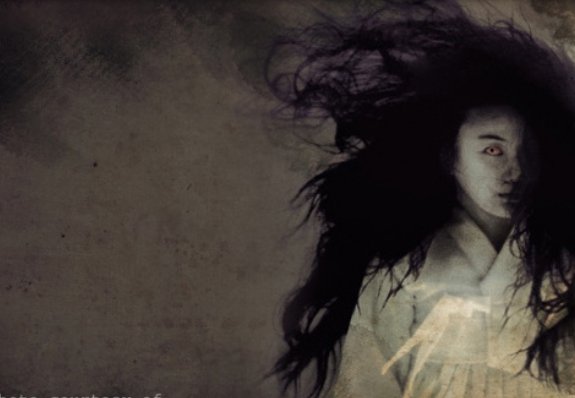 All I could see was the 12:00 on my VCR blinking because I never set the time for it. Then, all of a sudden, a few seconds after I heard the scream, the 12:00 that I was looking at disappeared. The only thing that registered in my mind was either the VCR was broken or someone/something was standing in front of it. I couldn’t really see anything because it was dark in my room but the 12:00 had disappeared. Maybe it was my mind playing tricks but I thought I saw the outline of a girl (at least the head and hair, kind of like the young female Korean ghost that any Korean knows).  I thought my heart was going to explode.  I shut my eyes and started praying. When I opened my eyes, there was the 12:00 blinking like normal and there wasn’t any silhouette.  I still didn’t want to move.

I stayed up all night, too scared to sleep. When first light came, I thanked God. Then I got up and started looking around. I found no evidence of anything being in my room or malfunctions of the VCR connections (I even banged the VCR a few times to see if it had a problem). After only living in that first floor apartment for about a month, my family decided to move to America. We were having a lot of money problems and wanted to come to the land of opportunity to see where it could take us. Not until we had moved out did my mom tell me that she hated the apartment and got bad feelings from it. 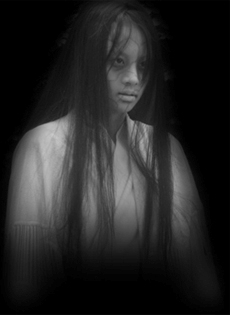 I then told my mom what happened that night. She didn’t act very shocked and proceeded to tell me that the only reason they got that apartment was because of the price. My parents knew that we were moving to America months prior and just needed a cheap place to stay for about a month. The apartment was dirt cheap because a high school girl who had lived in an apartment way above us had committed suicide after failing to get into her college of choice. She had landed not far outside my bedroom window.  My mom told me that other residents in the building had said they had seen a girl’s face in the elevator mirror and that kids were afraid to ride it.  Whether or not any of this was true, whatever happened that night in my room still gives me the chills and still has me leaving on a light at night more than 10 years later.