Having fairly conservative-minded Korean in-laws can be extremely frustrating, but I do sometimes forget the tremendous privilege it is to have a Korean side to my family.  It is an cultural experience every time I go and see them and gives me a great insight into a very traditional and rural Korean psyche.  On top of this, they really are genuine people and very kind to me.  I often feel very guilty about the amount of complaining I do.  Our differences cause a fair amount of problems, but their cause is nobody's fault, we just have ingrained cultural issues with one another that are not easily fixed.

A couple of weeks ago, I visited my in-laws at their house in rural Jeollanamdo at a place called Woldeung, about half an hours' drive from Suncheon and about an hour from Gwangju.  Woldeung is a small village famous for peaches and is pretty in spring when the peach blossom on the trees comes out in full bloom.  It had been about a month since I had previously visited them there and was amazed by the amount of hard work they had put into the place.  They had created a place to live and an atmosphere straight out of a textbook example of what you would expect rural Korean life to be.

They bought the house in the Winter, after having lived in modest accommodation in the city of Suncheon for the past few years.  Before moving into it, however, it needed extensive work done, indeed this was the plan as my father in-law is a builder.  Koreans have a reputation of putting in all the hours god sends and my father in-law was no exception when working on the house.  Between working for his building company, he would literally work the whole day and night fixing the house and often without eating.  In a couple of months, his usually thick-set look faded into a much slimmer looking older man.

The following pictures were taken in the winter, at this time my father in law had still done quite a lot of work on the place, it must have been a real mess before he started. 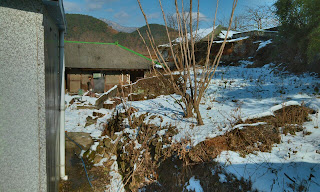 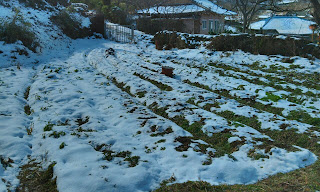 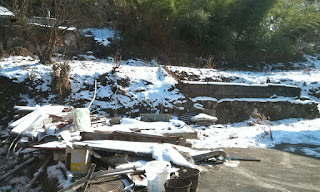 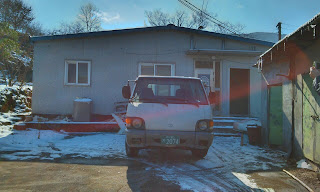 In those few months over winter and early spring he made the place livable, but between May and June, my in-laws had really transformed the house into a home.  They had built an extension onto their main living area and completely renovated their old traditional-style Korean house also.  In the area where I had helped them shift a number of large rocks, they used them to create a terrace for pots of kimchi, bean paste, and chili paste.  The back garden, which was a desolate, unkempt, and rocky wasteland only a couple of months ago, had been converted into a highly productive vegetable garden where, they they were successfully growing pumpkins, cucumbers, tomatoes, hot and cool chilies, peppers, ginger, lettuce, watermelon, and many more.  When I showed-up on memorial day, my father in-law was watering them all in his very Korean-looking straw sun hat.  I was seriously impressed.

These are the most recent pictures, although there is still work that my father in-law is planning.  The pictures obviously look better because of the change of seasons but it is also down to a heck of a lot of work: 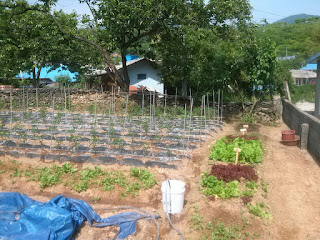 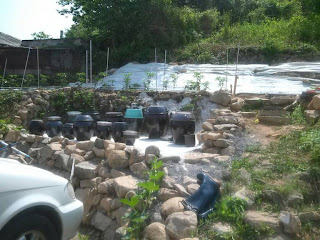 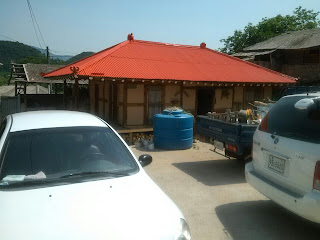 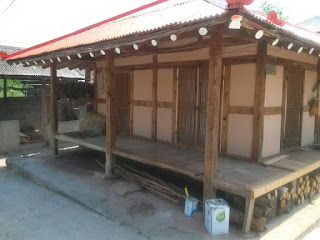 After helping my father-law with collecting sand from a near-by pit to use for concrete on a later project, I was treated to lunch.  It was my birthday the following weekend, so they decided to treat me to lunch with some Korean food they knew I quite liked.  On the way to their place we picked-up some octopus and abalone, which they had already paid for.  Although being for many years a vegetarian, they know I am quite fond of seafood and proceeded to cook up a special lunch for me.
If there is one thing I can do with regard to blending into Korean culture and making Korean people happy, I have found it is that I can quite happily devour all of the food they cook for me.  To be a vegetarian in Korea would be a significant disadvantage to me, as the joy on my in-law's (as well as other Koreans I know) faces when I eat their food is a sight to behold and most Koreans are not especially keen on the idea of not eating meat and seafood.

As an appetiser, my father in-law cut up the still very much alive octopus for some san nak-ji - for those of you that don't know this is octopus tentacles that aren't cooked and moving on the plate, served with seasame oil and salt (it's actually not bad).  After this, my father in-law continued to be chef, cooking-up a spicy and delicious mixture of chicken, octopus, abalone, and the vegetables they hand-picked from their garden in the morning.  I was being treated like a king and it was quite clear that they were quite happy in doing so, not only because it was my birthday, but because I had helped them a little and - most importantly, one feels - that their daughter and I were visiting them, full stop.

This may sound a weird or even slightly horrible thing to say, but this sheer unadulterated joy at seeing us is usually something that makes me exquisitely uncomfortable.  I usually don't feel like I have earned it and I can't possibly return the sentiment or convincingly 'fake it' that I feel the same way.  I am actually far more comfortable if I have spent half the day moving rocks, sand, or furniture for them because I have at least some feeling that I have deserved to be treated well.  On top of this, every time I plan to be at my in-laws for a few hours, it turns into a whole day marathon as their enthusiasm for seeing us makes them hold on to us for dear life for as long as they can.  This creates a vicious circle of me not wanting to go round there very often and in turn makes them hold on to my wife and I more once I actually go round there.

Still, the whole day was a total experience of Korean culture; wriggling octopus, a Korean old man wearing a big pointy straw sun hat, spicy food, kimchi pots, doting parents, a traditional Korean house, a sleepy Korean village, and fresh Korean home-grown produce.  Perhaps there are people who come to Korea and pay for the privilege of experiencing true Korean culture like this and never get anywhere near as close as what I live through on an almost weekly basis.  I complain, but I do at least have some understanding of how lucky I actually am to be able to experience it all.  I think it has had a great effect on me as a person and has given me an interesting perspective on life that many others could not have even imagined.

If only I could express the genuine contrasting feelings I have about my in-laws to them.  The culture difference prevents me from doing this; on the one hand I have tremendous amounts of frustration and discomfort, whilst at the same time being truly humble and appreciative of all they have done for me, the care they show, and the experiences we have shared together.

yeah. I share the privilege. And while the old folks make me crazy sometimes, it's simply because I ain't a country boy, and definitely not interested in spending my free time working the farm.... I would probably feel much the same if my wife's folks were from desolate Oklahoma or Arkansas or someplace like that. Mother-in-law is a rough Gyeongsang Halmoni, but she does care, even if her language never quite sounds that way... However, I live 100 meters from them, so see them several times each week, usually. They do watch over my little girl, for which I'm very grateful. I just wish they would give up the farm fields, as they are too old to work them meaningfully, and it means their children and spouses have to give up weekends for that.

It ceratinly is an experience isn't it?  I think all the problems with my Korean family are cultural, as my in-laws are not really country folk, but small city folk.  They are basically fairly typical conservative Koreans and I am quite a liberal and principled Englishman, this doesn't always mix well.

Fair play to you living 100 metres from them, I think I would go crazy in that situation.

In six weeks I am finally going to be living away from my in-laws! My mother in-law helped us by watching the kids while my wife and I worked but she didn't do a great job, leaving them in the house alone and never picking them up unless a bus dropped them at the gate.  They were ok to live with but the lack of privacy and forking out for stuff and loaning money out all the time got wearing.