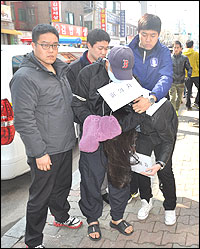 The frightening, alarming and baffling story of a woman in the city of Suwon, south of Seoul, who phoned the police at 10:58 p.m on Sunday, April 1 to report that she had been abducted by an unknown man, taken to his home and feared that she was about to be raped or worse continues to snowball with National Police Agency Commissioner Cho Hyun-oh offering his resignation in shame over the botched police work that led to her death. President Lee Myung-bak accepted the resignation Monday.

According to developing reports, the man, Wu Yuanchun, 42, an ethnic Korean from China, was on his way home from a store when the 28-year-old woman bumped into him. He responded by threatening her life and forcing her back to his home where he intended to rape her. Reports say that when he entered the bathroom, the woman locked the door of the room she was in and called the police number, 112. Initially, according to the Gyeonggi Provincial Police Agency–and this article in the JoongAng Daily–the call only lasted a minute and 50 seconds during which the woman provided information about her location and, reportedly, allowed for GPS tracking. Yet the police did not locate the scene until 13 hours later at which time they found Wu cutting the woman’s body into pieces. One report cites the mortician:

“A forensic expert who conducted an autopsy on the woman described the condition of her body as ‘too horrific for words.’ The National Forensic Service received 14 plastic bags filled with altogether 280 body parts. ‘He butchered her,’ the official added.”

Not long after the original claim by police that the call was less than two minutes, it was discovered that it actually lasted seven minutes and 36 seconds during which the man is attempting to rape the woman. The full content of the call has been released (the above JoongAng link has the shortened transcript the police originally provided; here is the full transcript in Korean). Eventually Wu broke down the door to the room and attempted to rape the young woman but according to his statements to police, he failed to rape the woman do to her resistance. And, after several failed attempts, he killed her at 5 a.m. the following morning, striking her in the head with a wrench and then strangling her. 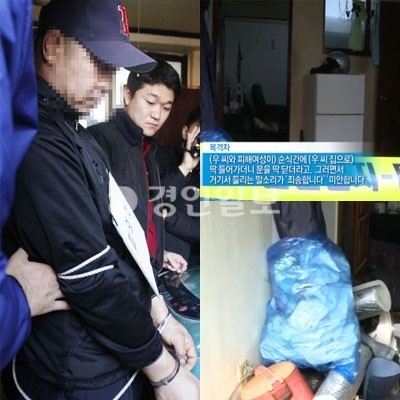 The suspect reenacts his crime and pictures of the apartment and bag he used to dispose of the victim.

Public fury over the police’s mishandling of the case has reached a boiling point as, according to some Korean media reports, the police’s claim that they scoured the area searching for the location is now being refuted by local residents. In the intial JoongAng report it states:

“They [the police] explained that they failed to find her because they were not able to go into every house located near the crime scene and the GPS device is imprecise. The police said they searched all the streets within 500 meters (1,640 feet) of the house by dispatching 35 officers but failed to find the victim in time.”

Locals say they never saw any of the 35 officers supposedly dispatched to find the woman.

The police also face the CSI effect which has the public expecting that GPS tracking should allow them to pinpoint the location of a phone and arrive within minutes. To be fair, that is not exactly realistic. And, according to one officer, it was impossible to get warrants to search every house in the area: “We were not able to search every single house without a warrant,” a spokesman of the Suwon police said. One has to wonder how residents would have reacted to the police knocking on doors and demanding entry without a warrant.

Nevertheless, the case will not comfort the public nor bring much confindence in the nation’s “finest.” The recent arrest of a murder and rape suspect in Seoul uncovered scores of watches, mostly women’s, and 10 necklaces. The police are now investingating to see if those items are keepsakes he stole from his victims.

In the meantime, police report that Wu has a wife and children in China, came to Korea in 2007 and has worked at construction sites, making some 1.5 to 2 million won a month. Allegedly, Wu was living in Korea illegally.