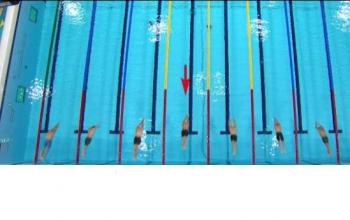 LONDON, July 28 (Yonhap) -- The false start disqualification ruling on South Korean swimmer Park Tae-hwan was overturned hours after it was issued Saturday at the London Olympics, officials said, in a move that clears the path for the reigning Olympic champion to win his second straight gold in the men's 400-meter freestyle swimming.   Earlier Saturday at London's Aquatics Centre, Park appeared to have crashed out of the competition after it was determined that he had moved slightly in his 'take your marks' position on the platform before his heat race. But South Korean swimming officials said FINA, the global governing body of the sport, overturned the decision upon video review of Park's start, after at first rejecting South Korea's appeal.   Park completed the swim and finished in 3 minutes and 46.68 seconds, the fastest time among all swimmers up to that point with one heat remaining. Sun Yang of China, considered Park's main rival, topped the field in heats at 3:45.07.   With the turnabout, Park enters the final with the fourth-fastest time among eight qualifiers. The move also knocked out Ryan Cochrane of Canada, who had been the eighth and the final qualifier.   Park, known for quick starts, had the fastest reaction time in his heat at 0.63 seconds. After the race, the 22-year-old Park didn't intially seem bothered by the abrupt decision.   "I don't know why I got disqualified. I have to ask around," he said. "I don't know what the problem is."
Read the rest at: http://english.yonhapnews.co.kr/culturesports/2012/07/28/90/0702000000AEN20120728003000315F.HTML

Update:  from Yonhap
By Yoo Jee-hoLONDON, July 28 (Yonhap) -- Park Tae-hwan won the silver medal in 400-meter freestyle swimming at the London Olympics on Saturday, hours after an earlier false start disqualification ruling was overturned by officials.   At London's Aquatics Centre, Park clocked in at 3 minutes and 42.06 seconds to finish behind Sun Yang of China, who established an Olympic record with 3:40.14. Peter Vanderkaay of the U.S. won the bronze at 3:44.69.   Park failed in his attempt to win his second straight Olympic gold in 400ｍ free and also came up short in his bid to become the first South Korean to defend an Olympic gold in an individual event.   But Park almost never had a chance to swim in the final. He was initially disqualified for a false start after recording the fastest time in his heat earlier Saturday. South Korean officials appealed the ruling and the global governing body, FINA, overturned the decision after further video review.

Good news to wake up to.  I didn't see any early motion on BTH's part in the replay and had trouble explaining it to my son.

I would like to see the olympics with no national flags after they win. Give them the medals but no flags and anthem. Too much nationalism.  We all know what happened when Anto Ohno won the Gold over a Korean.  And after some judges negative ruling in last olympics a Korean made a bomb threat at that countries embassy in Seoul.

Yesterday I was watching a Judo match between a Korean and a Japanese . The Korean won 3-0 but it was somehow overruled and the Japanese won . I dont know why ? I am no a Judo expert . The announcers started crying about the 2006 World Cup match between Korea and Swiss. Swiss won 2-0. The Koreans did not  like some offsides penalty but wake up you lost 2-0. You lost because you played poorly and had no sniff of a goal. Its like comparing apples and oranges not the same. The judo player perhaps got robbed but the Korean soccer team just got schooled my a better, more talented, and skillful swiss side. I do not see how that world cup match has anything to do with what happened to the Judo player /

The Olympics is full of strange rulings by judges.

In the 1988 Summer Games in Seoul  In a boxing match Ovander Holyfield had beaten his Korean opponent to a bloody pulp, He could barely stand . Somehow the Korean won the decision. It was pure robbery in many viewpoints .

IN the 1972 games in Germany in the Basketball final USA  vs Russia for the Gold. THe horn sounded the USA won but  the refs said there was a timeout was called that the Russians didnt have.  So they played again last   play  horn sounded USA won. Then without any reason refs told them play last play again. This time the russian pushed the american and made the basket. The Americans refused the silver. This has to be the biggest robbery in sports history.