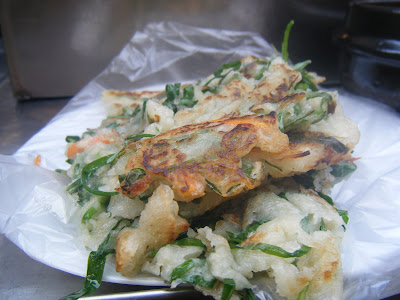 I have wanted to write about pajeon, the Korean seafood pancake, ever since I started this blog. It was one of the first street foods I ever tried in Korea and since then I’ve eaten it in a countless number of bars, restaurants and tents throughout the city. It’s hands down my favorite Korean food and when someone doesn’t like it, I can’t help but take it a little personally, such is my relationship with the stuff.

Although the best pajeon (the ones walking the crispy tightrope and loaded with prawns and octopus) are usually found in places with four walls and a roof, I can’t help but retain an affection for the street variety. It’s quick, cheap and delicious, and in my mind the best place to get it is in Nampodong, an old port area home to several markets (including Jagalchi Fish Market) and what’s soon to be one of the tallest buildings in the world (if it’s ever completed that is.) 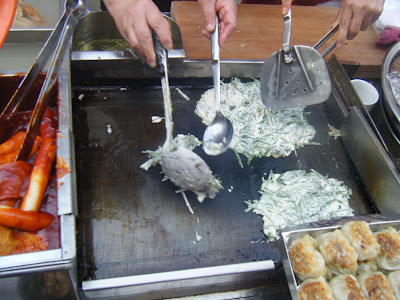 On a recent visit to Nampo I went to one of my regular pajeon haunts and ordered myself one of the usuals. Some places stack’em high and wait for the orders to roll in but these ones were being cooked to order, and a slightly worryingly short time my paejon was ready and good to go.

My doubts about the cooking time proved to be unfounded, as I found the paejon to have a very agreeable consistency; golden on the outside yet soft and doughy in the middle. It was also riddled with super-thin spring onions punctured by an occasional flash of carrot and red chili, giving it a good onion-y taste with a bit of occasionally spiciness. The most surprising thing about pajeon however was the lack of any octopus. Pajeon usually abounds in the chewy tender stuff but this one was completely without, though I have to say managed nevertheless to hold its own in its absence. 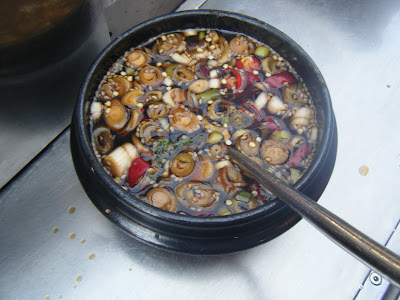 Complimenting the pajeon was a bowl of deep, dark, delish soy sauce spiked with chilis onions and sesame seeds. I literally couldn’t get enough of it and found myself drowning my pajeon in it. The friendly lady next to me also took the liberty of dribbling a little dukbokki sauce on my plate from a nearby vat, which though agreeable enough, reminded me too much of dukbokki to ever really be a contender.