Skip to main content
I’ve never been too enamoured with Takoyaki. The first time I tried these Japanese octopus balls was at a buffet and they had been lukewarm, soggy and thoroughly unremarkable. Later, when I tried the Takoyaki van close to our school I was similarly unimpressed with the results. I’d waited 20 minutes in line and had spent most of that time in a state of nervous suspicion that the Korean lady behind/next to me was in the process of bunking the queue. When I finally got my Takoyaki the results weren’t great. It was limp, almost devoid of octopus and drenched in that weird Korean mustard so beloved of toast stands throughout the city. 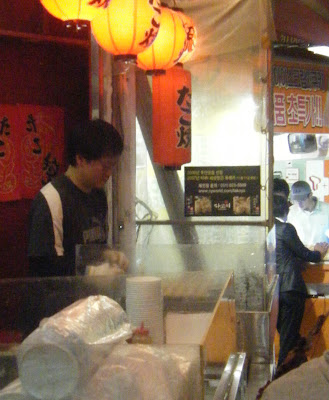 As such it was something of a last chance saloon when I sampled the Takoyaki in PNU (Pusan National University.) I’d passed one place many times and had always been impressed by the long lines of people waiting, so despite having a date with a pan of sizzling red hot pan of dak galbi in less than an hour, I joined the back of the queue and tried (again) to find out what all the fuss was about.

Takoyaki are cooked in a special cast iron hotplate studded with dimples a little smaller than golf balls. The chef must keep them constantly turning with a pair of toothpicks to stop the batter from burning, something that requires incredible speed and dexterity. Post – hotplate, the balls are dusted with Katsuobushi (thinly-shaved smoked dried tuna that gives a powerful punch to anything it comes into contact with,) and topped with a spicy chilli sauce and another sauce quite similar to mayonnaise. 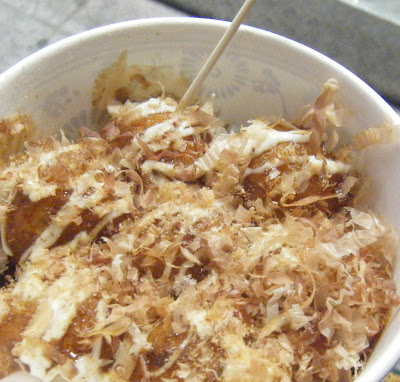 It’s advisable to wait a few minutes after cooking before impaling your first Takoyaki and popping it in your mouth. I didn’t, with the result that I thoroughly scolded my mouth and spent the next few minutes flapping about trying to ventilate my burning word hole. The next Takoyaki was more successful however, and I found out just why this particular vendor is so popular.

Although firm on the outside, the batter inside the ball isn’t, flooding your mouth with a warm liquid the consistency of a good mornay sauce the second you bite into it. Delve deeper, and you are rewarded with a tender piece of octopus, perfectly cooked and slightly chewy. Meanwhile the chilli sauce (not unlike that found in British kebab shops) lends the arrangement a bit of a kick, while the Katsuobushi imparts a lingering, full mouth smokiness you can feel in your nostrils.