Skip to main content
A few weeks ago, I discovered The Wire. From then on, until I ran out of episodes, time that would have otherwise been spent reading, updating this blog, or writing elsewhere, was spent glued to the computer screen watching episodes, analyzing them, and reading reviews. It was a very sad period for my social life, but an enlightening experience as a TV fangirl. Not that anybody asked, but Season 4 of The Wire is the best season of television that I've ever seen, and while I'm at a loss of what the Hell to do with myself now that I've run out of episodes, I can't bring myself to start on another show just yet.
(How exactly somebody who claims to be a TV dweeb went this long without watching The Wire is beyond explanation. I'm a bit of a farce.)
In between episodes of The Wire, life has just sort of happened. The eclipse came and went, though the combination of cloudy skies in Seomyeon and my digital camera of questionable quality resulted in poor evidence of this. I've lifted the following photo from my friend Melisa, who had a better view in Minam (my old stomping ground). Also, probably better photography skills. 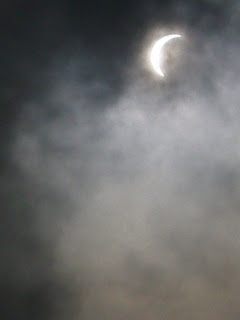 I tried to blame it on the camera, but compared and found that our cameras are of similar quality. I now suspect that my camera is faulty, and thus, still largely responsible.

My failure to notice when the eclipse was actually happening may also have played a role.