Skip to main content
I recently posted about Soondae, the Korean blood sausage that is a staple of street food stalls right across the country. Then I found it to be a good addition to the genre and definitely worth trying, but a little too jelly-like in consistency to have me running back for more.

I thought that was it for soondae, until that is I discovered these boys selling out the back of a van by our apartment. 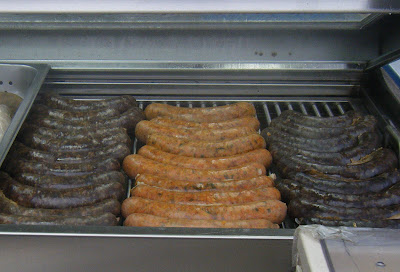 I’d never actually heard of Kimchi Soondae, and half hoped that this was a meatier sausage more like the ones we’re used to in the old country (despite being a nation of pork lovers, Korea is notoriously bad in the sausage stakes.) 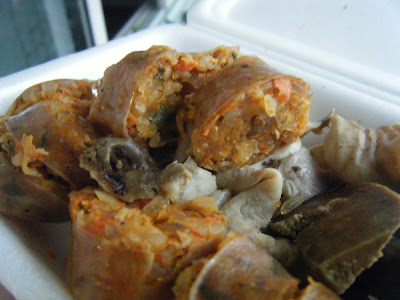 When I knuckled down to eat some the stuff however I found it to be a different story altogether. Kimchi Soondae has a firmer texture than the black stuff, due no doubt to having a lot less glass noodles packing it out than the original. They also seem to have thrown some onions in, mixing it up a little consistency-wise and making it resemble uncooked chorizo. This for me, made it a little more palatable.

As for the kimchi component, I found it gave a good spiciness to the sausage without being too in your face, though I did expect a better showing from the garlic (I guess it was busy stinking out the subway somewhere else instead.) I also found the small intestine casing to be a little bit too true to its original form for my tastes, but I’m going to fry it up next time to see how it goes.

As before the soondae came with a bunch of tripe and other bits, of which the steamed liver particularly stood out and to my mind was worth the 3000 won on its own. I’ve never seen it anywhere else and would love to investigate it further.

All in all it was a pretty good tray of body parts, and coming on the same day as a particularly bad pork experience, managed to almost erase the trauma from my mind.

And I reckon I’ll go back for more.