Skip to main content
1. National
1) Korea and Japan difficult over Mr. Abe and bullets
The relationship between Korea and Japan is getting sour over two issues. The first one is the controversial Yasukuni Shrine visit by Japanese PM Shinzo Abe, which has drawn criticism from the U.S. and China, as well as both South Korea and North Korea. Even more Japanese have negative views on Abe’s visit to Yasukuni that holds 14 of Japan’s Class-A war criminals. The other is over the borrowing of 10,000 bullets from Japan’s Self-Defense Forces by the South Korean Hanbit Unit in South Sudan when there was a big battle in Bor last week. The Japanese government is using the case to bolster its right of “collective self-defense” as the 10,000 bullets to Hanbit Unit was Japan’s first ammunition to another country since World War II.

There are 284 Korean soldiers in Hanbit Unit whose assignment is to build infrastructure and to provide medical service, and my first son is one of the 284. The opposition party is criticizing the commander of Hanbit Unit for creating a diplomatic issue by borrowing bullets from the Japanese forces. That is non sense. If I am at a battle, and if my soldiers are at a risk because of lack of bullets, I would send S.O.S. for more bullets even to the enemy.

2) Kim Jong-un warns of sudden war
North Korean leader Kim Jong-un warned that war could break out “without any prior notice” while inspecting a military post, urging the soldiers to improve combat readiness. Kim was accompanied by a new troika who appear to be propping up his power after the execution of his uncle Jang Song-taik. 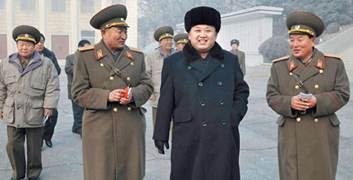 Rumors have it that Jang was executed because he had an affair with Kim’s own wife or Jang had attempted a coup to overthrow Kim, or Jang stole money out of Kim’s pocket. Whatever the truth, Kim was angry enough to spray his uncle with anti aircraft guns and then burn the remaining body with flame-thrower. Kim was a good diplomat, though. He was cautious enough not to borrow bullets from Japan.

2. Economy
1) Korean railway under strike
The workers in KORAIL, the national railway, have been in strike from Dec 9, demanding the government scrap its plan to set up a new rail operator for the new bullet train line linking Gangnam to Busan, calling it the first step to toward privatizing the KORAIL. The government is responding that it is not “privatization,” but “normalization through competition.” The KORAIL employees are paid the best in the world, even more than those in the U.S. or Germany, while KORAIL is suffering under 17 trillion Won debt. The railway is running only 70%, but the strike is to end soon as KORAIL and the union is on a single track, running at max speed to each other at the moment.

Though railroad was first built in 1899 in Korea, between Seoul and Incheon, Choi Yeon-hye is the first female head of Korean railway.  She is using the same rhetoric as Ronald Reagan had with the striking U.S. air-traffic controls in 1981. “Come back to work by Dec 28 or face the consequences.” The Dec 28 has passed, and KORAIL did begin to hire new employees to replace the strikers. All the male heads of KORAIL before Choi had no balls to make the organization straight. Choi has no balls for sure, but it seems she has guts instead.

2) Supreme court rules on ordinary wage issue
A big labor issue for the past two years was whether the fixed bonus is to be counted as the ordinary wage that is the basis of over time payment. The Supreme Court ruled on Dec 18 over the law suit filed by the union of an auto supplier Kabul Auto Tech that the fixed bonus be included in the ordinary wage, which is a victory for the union, but held back from forcing the company to pay three years’ worth retroactive pay, a good news for the company, under “principle of good faith and trust.” In short, the court said ‘change from now on, but leave the past alone.’ The labor department in the government announced it respects the court decision, and there will be big changes in the labor law within a few months.

Outgoing GM Chairman Dan Ackerson complained to president Park Geun-hye last April to do something about the ordinary wage issue that may cause billions of dollars for GM Korea. With the latest decision from the court, Mr. Ackerson got only half of what he wanted. Mary Barra, the first GM CEO without balls in its 105 year history from January, will probably do better than any of her predecessors with all the guts she has to break the 105 inch thick glass ceiling.

3. Auto Industry
1) Hyundai becomes a legend with 1 million cars in China
Hyundai Beijing has sold over 1 million cars in China this year, 11 years after it began production at its joint venture plant with Beijing Automotive Group, becoming the fastest automaker to reach that milestone in China. Hyundai’s sales target for this year was 970K units. Hyundai plans to maker more vehicles in China, with the grand opening of new commercial vehicle plant with annual capacity of 150K planned in mid 2014 that will add another 150K. Hyundai’s sister Kia will make some 500K in China this year.

Mr.Jae-man Noh had been the plant manager of Hyundai Beijing from the start-up until two years ago. Ex-quality manager at Hyundai’s Bromont plant in Quebec, Mr. Noh has been credited with expanding the Chinese market from ground zero with his “Qualite en tete, or Quality in mind” approach. Mr. Noh being a friend of mine from Bromont, I once asked him if Beijing Hyundai would be better had I worked under him in Beijing instead of leaving Hyundai. His answer was ‘Noh.’