Skip to main content
South Korea has fallen into unprecedented power vacuum as President Park Geun-hye had to make an apology on Oct 25 over the involvement of Choi Soon Sil, Park's personal friend of 40 years, in state affairs. Park’s apology came right after a media report that Choi has received drafts of presidential speeches and sometimes edited them, which was backed by confidential document files on Choi's tablet computer. Park admitted she sought help from Choi for her speeches during presidential elections in 2012, and continued do so even after she became the president. Choi is also at the epicenter of a corruption scandal in which Choi used her connection with the president to solicit 77.4 billion Korean won (U$69M) from Korea’s 62 large corporations for her cultural and a sports foundations. Despite Park's firing of 10 of her close aides involved in the scandal, and arrest of Choi over the weekend, the public is still very much outraged, suspecting Choi has been the real president of Korea and Park was only Choi's puppet. Political chaos seems unavoidable as Park still has 16 months to run the nation until Feb 2018 with both of her legs cut off. 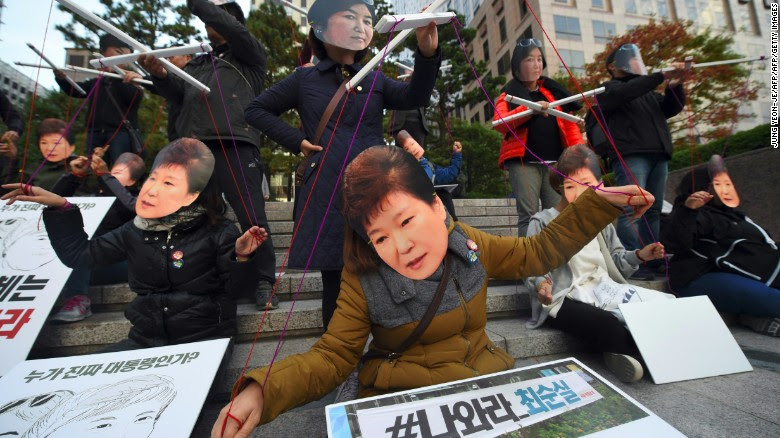 South Korea and the U.S. have been a blood ally for many years, sharing glory and pain together in good or bad times. It was manifested once again as the soon-to-be U.S. President Hillary Clinton, feeling sorry for ally nation's president's agony over document files in an aide's computer, has done her share with her e-mails to Huma Abedin's computer.