Skip to main content
Author's note: Life in Korea posts are aimed at the newer expats here in Korea. If you're one of my wonderful veteran expat readers, consider this the Idiot's Guide to Korea - useful information to some, while a review to others. Anything to add? Comment away. 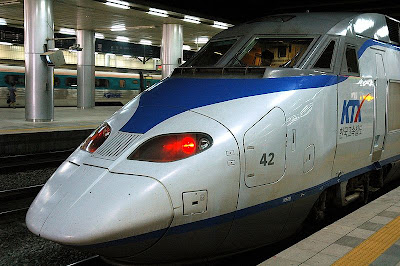 Taking the train across Korea is quite the luxury, it seems. While not every train station appears to have been created in the year 2020, most of the trains will more than adequately transport you from one part of the country to another for a lot less than you think. If you hail from most points of Europe, your first thought might border on the 'big deal - Korea's got trains, so what?'. To most Americans (and presumably other nationalities), the concept of a train system that is clean, comfortable, reasonably priced, and gets you almost anywhere you want to explore is enough to make Korea a home for longer than you expected. Although getting around is easier than you think, there are a few tricks to making the most of your trip. Getting there is half the fun, right?

Korea's railroad system has a long history, although the most well-known part of it is quite recent. The first railroad opened between Seoul and Incheon on September 18, 1899, while other lines were laid during the Japanese occupation. Although some lines were damaged during the Korean war, they were eventually improved over time. During the 1970's and 80's, a state-run corporation known as Korean National Railroad maintained control over improving the country's railroads, along with electrifying the lines and adding additional tracks. 1974 saw the country's first subway system - an outgrowth of the aforementioned train lines - and development of subway tracks often took advantage of commonly used paths in the past. Trams once used in the early 20th century gave way to subway lines that followed some of the same paths through what is now downtown Seoul. (Wikipedia; source 1, source 2)

Although the KTX was first proposed in the 1970's as a way of connecting Seoul and Busan, but was originally scrapped in favor of building an expressway. After realizing that the expressway wasn't enough to handle the traffic, construction of a high-speed railroad began in 1992, struggled through the IMF financial crisis, and didn't finish until 2004. Although originally opening to less-than-stellar results, the train service gained popularity over the next few years, and eventually moved into profitability in 2007 (Wikipedia).

Now that you're caught up on the history, it's time to take a look at your current options:
Buying tickets is quite easy. Every train station offers at least a couple automated ticketing machines (Seoul Station has dozens of them) that help you through the process in either Korean or English. Start by selecting 'Purchasing' on the left, then choose your destination. I should note that your starting point is automatically assumed to be the station you're currently at - if your trip will have a different starting place, check this before proceeding!

Choose what kind of train you're looking for - not every class stops at every destination, so choose a more general option like 'All Trains - Economy' near the bottom of the screen.

Next, choose your destination - the most common destinations or those with a KTX station are listed first; other destinations are listed in alphabetical order. Consider that some cities have multiple train stations (Seoul offers Yongsan as well as Seoul Station; Daejeon has Seodaejeon as well).

The moment of truth is next - which trains connect the two stations, and when they leave. Bear in mind that any error messages or anything that mentions a lack of trains can be corrected by changing your destination. Remember that choosing a 'here' and 'there' doesn't mean there's a train that actually connects the two stations. In any case, you should eventually have some choices between the aforementioned various classes of trains. Unless you want to get on a train right that minute, feel free to go back and compare the time traveling versus the cost of the trip - they correlate very well, but the price isn't shown on the timetable page.

Once you've selected your trip, pay using cash (bills only) or a debit / credit card, then decide if you want a receipt and wait for your tickets to be printed. Now, it's time to look up: 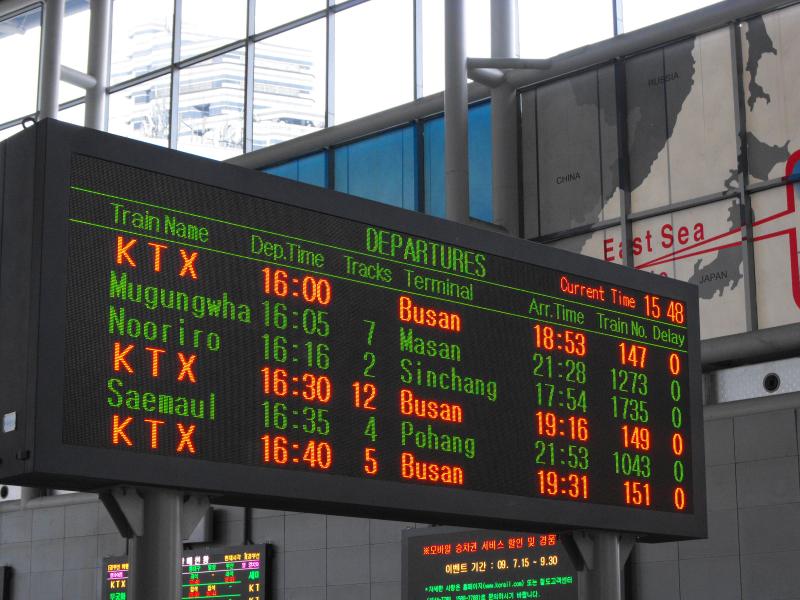 At this point, there's one VERY important thing to do - check the electronic boards to see which platform or track your train will come to. It is NOT listed on your ticket, so look for your train number on the boards (third column from the left) to learn which platform your train will leave from. This is especially important at larger stations that may have many platforms and trains leaving at about the same time. More than a few close calls have been averted by remembering 'platform 5' or listening to the audio announcements that play in the train station.

It's worth noting that missing the train is not the end of the world. If it happens, go back to the machine you bought your ticket at and select the 'return ticket' option. You'll lose a percentage of the ticket's price, but it's much less than the 100% you'd be out in other countries. From there you can buy another ticket or get your money back - either way, the choice is yours. If that doesn't work for whatever reason, go to the customer service center to return your ticket.

Most tickets will give you an assigned seat - there's no choosing a seat or indicating a preference - except in cases of 'standing' or 'non-assigned' seats. These are code-words for 'you don't have a seat', so you might find yourself borrowing an empty chair or sitting between cars. This isn't necessarily bad - and if you NEED to get somewhere it's the only way - it's just less comfortable. For the most part, borrowing a seat on a 'Standing Room Only' ticket is permissible, so long as you give way to the person who's bought that particular seat. If someone comes to claim their seat, move onto another empty seat or retreat to the area between cars.

When booking your return trip, consider whether the return trip is likely to be sold out - buying early can help to prevent that possibility. If making a weekend trip to, say, Busan, consider buying your return ticket as soon as you arrive at your destination (+1 for planning ahead, and that seat is reserved for you).

I posted about the prices of tickets awhile ago - check out this earlier post for more information about traveling by train.