Skip to main content
A note to my wonderful veteran expat readers: 'Life in Korea' posts are aimed primarily at the newer expats among us. Think of these like the 'Idiot's Guide' books - an introduction for some, a review for others. If I missed something or you can clarify, comment away!

So you're at the subway station or train station and don't want to carry your backpack / heavy purse / manbag with you while you go exploring. Lockers are available in virtually every subway station, along with most train or bus stations, but some of the newer system are a little... funky.

Once upon a time, coin lockers (not pictured) ruled the day - in fact you can still see them in some of the older subway stations that haven't seen an update in awhile. These usually are as straightforward as those in the US: open door, put stuff in, insert appropriate number of coins, then turn and take out the key, locking the locker. Outside of the fact that they're the only ones that only take coins, a small red number should tell you how many 100-won coins to pump in.

The first generation of electronic lockers kept the same look, but added a DOS-looking screen and paying section in the middle: 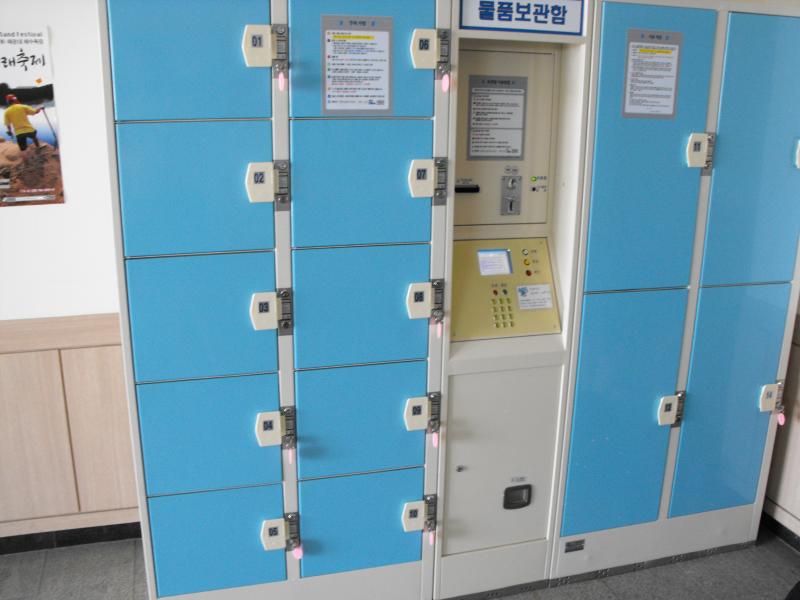 This example (from just outside the Haeundae Beach tourist information center in Busan) is a bit smaller than most, but the locker sizes are representative - small and large. There is a slot for your 1,000 won bills and your various coins - just try not to pay for a large locker with small change. 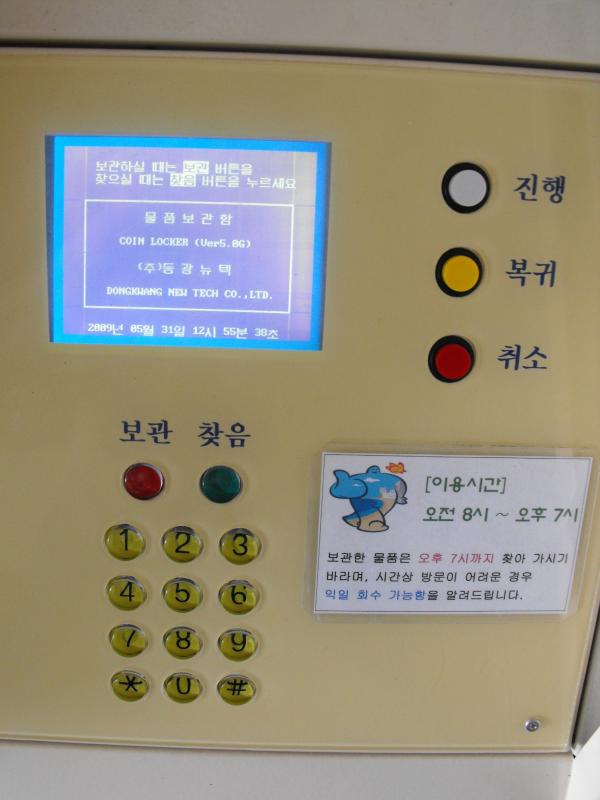 To lock up your stuff:


To unlock your stuff:

Since this system is aging, don't be surprised to see it become replaced with the next generation of lockers.

The current generation found in more and more subway stations is a yellow set of lockers: 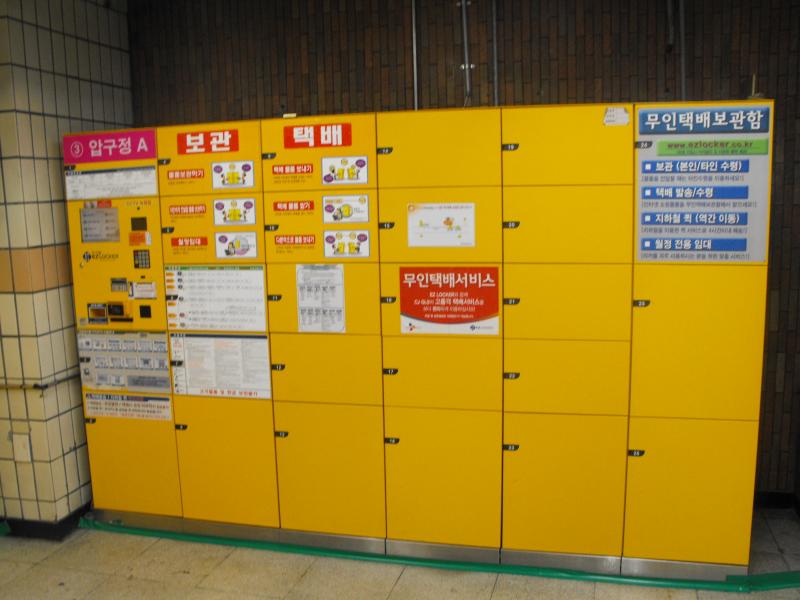 While there are adequate directions at the official Korea Tourism website, here are the basics: 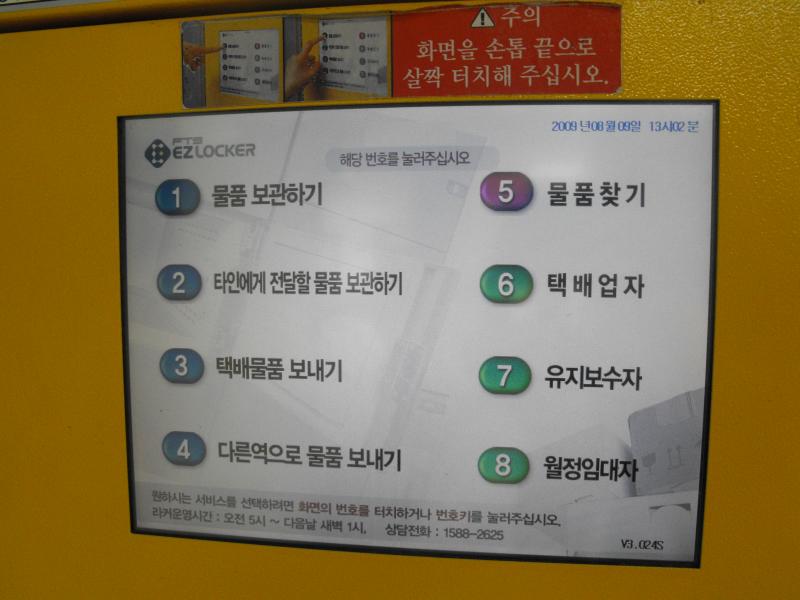 To lock up your stuff:

To unlock your stuff:

For a little twist on things - because you knew life in Korea wouldn't be THAT easy, right, it turns out that line 9 has their own system of lockers that are white: 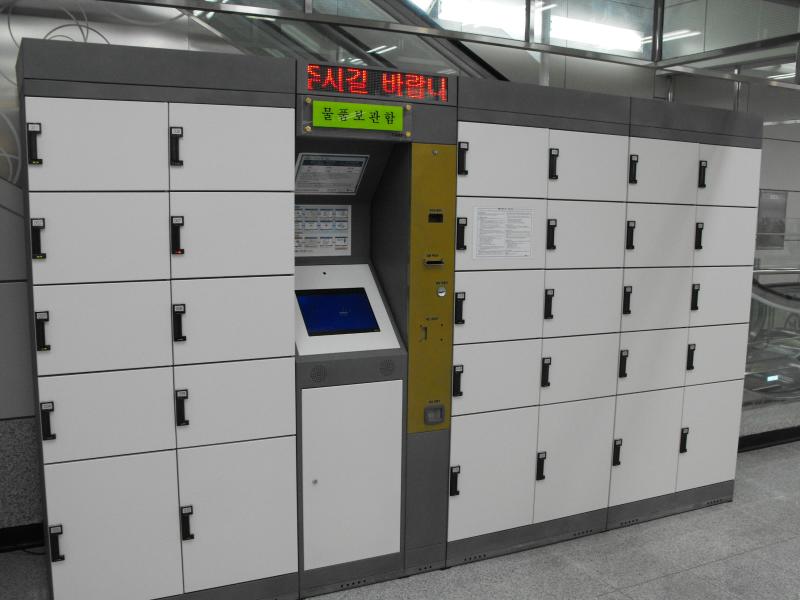 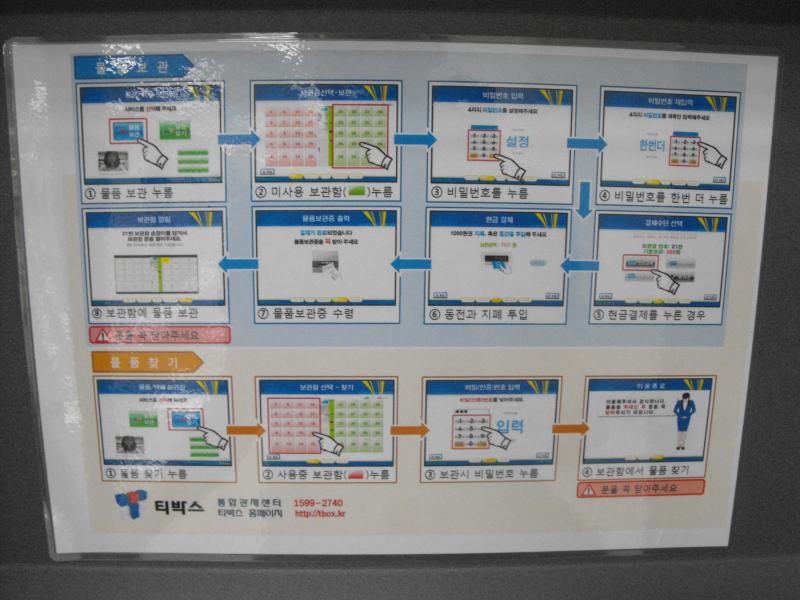 The helpful sign above the electronic screen - again, all in Korean. Argh... Thankfully, the process is basically the same as the other electronic lockers. The trick is sometimes to struggle through it once so you'll get it the second time around.