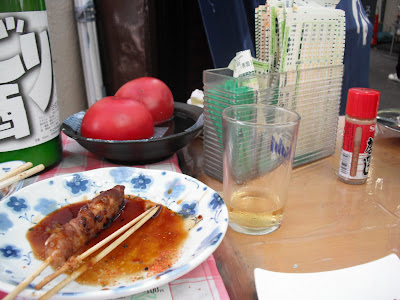 Up until now, my Tokyo food experiences have largely consisted of the the sporadic grazing mentioned in the previous post, and a few excellent tonkatsu sanwiches from the convenience store. As such, I was beginning to think I was being priced out of the bulk of Tokyos food hotspots. A trip to the tourist mecca of Asakusa on Sunday changed that however, as I came across some unexpected street action and got a glimpse of Tokyo life into the bargain.

As one of Tokyo's oldest areas and the site of the Senso-ji shrine, Asakusa positively heaves with tourists (and the kinds of businesses designed to cater for their every need.) Here you can buy everything from Kiminos to rides in people drawn rickshaws (jinriksha.) To cater for the hungry masses, numerous Japanese restaurants line the narrow streets, and the area directly in front of the shrine is home to a small collection of street carts and food tents.

It was in the later that the fancies of my over-active imagination finally began to take physical form. Trays of roughly hewn takoyaki stared up at me from the carefully arranged cart of one vendor, while skewers of sliced scallops, chicken and pork begged an introduction to the grill at another. Further on, a hotplate heaved with a writhing mass of yakisoba noodles, and an old man fried up a heavy batter of what I guessed to be okinawaki, the thick heavy pancake not dissimilar to my own beloved pajeon.
Yet despite everything on offer something held me back. Amid the trinkets and the touristsm, the food seemed somehow laboured, a way to spin a couple of hundred yen from the passing temple trade rather than anything authentically Japanese. With a hefty price tag starting at about a quarter of my meagre budget for the day per item, I made an executive decision to walk on by and see if I could score something else instead. 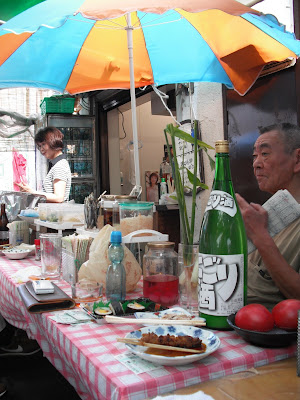 I'm glad I did. No sooner had we left the temple area did we stumble upon devotion of an entirely different kind - directly in front of us hundreds of Japanese men were congregated in a large hanger-type building, cigarattes drooping from their mouths, faces upturned towards tv screens blaring the frenzied excitement of a horse race. In an alleyway branching away from the main building, smaller groups hunkered around countertops and tvs, drinking, smoking and eating yakatori straight from an outdoor grill. It was at one of these that, after showing a mere flicker of interest, I was graciously made way for, and my first genuine street food experience of the trip finally began.
Sandwiched between a large Chinese man and a friendly Japanese guy called Nokiyoko, I ordered two skewers of chicken yakitori at 100 yen a piece. Our companions then topped up our order with a tall cold bottle of Asahi beer from Nokiyoko, and a trio of shrivelled pink berries from the Chinese man (the impending consumption of which sent him into convulsive fits of laughter.) 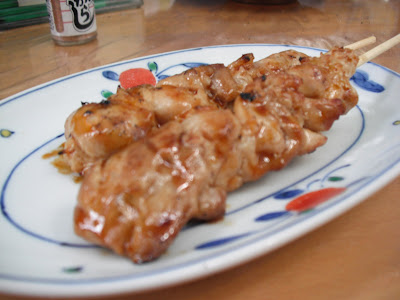 The chicken was good, smoky from the grill and boasting a pleasantly sticky teryaki sauce. The berries for their part delivered a salty kick, followed by a jaw twisting sourness that can only come from an extended period of pickling.
The beer was cold.
Sarah and I sat awhile shooting the breeze woth Nokiyoko and taking a welcome break from the sun and blisters of a shotgun Tokyo visit. While the yakatori wasn't the best I've had on this trip, the atmosphere certainly was, reminding of the supreme value of food and the reason I'm investing so much time into writing up the littlest details of my daily curbside travails.