1) A Korean teenager joins ISIS
Police concluded that a Korean teenager surnamed Kim missing since Jan 10 in Turkey voluntarily went to Syria to join ISIS. Using Mujahideen as his alias, the 18 year old boy inquired on Twitter about joining the terrorist group in Oct last year, and wrote in his Facebook “I want join Islamic state. I want leaving my country and families just want to get a new life.”  Kim had trouble in mixing with friends, and quit his middle school a few years ago. It is the first time a Korean joined ISIS. 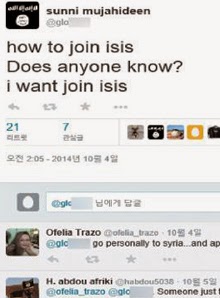 If Kim intends to stay in Syria, all Koreans are praying Kim better work as an ISIS cook or a nurse, instead of showing up in black in video with a couple of orange cloth hostages next to him.
2) Anger mounts over tax hike in middle class
The middle class are fuming at the new tax law revised last year that turned out to take lots of money from their pocket in tax return, turning the usual “13th month salary” into a tiny pocket money. People got more upset as the government gave assurance the middle class would be untouched when it proposed the new law that is very complicated to explain with a few sentences. The Finance Minister had to make an apology, and President Park’s approval rate keeps falling from nearly 70% last April to 35% last week.

President Park promised more welfare without tax increase during the 2012 presidential campaign, much like Reagan’s “Read my lips. No new taxes.” Voters had to know there is no hot ice cream, and politicians tend to keep two tongues in one mouth.
2. Economy
1) Hyundai Motor sells more, earns less
In an investor conference call, Hyundai Motor reported its lowest annual operating profit in four years at 7.55 trillion won ($6.95B), despite 4.8% increase in global sales. It sold 4.96 million vehicles, a 4.8% up from 4.73 million units in 2013, making 89.25 trillion in revenue, up 2.2% over 87.3 trillion won in 2013. Hyundai said the drop in profit was mainly due to falling won-dollar exchange rate, and the declining currency value in other nations like Russia. Hyundai also announced two groundbreakings in China in 2015, one in Hebei and the other in Chongqing.

To please its disgruntled investors over land purchase, Hyundai said it will raise the current 1,950 won dividend per share to 3,000 won, a whopping 54% increase, automatically triggering my wife, a Hyundai stock owner since 1999, to thumb through Louis Vuitton catalogues.
3. Automotive
1) Ssangyong Motor launches new SUV
Ssangyong picked a small Italian town Tivoli as the name for its new small SUV. Tivoli is Ssangyong’s first new model since it went belly up in 2009. Tivoli has 1.6L engine with126 HP and 12.3 km/L Since taking pre-order on Dec 22, it has received 5,000 orders until now, with two months waiting line, expecting to sell 38,500 Tivoli models in 2015.

Lee Yoo-il, CEO of Ssangyong, made a surprise announcement he will retire in March. Ex-Hyundai, Lee was hired in 2009 when the company was in court receivership, turning the company around in six years. Mr. Lee was the head of Hyundai Canada in Toronto in early 90’s while I was a tail in Bromont Plant in Quebec. Well, sorry, I have never met Mr. Lee.
2) Hyundai shows off its pick-up truck
Hyundai displayed its concept pick-up truck Santacruz (HCD-15) at Detroit Auto Show. Santacruz is powered by 190HP 2/0L turbo diesel engine and features 4WD H-Trac system. Though Hyundai said they have no plan for its mass production, auto analysts believe Hyundai will eventually as a breakthrough to increase market share in North America.

Hyundai once produced pick-up truck, a tiny 1.6L gas engine variation from its Pony passenger car, Hyundai’s first own design model. Launched in 1976, the last Pony was produced at Ulsan plant in Jan 1990. Ex and current Hyundai employees can be divided into two groups; before Pony and after Pony. Old folks if you saw pony production in Ulsan, young chick if you didn’t. I am an old fart while Mr. Lee at Ssangyong is a Cro-Magnon.
Regards,
H.S.
Korea TESOL: Helping Teachers Connect
Promoting learning and cross-cultural understanding among English Teachers and Learners in Korea.