Skip to main content
1) A Korean coast guard killed by Chinese fisherman
Cpl.Lee Cheong-ho, 41, a member of a Coast Guard SWAT Team, was stabbed to death by a Chinese fisherman in . The SWAT team was in apprehension operation to seize an illegal Chinese fishing boat in Korean territory, and Lee got stabbed in the stomach by the captain of the boat. Cpl. Lee is leaving behind his wife and three kids. The captain and seven other fishermen were arrested on charges of murder. With mounting public anger against the Chinese fishermen, the Chinese government officially expressed regret over the killing. With fish not sufficient in the Chinese coast in , mostly due to pollution, Chinese fishermen are tempted to throw nets in Korean sea. 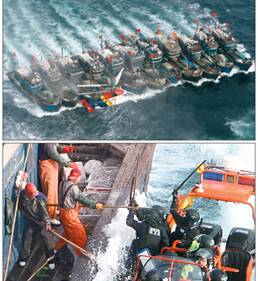 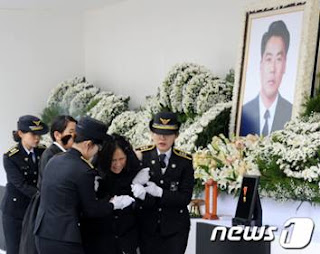 The Chinese fishermen used to venture into North Korean waters frequently, but not any longer after two of them got killed by North Korean patrol boats a while ago. Probably one of few things Kim Jongil gets credit as you get picked on permanently unless you show your muscle.
2) Tension with escalates after 1000th ‘Comfort Women’ protest
A statue of a ‘comfort woman’ forced into sexual slavery during WWII was set up to mark the 1,000th protest in front of the Japanese Embassy in . The first protest took place on Jan 8, 1992, and the comfort women have held protests every Wednesday since then. In March 2002, when the 500th demonstration was held, the Guinness Book of World Records put it as the longest regular protest of a specific issue. As many as 200,000 comfort women were sent to , and 80% of them were Koreans. As time goes on, there are only 65 survivors, mostly 83 to 93 years old. The comfort women are demanding official apology, and full compensation from the Japanese government.  President Lee Myungbak met with Japanese PM Mr.Noda over this issue over the weekend. Mr.Noda asked the statue be removed, but Lee retorted that there can be the 2nd or the 3rd statue if the Japanese government keeps ears closed to the voices of the comfort women. 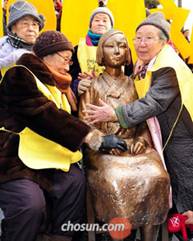 The rationale from the Japanese government is that Japanese government made a comprehensive compensation for its colonial rule over by giving U$500 million to in 1965, and thus no more apologies or compensation is required. A little problem with that rationale is that the ‘comfort woman’ issue did not come up in 1965, as most of the comfort women were too ashamed to speak out for what they did. It would be very hard for a woman to say publically ‘I had given physical entertainment to thousands of Japanese soldiers.’
2. Economy
1) Good news for economy with a former Miss ’s scandal with her boyfriend?
Lots of voyeurism in as Mr.Huh, a Taiwanese-American, put on his homepage the video clips of his private bed room activity with Ms.Han, a Miss Korea and anchor woman. They once lived together, but with the relationship going sour, Mr.Huh decided to release the video as a revenge for getting nearly beaten to death by gangsters hired by Ms.Han in March.  No comments yet from Ms.Han at this time. This is the third time a celebrity’s personal hardcore video was released to the public. First, it was Ms.Oh, an actress whose video went wild fire through diskettes in 1998, and it triggered home computer boom in . The second was Ms.Baek, a singer, whose graphic scenes in 2000 spread around via internet, thus advancing home high speed LAN by 10 years. The latest Ms.Han’s video is floating around mostly in smart phones, so Samsung and Apple are in big smiles.

The ultimate victim from Ms.Han’s scandal was not Ms.Han herself, but the average Korean husbands. The video showed the greatness of the Taiwanese guy’s, and Korean wives keep comparing with their husbands’.
2) in dilemma over
What if my friend’s enemy is my friend? reluctantly joined efforts for sanctions against by adding more than 100 Iranian groups and individuals to its financial blacklist and cautioning local firms against purchasing Iranian petro products. With the stricter measure, the organizations and individuals will now have to receive approval from the Bank of Korea before making any foreign currency transactions.  The dilemma is, while is a blood ally with the , has to rely on nearly 10% of total oil imports. 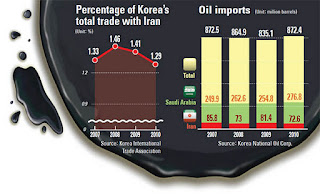 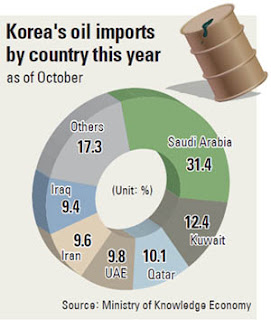 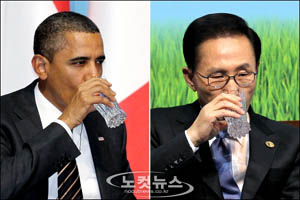 has traditionally been a good friend to , even after Mr. Alphabet became the leader of . The busiest street in Seoul stretching from Renaissance Hotel to Intercontinental Hotel is called “Teheran Street” after Seoul and Teheran made a sister city relationship in 1979, and many Korean companies, including auto makers, have strengthened their business relationship with Iranian partners.. There was no bloody past between the two countries to boot, thus no need to squabble over a statue.
3. Auto Industry
1) Hyundai beats Samsung in profits for the first time
Hyundai and Samsung have been perennial rivals for #1 in for decades, and it was always Samsung with the most profit. It may change this year as Hyundai is expected to reap 18.05 trillion won(U$15.52 billion) in net profit in 2011, while Samsung will trail with 17.75 trillion won. Hyundai’s growth came from hot sales of Hyundai and Kia models after Tsunami in in March, and Samsung’s fall was due to the poor performance of flagship company Samsung Electronics’ LCD business. While Hyundai trounced Samsung in profit, many analysts think Samsung is still the top as its total revenue would be more than Hyundai’s in 2011, and will retake #1 position in 2012 with the high sales of smart phones. 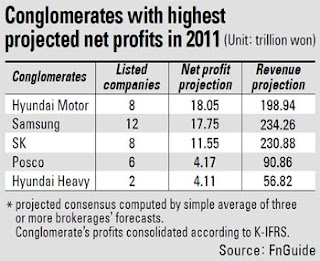 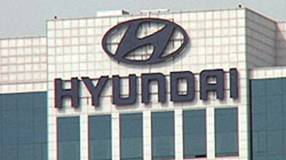 I have a personal vendetta against Samsung.  I applied for Samsung internship along with twenty of my classmates in senior year in 1986. All of my friends got the admission, but not me. For some reason, Samsung singled me out as a reject and I ended up with Hyundai Motor after senior year. I am thinking to release my secret personal video clips against Samsung;  My living room with Sony TV, LG refrigerator, Electrolux vacuum cleaner, Apple cell phone, but no Samsung whatsoever……
Regards,
H.S.