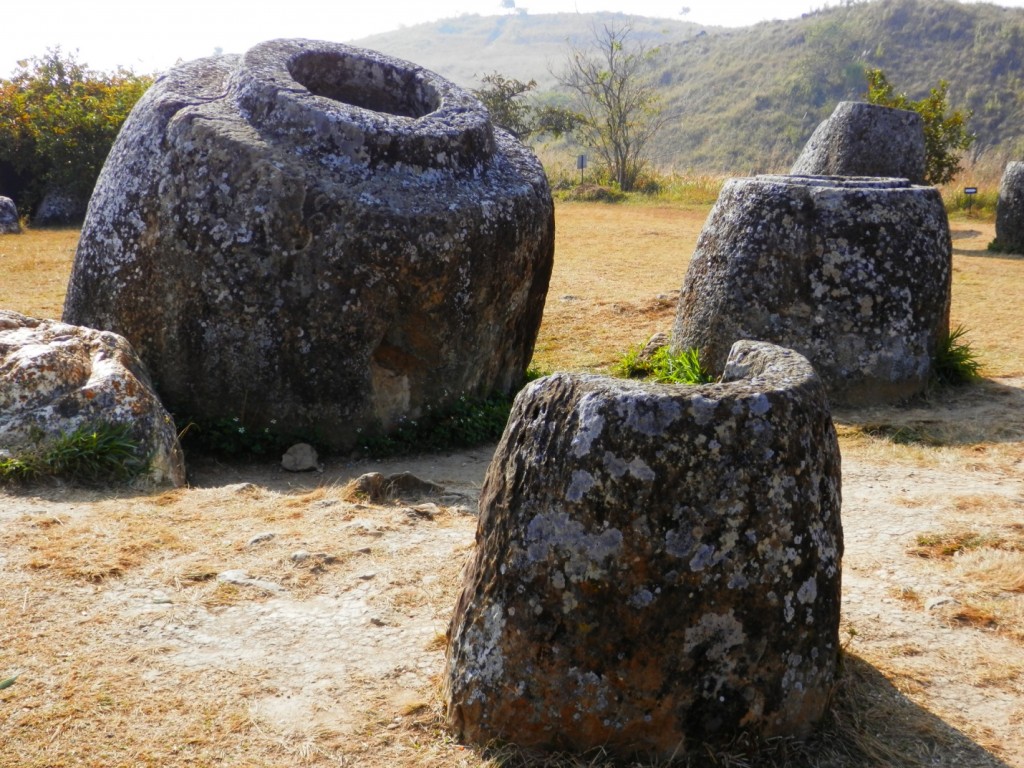 Site 1 is home to many of the Plain's largest jars.

While not nearly as famous or touristed as England’s Stonehenge, the Plain of Jars in northern Laos poses a comparable historical puzzle. No one can say for certain what the literally thousands of immense stone vessels – some weighing in excess of seven metric tons – sprinkled across more than 90 sites throughout Xieng Kouang Province were originally intended to be, who exactly built them or when, nor how some of them were transported as far as 50 kilometers from the sites where they were quarried to their current locations. Here truly is one of the marvels of the Neolithic world, in a place few people have ever heard of and far fewer have visited. (I myself had never heard of the Plain before my first trip to Vientiane, the Lao capital, in July 2013, and I’ve lived in Southeast Asia for
over seven years.) 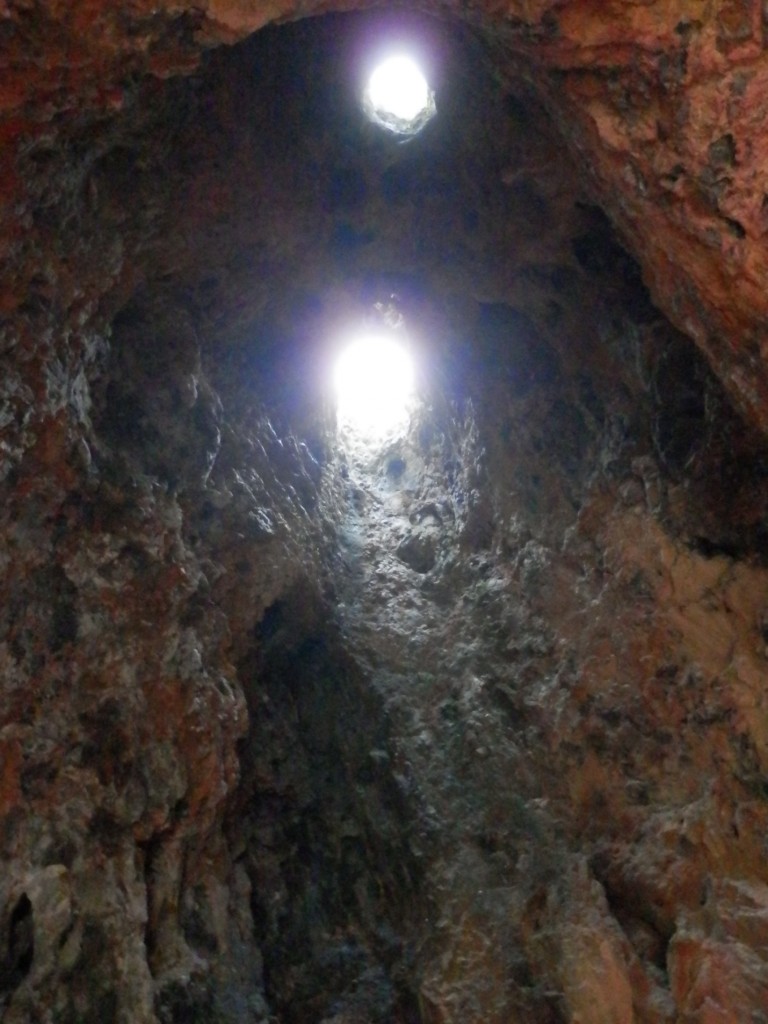 Interior view of the cave where Madeleine Colani first sought to unlock the mystery of the Plain of Jars in 1930. The apertures are man-made, and were believed by Colani to be chimneys for a crematorium.

What little is known–or at least assumed–about the Plain of Jars is largely the result of the work of French geologist/archaeologist Madeleine Colani, who in 1930 investigated the area now known as Site 1 and emptied the single jar still located inside the small cave there. Based on her findings, which included human bone fragments, beads and charcoal, Colani concluded that the jars were funerary urns designed to hold the cremated remains of several individuals apiece. Most of the jars had been emptied long before Colani’s arrival, however, and her investigations were confined to a relatively small number of sites, so the debate over the jars’ actual purpose (or purposes) continues more than eighty years later. While the use of stone jars and boxes as sarcophagi was common among Iron Age Southeast Asian societies, there is also evidence to suggest that many or most of the jars of Xieng Kouang were, as their shapes suggest, initially used to store alcohol, which itself may have served to ferment individual corpses prior to their cremation and subsequent group interment in the largest of the urns. Inevitably, the question of whether those who employed at least some of the jars in this manner were in fact the same people who created them has also arisen, while more recent alternative explanations – such as that the jars were simply rain-catchers to provide drinking water along what were once fairly popular regional trade routes – have further fueled a debate which, for reasons discussed later, is highly unlikely to be resolved anytime soon.

Part of the problem stems from the impossibility – thus far, at least–of dating the jars with any degree of certainty. The Iron Age in continental Southeast Asia lasted from approximately 500 BC to 500 AD, but the handful of archaeologists who’ve performed excavations on the Plain since Colani’s time have proffered estimates of its age ranging from the second millennium BC to approximately the year 1000 AD. With neither written records nor much additional anthropological or archaeological evidence to bring into play, science is currently stuck at a crossroads without a map where the Plain of Jars is concerned.

An ancient mystery, then, but one considerably deepened by a very modern atrocity. Xieng Kouang was one of the most heavily bombed areas in the United States’ secret war on Laos from 1964 to 1973, and the Plain of Jars was in no way spared. Bomb craters pepper Site 1, the second-largest and most accessible of the Plain’s jar collections, while the nicked, split and/or completely shattered state of many of the monuments themselves bespeaks a disregard for the area’s historical significance on the part of the U.S. military every bit as profound as that it displayed for the local inhabitants. Indeed, the “plain” more closely resembles a lunar landscape in some places, with little in the way of level ground anymore thanks to America’s tireless destructive efforts. 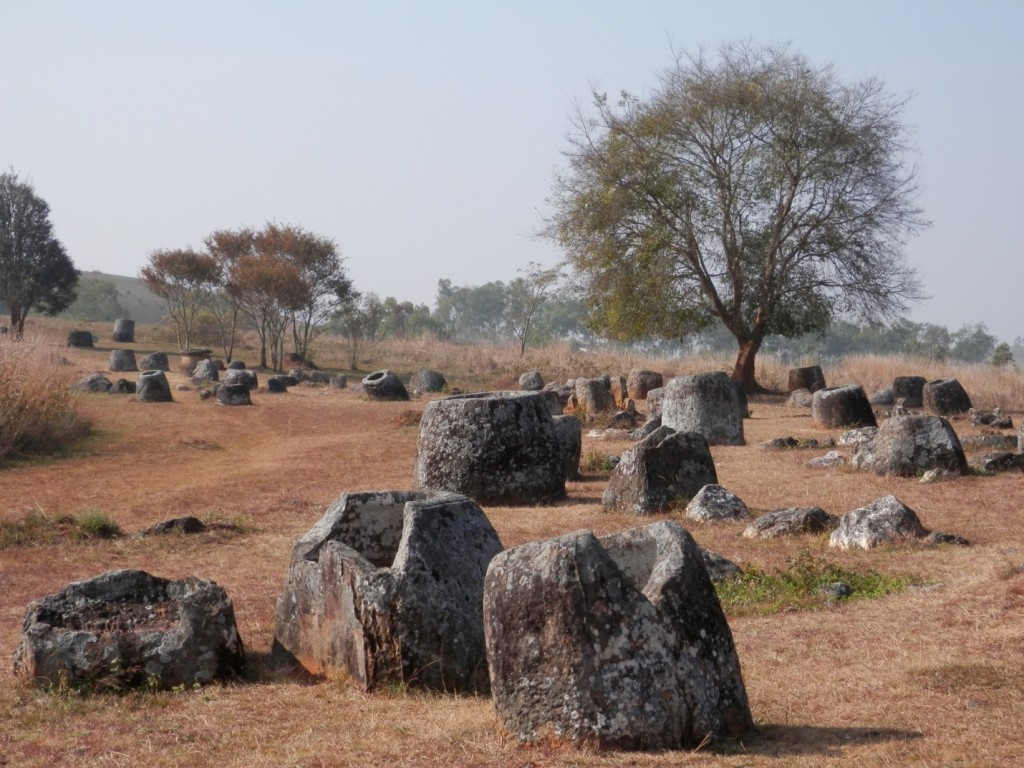 Site 1’s jars show more evidence of damage from U.S. air strikes than those at other locations.

Of course, not everything Washington’s war machine dumped on Laos exploded on impact, which means that the Plain of Jars offers not only the thrill of seeing something unique in all the world and highly mysterious to boot, but also the tang of genuine mortal danger, to this very day. Nearly as thick on the ground as the jars themselves, small concrete squares arranged in pairs at regular intervals, each with a meter or so of earth between them, mark spots where the Mines Advisory Group (MAG), a British-based, Lao-manned (or, more often, Lao-womaned) organization active in the country for nearly twenty years, has cleared the ground of unexploded ordnance, or UXO, from those long-ago attacks. The interior halves of the squares are always white, the exteriors gray or occasionally red, to mark the boundaries between areas cleared of subsurface UXO and those cleared only at the surface level. Visitors are “strongly advised” by bright red and white signs in both Lao and English at each site’s entrance to keep to the pathways between the white markers, but those willing to literally risk life and limb for a more up-close and personal look at the jars are not prevented from doing so. (Mind you, however, that the Lao government understandably accepts no responsibility whatsoever for the results.)

But even as the U.S. Air Force’s duds moulder beneath Xieng Kouang’s topsoil, killing and maiming dozens of people every year half a century after their first illegal employment, more recent visitors to the area have made their own distinctive contributions to the ongoing degradation of the Plain of Jars. It comes as no surprise (though still a disappointment) to find that many of the more intact jars have been utilized as trash cans by the hordes of Chinese and other Asian tourists who regularly pass through – particularly at Site 1, which is as far as most bus groups get. While small plastic baskets have been set up around all of the sites to collect rubbish, one is nevertheless just as likely to be confronted by discarded snack wrappers, tin cans, juice cartons and/or cigarette packs when looking inside a given jar as one is by water, spider webs, sprouting grass or random shards of rock. (Why some of the jars hold water, while others right beside them and in seemingly comparable condition do not, is yet another riddle.) With the sites being totally unguarded beyond their ticket counters, it’s a safe bet that this unfortunate trend shall only intensify with time. Even such modest trash receptacles as have been made available prove woefully insufficient against the Plain’s strong winter breezes, which send their contents skittering across the ground to join all the other random refuse abandoned there. 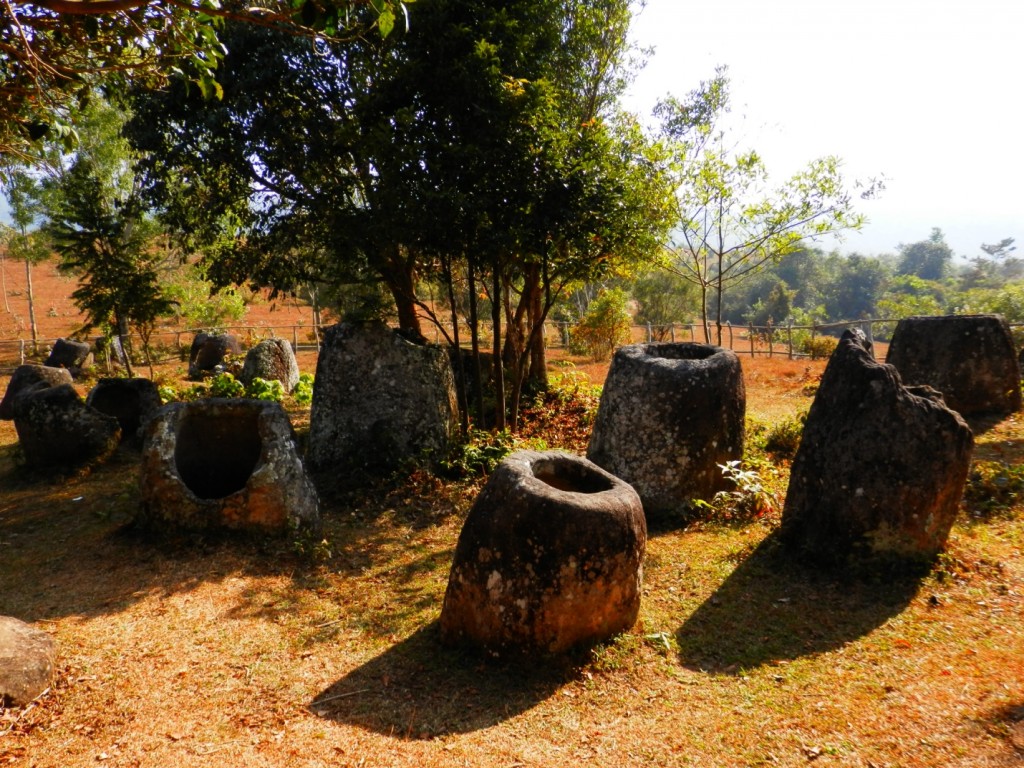 Site 3’s eerie privacy provides a perfect atmosphere in which to contemplate the timeless riddle of the Plain of Jars.

While most visitors to the Plain of Jars limit themselves to a gander at Site 1 before heading off to explore some of Xieng Kouang’s numerous other attractions on one- or two-day quickie tours, a total of seven sites have been declared safe for tourism by MAG and it’s well worth the time, effort and money to hit at least Sites 2 and 3 as well. (The sites’ numbering system roughly corresponds to their distancefrom the provincial capital of Pongsawan, and the first three – which should suffice for most travelers – can easily be seen in a single day.) While Site 1 sits very much out in the open on its militarily pockmarked plain, Site 2 is beautifully located in a pair of forested glades bisected by a dirt road, with fine views of the surrounding countryside from adjoining paths through the woods. Site 3, for its part, occupies a small copse surrounded by a labyrinth of rice fields, making the rather lengthy stroll from the ticket counter half the fun. Both are far smaller than Site 1, but also far quieter, prettier and less polluted (indeed, you may well find yourself completely alone at either or both of them, which allows for some wonderfully meditative moments in surroundings which are second to none). They also boast far higher percentages of intact monuments. One can even marvel at several jars here which have been split in half, thirds or what-have-you not by American weaponry, but by the immense bodhi trees which have risen right through them. All this while cowbells tinkle in the distance and the breeze whispers the eternal secrets of the Plain with some help from the leaves overhead.

Like so much else in Laos, the Plain of Jars is a wonder which has survived decimation only to stand upon its edge once again. Efforts to have the area declared a UNESCO World Heritage Site may help save the Plain from the worst ravages of historical violence and contemporary tourism, but with so many of the sites still off limits due to UXO infestation it will probably be a long time – if ever – before such status and the protection it brings with it are finally achieved. For now, therefore, the best advice one who’s been to the Plain can offer those who’ve not is to see it while you can – or rather, while it’s still worth seeing. If there is one thing the twenty-first century will not happily tolerate, alas, it’s a mystery.

Pongsawan can be reached by air (on Lao Airlines from Vientiane exclusively) or by bus from Vientiane, Luang Prabang, Vang Vieng and several other cities in Laos, as well as Hanoi. If flying, you will have to present your passport on arrival at Pongsawan Airport despite having arrived on a domestic flight, so be sure to keep it handy.