Skip to main content
1. National
1) President Park Geun-hye visits Europe
Park Geun-hye left for Europe on Sunday, to attend the biennial Nuclear Security Summit Meeting in Hague on Mar 25-26, and to visit Germany afterwards. She plans to meet with Chinese President Xi Jinping to discuss on how to have Kim Jong-un back to nuke talks, and to have meeting with Japanese PM Abe Shinjo with Barrack Obama in the middle. It would be Park’s first meting with Abe after her election win 15 months ago. She will have a summit meeting with Angela Merkel in Berlin, and is expected to make a key announcement over unification with North Korea in Dresden.

Park Geun-hye’s direct flight to Europe in Korean Air Force One can be compared to her father’s flight to West Germany to borrow money 50 years ago in 1964. South Korea being so poor, her father, Park Jung-hee, had to hop on a commercial flight from Tokyo to Bonn that had 8 stopovers like Hongkong and Bangkok, in a 28 hours flight to Berlin. Park Jung-hee never knew the money he borrowed from West Germany would turn out to be the money well spent that made his daughter’s comfy flight possible 50 years later.

2) A foot-in-the mouth joke costs a radio host’s job
Park Kyung-rim, a famous radio show host, had to resign after her joke over Korean civil defense exercise. Her radio show was delayed by 20 minutes because of the defense exercise broadcasting, and she joked “Who can give me compensation for the loss of 20 minutes of my show?” The homepage of her show got paralyzed by the criticism from the listeners who blamed Park for not realizing the fact South Korea is under constant threat from North Korea. South Korea has been holding civil defense exercise the 15th day of each month since 1972 in which all the vehicles have to pull over, and all the outdoor activities stop during the 20 minute exercise.

Ryan Garko, a former hitter from Cleveland Indians now playing for Samsung Lions, became a laughing stock during the exercise. When the exercise siren went off, Garko asked his Korean teammates rushing to dugout what is happening. His teammates said it was an air attack from North Korea, and Garko got panicky and called his wife in Daegu, home of Samsung Lions, to tell her escape. Knowing the truth afterwards, Garko suddenly began to swagger and vowed he would rush to Camp Walker, a U.S. military base in Daegu, and get an M-16 rifle to fight against the North Korean Army if was real.

2. Economy
1) Lack of brides for those born in 1990
Lack of spouse for men born in 1990 became real 24 years later. The year 1990 was when the ratio of baby boys was the highest with 116 boys for every 100 girls while normal rate is 103 to 107 boys. The reason stems from a superstition that girls born in the year of White Horse are stubborn and will face a tough life, and the year 1990 was the very year of White Horse. With ultrasound available at that time, there was high chance of more abortions in that year. The year 2002 was another horse year, but it was around the time the traditional preference for boys was on the wane, thus leaving 1990 as the year with the biggest imbalance due to superstition.

Just a little plug. My first son serving in South Sudan as a U.N. Peace Keeping Force was born in 1990. While a marriage can be his problem in the near future because of 1990, he is facing an immediate problem. He has completed junior in psychology at Washington University in St. Louis, and is looking for an internship to start after he retires from the army in June this year. He says it is a prerequisite these days to have an intern experience before graduation. If you happen to know someone or a company who can hire an intern, please let me or him know. ([email protected])

2) Drinking, smoking and dating relaxed for cadets
The Korea Military Academy, Korean version of West Point, announced it will allow its cadets to drink, smoke and date outside the school, breaking the ban that has been in place from 1952. Under current rules, the cadets can not smoke at all, may drink only under the blessing of superiors, and can not engage in any sexual relationship even outside school. The new rules will allow the cadets to drink or smoke as long as they are not engaged in official duties or attending official events outside the school. They can also have sexual relationship outside the school unless it causes social and moral issues. The rules had to be relaxed after a recent court ruling that a cadet who got dismissed from the KMA in 2012 because he slept with his fiancée outside the school be allowed to return to school. 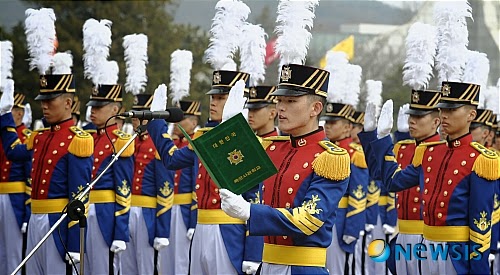 What would have happened to West Point established in 1802 if it had the same rules as KMA’s over drinking, smoking and dating? It would have closed in 1802.

3. Auto Industry
1) A Canadian bonus for Korean car makers
Korea and Canada reached terms for FTA after 8 years of negotiation. Canada will become Korea’s 12th FTA partner, and Korea Canada’s first East Asian FTA nation. As automobile accounts for 43% of Korea’s export to Canada, Korean car makers are expected to be the biggest winners as Canada will scrap its 6.1% duty within 2 years. A loser would be Korean farmers as they are to compete against Canadian beef with free duty around 2030. The FTA with Canada will go into effect early next year after ratification by lawmakers in both nations.

Canada comes as both good and bad memories to Hyundai. Good memories as Hyundai got confident about U.S. market penetration after successful launch of its Pony in Canada in 1982. So successful that Pony became the most sold import model in the first year of launch, and Hyundai had no qualms about selling its Excel in the U.S. from 1986. Bad memories because its Bromont plant in Quebec had to be closed in 1993 only after 5 years of operation. As the Bromont plant was its first overseas plant, Hyundai had to choose the best of the best employees to work in the plant. While the plant had to be closed, the experiences gained there were essential for the successful operation of Hyundai and Kia’s overseas plants afterwards. Am I meaning to say I was the best of the best in Hyundai? Well, people thought so at that time, probably wrongly, though.