1. National
1) Big change in mind with a political reformer
Ahn Cheol-soo announced to form a new party with opposition Democratic Party, ditching his ambitions to form his own new party. A founder of Ahn Lab, Korean version of McAfee, Ahn Cheol-soo has been known as the savior to correct all the bad things in politics ever since he announced his bid for Seoul Mayor in Sep, 2011, for which he yielded candidacy to his best friend who got elected. He ran for presidency in 2012, but yielded the candidacy again to someone from DP who lost the election. His approval rating nearly three times higher than DP, Ahn was in the process of forming his own party with the slogan of “New Politics.” With recent drop in his popularity, and difficulties to attract influential politicians who would gather under his “New Politics” umbrella, however, Ahn is joining forces with DP that he has libeled as Old Politics to fight against the ruling Saenuri Party.

Ahn has been decorating himself to appear as a mystic angel, with all the beautiful words from his mouth that would exist only in utopia. Facing realities with money and people in forming his own party prior to gubernatorial election in June, Ahn probably has realized the real world is very different from his dream. A fan of Ahn, my wife also realized after his decision to partner with DP that Ahn drinks normal water, not pure water, and goes to toilet as often as we do.

2) Doctors on Strike
This was the same headline I used 14 years ago when medicines had to be sold at pharmacy, not hospitals. They are striking again to protest the government’s plan to allow medical examination over the internet that can save patients with chronic diseases like high blood pressure and diabetes from travelling large distances. The Korea Medical Association claims it will put the health of patients at risk because it is too difficult for doctors to assess the patients accurately through the video on computer. The government called the strike illegal, and threatened to take actions that can put the strikers in prison for three years.

I applied, but failed to get an admission from a medical college after high school in 1980, ending up with engineering college at Hanyang University. Had I been accepted with the medical school, I might be one of the doctors on strike today. Compared to other nations, Korean doctors are not well paid under current national medical insurance system. My mother-in-law recently had a skin cancer surgery that took four hours of operation, and paid only 350,000 Won or U$333. This might be the same amount a flu patient would pay for a five minute talk with a doctor in the U.S.

2. Economy
1) Coffee shops winning over bars
An analysis by Statistics Korea showed that the number of coffee and juice stores in Seoul has increased an average of 16.7% a years from 2008, while adult bars for men only, which include hostess bars and room salons, shrunk an average of 2.4%. Koreans couldn’t understand the idea of drinking coffee that costs as much as a meal when Starbucks opened its first store in Seoul in 1998, but quickly began to hangout more in coffee shops. It has now become a local culture to have a cup of coffee after meals somewhere else. 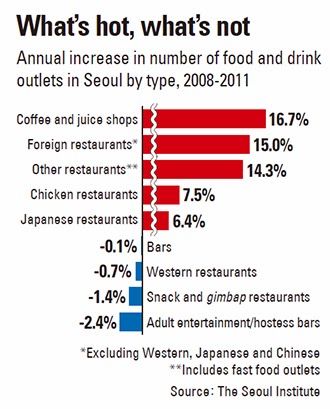 English speakers are to be careful when they offer someone a drink in Korean coffee shops as you might get a nice slap in the face if you say “Would you care for a sip?”  Sip sounds like derogatory ‘sexual intercourse’ in Korean, more like ‘f**k’ in English.  Not sure?  Try “Care for a sip?” with any Korean near you, and see what happens to your ear.

2) Korean emigrants drop to record low
According to the Ministry of Foreign Affairs, the number of Korean emigrants last year dropped to 302 people, the lowest since 1962 when emigration numbers began to be gathered. In pursuit of American Dream, many Koreans moved out of Korea in the 60’s and 70’s, with peak in 1976 with 46,533 people. With the rise of Korean economy in the 80’s and the difficulties in living in foreign nations, however, the number of emigrants began to slow down. The U.S. is still the most favored destination as 239 of the 302 emigrants moved to the U.S.  Canada was 2nd most popular nation with 23 emigrants, followed by Australia with 18. 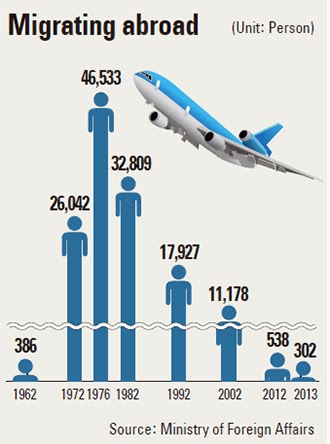 I was not an emigrant, but lived in Bromont near Montreal for five years while in Hyundai in the early 90’s. Would I have chosen to live in Canada forever if I was given a chance? Yes and no. Yes, because of the good social welfare system and beautiful landscape as wells as wide parking space. No, because of the damn snow that often turned me into a Yuna Kim on the road. 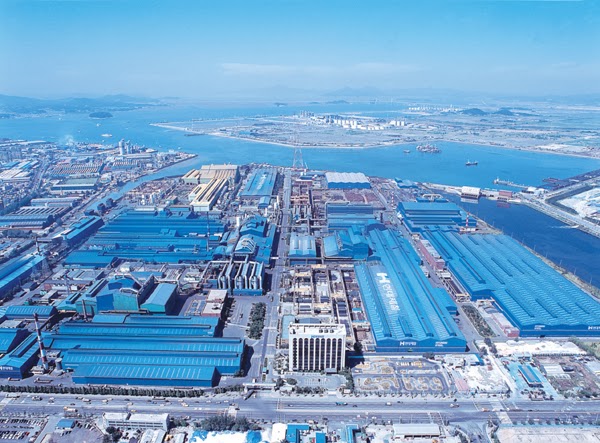 It can be necessary for auto suppliers to chip in some cost reduction for car makers so that they can sell more vehicles with price advantage, thus buying more from the suppliers in good cycle. Car makers would sell a lot more if they can also chip in, by reducing internal cost through productivity improvement with the union workers.