Skip to main content
1. National
1) A ‘comfort woman’ dies, only 55 known survivors left
Hwang Geum-ja, former comfort woman during WWII, died of illnesses at the age of 90 on Jan 26. Born in Hamgyong Province in what is now North Korean territory, Hwang was sent to work as a comfort woman from 1940 at the age of 16.  Without a regular job, she made a living by collecting and selling recyclable bottles and papers, and government subsidy of 400,000 won ($370) a month.  Despite her being poor, she donated 100 million won she has saved in her lifetime to a scholarship fund. With her death, there are only 55 known comfort women left. 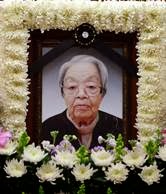 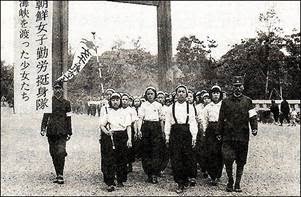 As the prostitution is the oldest job in the world, I asked my father born in 1935 what really happened. According to him, there was a push from the colonial government to find young women in the village to” work for the nation,” but those married were exempted. That was the reason my aunt, my father’s older sister, had to get married at the age of 15. With everyone trying to find a reason not to go, no woman in the village was sent to work as a comfort woman. To my father’s assessment, there was no ‘gun on the head’ or kidnapping type coercion, but the colonial government was involved to recruit young women to work for the soldiers.

2) Two Canadian hockey player become Korean citizens
Michael Swift, 27, and Bryan Young, 28, were granted South Korean citizenship, which gives the two Canadians the opportunity to play in the national ice hockey team. The Ministry of Justice recognized them as “exceptional personnel,” approving their applications for naturalization to a special immigration law that allows foreign nationals with exceptional talents to hold dual citizenship. The Korean Olympic Committee suggested their naturalization in December to improve the national team’s chances of qualifying for the 2018 Winter Olympics in Pyeongchang, Korea. So far, 46 foreigners have obtained citizenship under the special naturalization process 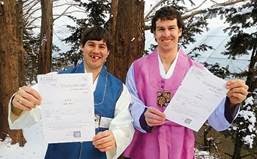 2. Economy
1) Personal information leak from credit card companies
Korean credit card companies are in total chaos as the prosecutors’ office found that an employee of the Korea Credit Bureau, a credit rating firm, illegally leaked 104 million pieces of cardholders’ personal and financial information to people marketing bank loans. The KCB employee carried the info via USB drives. The Finance Supervisory Service issued a warning to the public to be suspicious of any calls supposedly coming from financial companies, saying fraudsters might take advantage of the bad publicity about the leaks to cheat people, more like phishing. The three credit card companies directly hit were KB Card, NH Card and Lotte Card. As Koreans hold multiple credit cards, most of Koreans, including President Park and my wife, became the victims of the Big Leak. 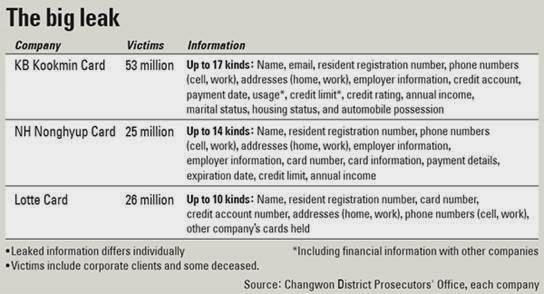 2) Korea to become #2 chip producer after the U.S.
According to the Ministry of Trade, Industry and Energy, Korea’s global semiconductor market share last year was 15.8%, up 1.6% compared to the previous year, with the total production of about $500 billion, thus becoming world’s #2 first time ever with Japan’s M/S dropping 3.6% to 13.9%. The U.S. was the top with 52.4%, with $166.45 billion.  Samsung and SK Hynics are the two giant Korean semiconductor producers. Intel was the world’s #1 chip maker with $49.1 billion sales, followed by Samsung with $32.3 billion. SK Hynics ranked 8th with $9.05 billion

SK Hynics was originally Hyundai Electronic which was founded in 1983, and then went bankruptcy in the late 90’s during the Asian crisis. SK Group bought it from creditors in 2012 to diversify its business fields. What is my story with SK? Well, it was one of the three companies that decided to hire me in Dec, 1986; Hyundai, Hyosung, and SK. I kicked SK the same way I learned from Samsung when it kicked me out with internship application in Jul, 1986.

3. Auto Industry
1) GM Korea may benefit at the sacrifice of GM Australia
GM Korea may have good opportunity to export more to Australia when GM closes its plants in the country in 2017. “Korea is producing high quality cars. It will have a major role in our manufacturing set0-up in the region and there is a free trade agreement coming up between Australia and Korea,” said Stephan Jacoby, GM’s international operation chief, Detroit Motor Show. The FTA reached in December removes immediately the 5% tariff on Koran cars. In 2013, GM Korea shipped 41,000 vehicles and 21,000 units of complete knockdown (CKD) to Australia.  Jacoby’s comments came after GM’s new CEO, Mary Barra, said GM “remains very committed to the Korean market.” The employees at GM Korea were let down recently when GM announced in Dec as much as 20% production reduction by 2016 as a result of GM’s decision to pull Chevrolet brand out of Europe. The young employees in GM Korea have started its own Jumpstart program from Aug, 2010, and many are hoping the exports to Australia supported by FTA do jumpstart the resurrection of GM Korea operations.