A quick tip if you’re practicing writing Korean, don’t overlook Korean spacing! You might be busy practicing and examining different Korean handwriting styles. Or maybe you are trying to prepare yourself best for a big language test in Korea, such as TOPIK. Well, it’s come time for you to educate yourself on correct spacing in Korean. 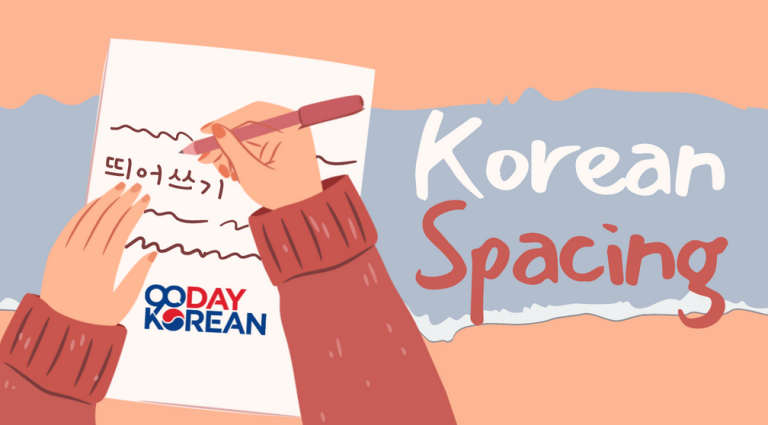 In this post, you’ll learn the magic rules of Korean spacing. It may not matter much for something like texting your friends, but it can be useful for writing proper academic papers or a speech or partaking in an official Korean exam, so you’ll want to know this.

As you learn Korean, it’s helpful to learn about Korean spacing (띄어쓰기 | ttuieosseugi). Similar to English or other closely-related languages, these spaces are used to help the reader distinguish the different components of a sentence.

There may be some points to pay special mind to when practicing Korean writing and spacing, so there are some more complex rules established as well. However, even Koreans or native speakers themselves don’t follow those, so you hardly need to pay any mind to them.

You’ll soon realize that it is actually super easy! There are just a few rules to follow, and they’re quite simple. We’ll discuss these rules further below.

Guidelines for spacing in the Korean Language

Together with the rules for correct punctuation, learning these few guidelines for proper spacing can make your written texts look incredibly natural and well-written.

Just like what is common in many other languages, including English, you should have a space between each Korean term.

Spacing rules on nouns and verbs

If you have a noun followed by a verb, each term should be presented individually. The same goes for Korean adjectives and nouns. Even in the cases where a noun is followed by another noun, you should have a space if you go by official word spacing rules.

However, there are some exceptions to these rules, which we will discuss further later.

The same goes for time vocabulary. For instance, if you want to say 12:50, then it can be written as 12시 50분, with space between.

Interestingly, however, you do not need to add any space in the middle of proper names, such as organization names or Korean names’ first and family names.

For example, Samsung Electronics is written as 삼성전자 (samseongjeonja) in Korean, with no space in between. However, a Korean name with a space between the family name and first name is not incorrect.

For numbers, when you write 3,052 as 삼천오백이 (samcheonobaeki), spacing goes between every ten thousand. For example:

Particles count as part of the word

So, whilst all words should be written separately from one another, Korean particles must be attached to the word it denominates. This means that there should be no space between the Korean particle and the preceding word. This is crucial in order for the sentence to make any sense.

With a particle marker, it becomes clear whether the noun is the subject, object, and so on in the sentence. Below are some examples of vocabulary that have particles attached to each of them and ought to be written without a space between:

This rule is true with every single particle marker, so it is extremely essential but thankfully easy to remember!

There are also some other exceptions and it is possible not to need spacing in some cases where you are using the 하다 (hada) verb. For example, if you write “to cook” as 요리를 하다 (yorireul hada) you obviously need to include a space between the noun and the verb.

This, however, can be bypassed by writing it as 요리하다 (yorihada), in which case the particle is absent, and no space is needed.

However, this rule does not apply to foreign terms. Instead, with them, a space is needed, even if there is no particle and the 하다 verb follows it. For example, “to have a blind date” is written as 미팅 하다 (miting hada) in Korean.

Finally, with fixed expressions such as 남자친구 (namjachingu), meaning boyfriend, there is no need for proper spacing, even though it meets the criteria of noun + noun.

And that’s it for Korean spacing! Remember that you can always check your Korean spelling with the use of this site. However, for the most part, this is simple enough to learn that you shouldn’t need to get too worried about not being able to remember it all.

How different is Korean spacing from your language’s spacing rules? Let us know by leaving a comment below! Next up, maybe you’d like to learn about the Hangul stroke order?

The post Korean spacing – Learn when and how to use it appeared first on 90 Day Korean®.