Skip to main content
Much like the more famous Japanese Haiku Korean Shijo poems (also spelled Sijo) are syllable based but are a bit longer and a tad more challenging than haiku. Shijo poems are like higher level haiku poems if you will. If you're in South Korea now the English bookstore whatthebook.com (located online as well as brick and mortar physical form in Seoul) has two sijo books on offer one of which is a children's book entitled Tap Dancing On the Roof by Linda Sue Park.

As Tap Dancing on the Roof @ WhatTheBook Bookstore's site explains :

"Sijo is a traditional Korean form of poetry. Sijo is syllabic, like Japanese haiku, with three lines of 14 to 16 syllables each: the first two introduce the topic, the third and fourth lines develop it, and the fifth and sixth lines contain an unexpected humorous or ironic twist. This collection contains 26 sijo, half on "Inside" and half on "Outside" themes, many humorous, all appealing to a child reader. The simplicity and accessibility of these poems will encourage children to try their hand at writing sijo".
I have heard only good things about Linda Sue Park's book as it is a good book to introduce Shijo to children. Haiku is taught in the west as a way of developing pronunciation through syllable counting. Well, Shijo is a more advanced version of this.

One Sijo book I highly recommend is Sunset in a Spider Web. It contains poems by Chosun Dynasty writers (mostly Gisaeng, Monks and Yangban of that age). The illustrations by Minja Park Kim are wonderfully sublime ! So too are the fine and sometimes rare selections chosen for this volume.

Here are some excerpts : 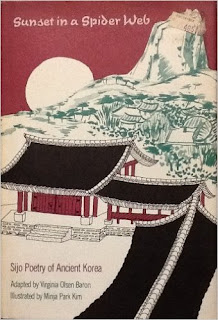 Only white gull and I
Know about the thirty-six peaks of Mount Chung-Ryang.
White gull will never tell anyone
But I am suspiciou of you, peach blossom.

You might fall into the stream
And, floating by, tell the fishermen about our secret place.
-- Yi Hwang.

Ten Years it took
To build my little cottage.
Now the cool wind inhabits half of it
And the rest is filled with moonlight.

There is no place left for the mountains and the stream
So I guess they will have to stay outside.
-- Song Soon.

Amazon.com has several copies for it for rather cheap as they are connected to the rapidly multiplying thrift / goodwill stores across the United States. Here's amazon.com's page for it
Also it may be found at Abebooks.com an online small bookstore aggregate. The link for Abe Books page for Sunset in a Spider Web is, well, you got it. It is a wonderful book that I often turn to every few months for inspiration. The excerpts I have shown you are not exceptions to the others in the book as all the poems in the book are well chosen gems making this a book very well worth its purchase.