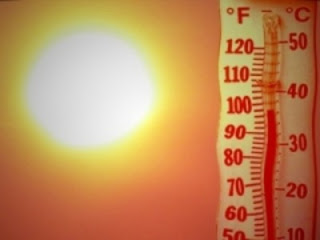 In many of my blog posts I have compared ways of thinking and doing things between my culture and Korean culture and come to conclusions that certain aspects of one or the other really are better.  I have come in for some abuse for saying this, not so much on my website but on sites that republish my blog or write articles for.

There are some issues, however, that are not really a matter of right or wrong or better or worse, these are the strange little things we perceive each other as doing that are simply culturally different.  This is not to say they are benign, though, they can often delight or regularly frustrate.  They are difficult to make a judgment about as they appear to be heavily rooted in culture and what suits one culture does not always suit another.

The Korean obsession with being warm is one of these little oddities, at least from my perspective.

Whenever I walk into a Korean's house I notice immediately that the temperature is about 5 degrees hotter than in mine, jjim jil bangs (kind of like warm relaxing communal areas, usually part of a public sauna or gym, for those with little experience in Korea) are popular, my wife sleeps on a heat mat along with many other Koreans I know, Koreans sleep on the floor which is heated, and in summer Korean people walk around with, what seems to me, excessive clothing - this has a lot to do with not getting a sun-tan but how they are not too hot has always amazed me.

Korean people also place a very high importance on warm food, of which they usually have three hot meals a day.  My Korean family doesn't understand how I can start the day without hot food and just eat cereal.

I came across another example of the importance of being warm (I think hot) when my wife was rushed to hospital the other day for emergency surgery.  She suffered a ruptured ovarian cyst, which meant that she had to go to a specialist hospital dealing with mainly women and pregnancy.

The doctors did a great job and she was fine, but when I visited the hospital I couldn't help but notice it was like stepping into a sauna.  The temperature in the room my wife was recovering in was 30 degrees on the thermostat.  When I went to visit the next day I came prepared wearing a vest and bermuda shorts as I sat at her bedside and I was still unbearably hot.  Needless to say my wife was fine and my mother in-law was sitting there still wearing a scarf and a jumper wondering what on earth I was complaining about.

It turns out that being extra-warm is particularly important with regard to pregnant mothers, new born children, mothers who have just given birth, and sick people generally.  This is fairly obvious, but I have never known the temperature to be so high in England for the sick in hospitals or when they are recovering at home.

I can easily theorize why this line of thinking appears in Korean culture.  Korea has harsh, freezing cold winters and I can imagine many people used to die because of them in the not so distant past, and especially the vulnerable like babies and sick people.  They have harsh summers too but, while it is possible to die from the heat, it is far more likely to die in the cold or exacerbate sickness through cold weather.

Keeping almost overly warm is a tradition that has lingered into modern Korean culture, and I would say that it has become a superstition and something that is now over emphasized and not necessary.  That is only from my point of view, though, and I have to admit I have rarely experienced Korean people showing discomfort in the kind of situations where they usually promote being warm.  Maybe they are so used to it, it is what suits them best and I am simply a cooler weather person coming from the famously inclement weather of the UK. 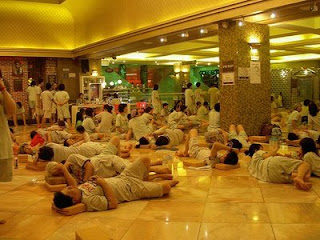 This problem with the heat I have could even be personal, I don't know.  Maybe Westerners coming to Korea love the idea of warm places like jjim jil bangs and being extra warm (over and above what we would normally do in the West) when they are resting or sick.  The only thing is, it does actually give me a few problems from time to time.

Last week my mother in-law was quite a drag, demanding that I sleep on the floor next to my wife at the hospital.  To keep her happy I said I would but it didn't take long for me to change my mind.  I felt a little guilty, but my wife was stable and at no risk after her operation and I did not see that it was integral to her recovery that I suffer with no sleep on a hot hard floor every night for 3 days, and neither did she.

It is also extraordinarily how hot my wife's sleeping mat is, which she uses regardless of whether she is sick or not.  I find it truly unfathomable that she can sleep on it, it makes me bake going anywhere near it and feels uncomfortably hot to the touch.

Needless to say, the issue of feeling the heat is a minor one, and the difference is because of culture and there is no right or wrong answer to the behaviour, it is just different.  Some cultural attitudes, thinking, and practices (whether Western, Eastern, English, Korean, or indeed religious), however, can and should be judged as right or wrong for logical and moral reasons.

I am a cultural relativist when it comes to matters of what temperatures we find comfortable to live in, but not in all matters.  Finding the line between relativism, cultural bias, and truth is a tricky one but also of high importance.

Obsession with being warm? You sure wouldn't know it by their tendency to leave all the windows open all winter, 'cause God knows having fresh air is more important than not freezing.

Right now I am wearing 2 coats, a hat, long underwear, gloves, and thick socks. I also happen to be sitting in my office where they refuse to turn on the heat.

Haha, yeah they certainly aren't warm all the time.  Even though I wrote this story, I have just spent the day freezing my arse off at school and playing volleyball in a ice box of a gym.  Very situational, Koreans.