In this article, we will be learning about Korean nature. Although you may often be seeing photos of the bustling city of Seoul when it comes to South Korea, you better believe that the Korean peninsula is equally covered in natural beauty, from its Northern border to the Southern shores. 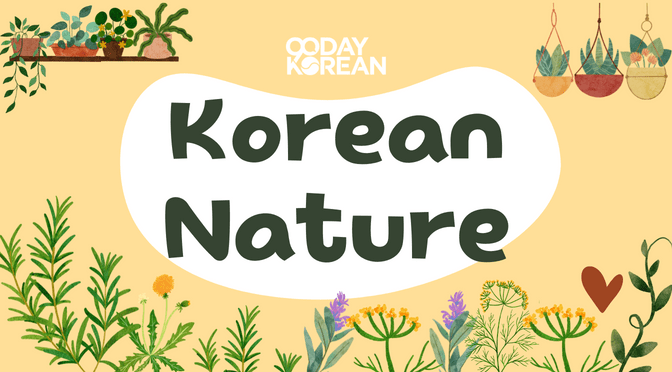 The country has lush forests, rolling mountains, valleys, green tea fields, and bamboo forests, just to quickly describe some of its natural qualities.

While we may not go in too deep with how nature in South Korea is shaped, you are about to learn tons of vocabulary related to nature in Korean. And, if lucky, you may even get to know some of the most popular nature spots among locals in South Korea!

What is “nature” in Korean?

The word for “nature” in Korean is 자연 (jayeon). You can use it whenever you are talking about nature in general. Of course, when you want to give a more detailed description of an aspect of nature, you will want to use specific vocabulary for it.

Now you have learned that the word for nature in Korean is 자연 (jayeon). But what about the specific vocabulary for each part of nature? Check out our list below! 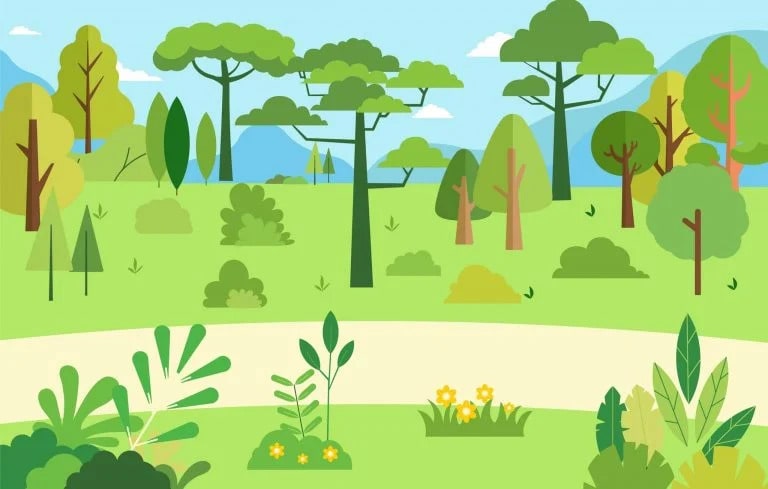 The word for “river” in Korean is 강 (gang). For example, the Han River in Seoul is called 한강 (hangang) in Korean.

The word for “lake” in Korean is 호수 (hosu). When you are referring to a specific lake, such as Lake Superior, you will first say the name of the lake – in this case, Superior, or 슈피리어 (syupirieo) – and then just 호 (ho) added on in a lot of cases.

For example, Lake Victoria is 빅토리아 호 (biktoria ho), Loch Ness is 네스 호 (neseu ho), and so on. In other words, as a general term, you may use 호수 (hosu), but when you want to discuss a particular lake, you may drop the 수 (su).

The word for “sea” in Korean is 바다 (bada). It can be also used in reference to the ocean; however, the word ocean has its own word in Korean as well, which is 대양 (daeyang). And when you are talking about specific oceans and seas, the word for sea and ocean may be further altered.

For example, the Pacific Ocean is called 태평양 (taepyeongyang) in Korean. Meanwhile, Baltic Sea is 발트 해 (balteu hae) in Korean. In general, you may want to memorize the names of different seas and oceans in Korean, as they may not all follow a simple rule. 바다 (bada) you will most likely only use in reference to the seas in general.

The word for “mountain” in Korean is 산 (san). South Korea is full of mountains of different sizes and appearances, and each of them has a separate name, but also the word 산 (san) attached to them to describe they are, in fact, a mountain.

However, before using any of these words, always check the context, as the term used may differ. For example, the phrase “over the hill” in Korean is 한물간 (hanmulgan), instead of utilizing any of the basic words for “hill.”

The word for “forest” in Korean is 숲 (sup). For example, 서울숲 (seoulsup). The term also includes the following concepts: the woods, grove, thicket, and woodlands. You may also use the word 수풀 (supul), especially when referring to grove or bush.

산림 (sallim) is another word for forest. The word for rainforest in Korean is 우림 (urim).

The word for beach in Korean is 해변 (haebyeon). This can also be used to mean seaside or seashore. Some of the most popular beaches in South Korea are Haeundae Beach, Daecheon Beach, and Naksan Beach.

Do note that when these beaches are translated into Korean, the word 해변 (haebyeon) is actually not used. Instead, the word used for “beach” is 수욕장 (suyokjang), which more correctly translates as “water pod” rather than “beach.”

In other words, you can use the term 해변 (haebyeon) mostly when you are referring to beaches in general. However, you might want to refrain from using it when you are talking about a specific beach, especially if it is a common swimming location.

The word for “desert” in Korean is 사막 (samak). For example, “Sahara desert” in Korean would be 사하라 사막 (sahara samak). Note that this word specifically refers to the part of nature that is considered to be a desert and cannot be used in other contexts, such as the word “deserted.”

The word for “island” in Korean is 섬 (seom). For example, the small island Nami Island is called 남이섬 (namiseom) in Korean. However, do note that not all islands are the same.

A great example is Jeju Island, which in Korean translates as 제주도 (jejudo). This is because, in the case of Jeju Island, it gets referred to as a region, just like 경기도 (gyeonggi-do), the region surrounding Seoul, rather than as an island.

Dokdo Island is similarly only referred to as 독도 (dokdo). In contrast, Fraser Island is called 프래이저 섬 (peuraeijeo seom) and Ellis Island is 엘리스 섬 (elliseu seom). In other words, if the international name of the island has “island” attached to it, chances are it’s the same in Korean.

However, if it’s something simple like Bali or Hawaii, the word 섬 is usually not needed. Therefore, always double-check the Korean name of an island first.

Another thing that you’ll often see during winter is ice. In Korean, you can say this as 얼음 (eoreum).

The Korean word for “rainbow” is 무지개 (mujigae).

We have a separate article about colors in Korean if you want to know the Korean terms for each color in a rainbow.

As we continue to learn Korean words on nature, one last set of vocabulary we’ll be teaching you today is the vocabulary for natural disasters. These may also be useful and even interesting information to take note of as you are learning Korean.

Other words for nature and outdoors

Besides the highlighted vocabulary above, here is a more exhaustive list of vocabulary in Korean related to the natural environment that you might find useful.

There are two words for “fire” in Korean, depending on how you are to use it.

The more common term for “fire” in Korean is 불 (bul). Specifically, this word means flame or the object of fire. This is the term you may use for the flame you see when cooking, for example. It’s also used to describe foods that are so hot they make your mouth feel like it’s on fire, like 불닭 (buldak), aka “fire chicken.” It’s also popular to call a Friday night out, playing with friends, a 불금 (bulgeum), so a “fire Friday.”

The other term for “fire” in Korean is 화재 (hwajae). When you see a house or a building or the equivalent on fire, this is the word to use. Specifically, it describes a disaster caused by something catching on fire.

The term for “water” in Korean is 물 (mul). Many related Korean words exist, but this is the word you’ll want to use for water itself. We have a whole article dedicated to saying water in Korean – perhaps a great lesson to take next?

“Sun” in Korean is called 해 (hae), which is the most common term used.

The most common Korean word for “sunset” is 일몰 (ilmol). While the word for “sunrise” in Korean is 일출 (ilchul).

The word for sunlight in Korean is 햇빛 (haetbit). As the term says, you can use it when referring to sunlight.

The word for “moonlight” in Korean is 달빛 (dalbit). You can use it as you would use the word for sunlight.

The word for “sky” in Korean is 하늘 (haneul). You can use this same word also when you are talking about heaven in Korean.

The word for “star” in Korean is 별 (byeol). The word “star” has multiple meanings. However, 별 (byeol) refers to the ones you see in the night sky.

What are the most popular nature spots in South Korea?

For Korean people and tourists alike, there are many different destinations of natural wonders that you can venture out to in Korea. Here are just a few of them!

Jusangjeolli Cliff. This cliff is quite the stunner, thanks to how dramatically the volcanic rocks have been shaped over the years.

Cherry blossoms in Jinhae. Although you can enjoy views of cherry blossoms anywhere in South Korea, the town of Jinhae is quite possibly the most beloved for them.

Fall foliage in Seoraksan National Park. South Korea is full of national parks to explore, all of which come with their own charm and breathtaking beauty. Of them, Seoraksan, located by Seokcho, is perhaps the most stunning when it comes to viewing the yearly fall foliage, where the autumn colors fill the national park.

Upon getting there, you can also spot the towering bronze Buddha statue with the surrounding nature in Sinheungsa Temple, which is another sight to see.

Green tea fields in Boseong. Nearly half of South Korea’s green tea supply grows in these green tea fields, which is a beautiful and lush place to visit, especially during its peak time from May to August.

While this waterfall may not be the most spectacular one you see in your lifetime, this natural wonder is South Korea’s prime one and a quite relaxing site to visit.

Nami Island. This famous touring and filming location is especially loved for its numerous tall trees. You can find chestnut, mulberry, and poplar trees here. K-drama fans from around the world are among the many travelers on this island.

This garden was developed to be in harmony with the environment. It is intended to protect the ecosystem that has surrounded it, including endangered animals and plants. It is popular for the gardens with millions of flowers and trees and is a great picnic spot for visitors.

Seoul Forest. This former amusement park was rebuilt as a huge forest and theme park for those who didn’t want to travel far from this city to enjoy nature. There are walking trails in the area, deer-feeding activities, bicycle rental, and other activities that can be enjoyed by visitors.

In spring, this park is famous for its cherry blossom trees, while the Ginkgo Tree Forest is popular in autumn.

If you will be visiting Korea soon, consider taking a trip to any of the places we’ve listed above. Or if you have more time to spare, you might also enjoy going to Cheongsando Island, popular for its slow-paced living and the Slow Walking Festival.

If you’d like to learn more words related to other aspects of nature, like the four seasons (winter, spring, summer, autumn), go check out our article on weather and seasons in Korean! We’d also love to hear in the comments what is your favorite type of nature and what’s the best nature spot to check out in your living area!