For the fledgling movie reviewer, revealing one’s inexperience with cinema is never a wise move. And adding that this inexperience stems from an at best indifferent, at worst active dislike of the subject? Positively suicidal, at least in terms of becoming known as an authority on it.

Fortunately however, that is not my aim with this post. Rather, it marks the first of many movie reviews I’ll write as I personally struggle to see Korean cinema in a new light from now on, hopefully providing readers with an entertaining and informative guide in the process.

I won’t bore readers with the combination of personal factors that led me to underappreciate Korean cinema for the last 9 years here then; suffice to say, many had little to do with the quality of Korean cinema itself. Hearing of them though, no less than a professor of Korean popular culture, a professor of Korean literature, and a published science-fiction writer all recommended Peppermint Candy (박하사탕) for me to start with (the latter even loaned me his boxed set of director Lee Chang-dong’s DVDs), so I had high expectations for this movie. And even if you’re not blessed with such uniquely knowledgeable friends yourself, it doesn’t take long to learn that it has a strong place in Korean popular culture (it was the first domestic movie chosen as an opening film for PIFF), and the screenshot below in particular.

And yet for all my friends’ high praise, for all the accolades, I found this to be a bleak, deeply frustrating movie. Feeling that perhaps my own inexperience was to blame, I forced myself to watch it again, this time with my wife. But unfortunately I gained nothing from the benefit of hindsight – more things to critique in fact – and my wife even fell asleep well before the end. 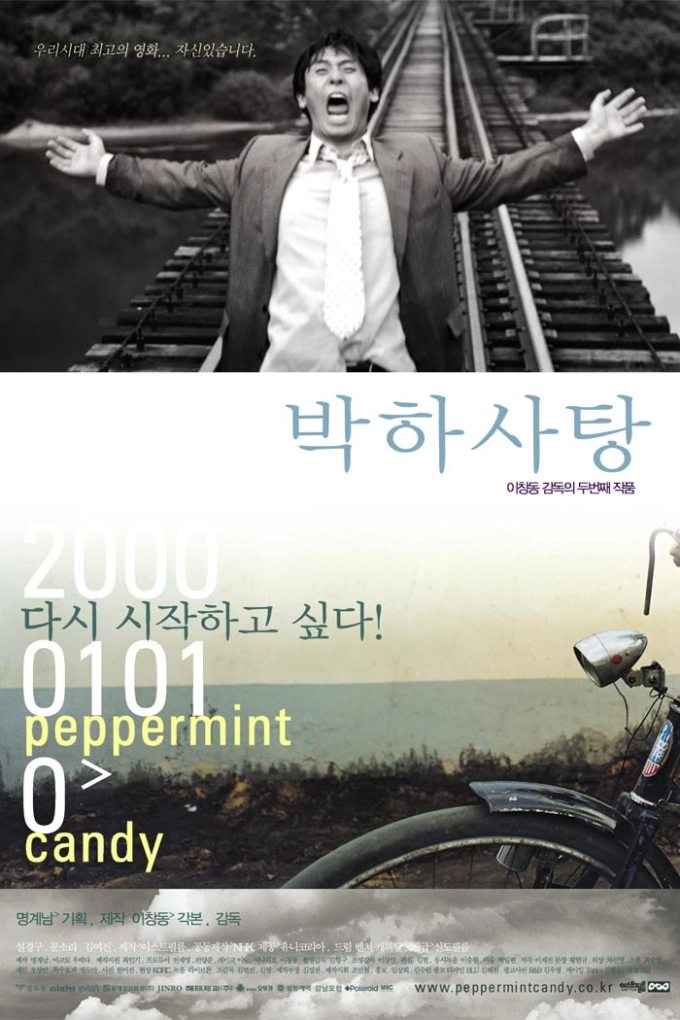 The film opens in spring 1999, with main character Yong-ho (Sol Kyung-gu {설경구}) joining a 20-year reunion of his old factory social group on the banks of a river. Quickly revealed to be bitter and angry, his behavior extremely erratic, within a few minutes he’s welcoming his death from an oncoming train on a nearby railway bridge, screaming the now classic line “I want to go back!” (또 다시 돌아갈래). Then it’s 3 days earlier (the first of 6 backward jumps in the story), and we see him buying a gun, then toying with killing himself. Soon it emerges that despite appearances, he’s virtually penniless, and that this is the result of his former business-partner stealing his money, a loan shark charging exorbitant rates of interest, and possibly his ex-wife also (played by Kim Yeo-jin {김여진}).

Then it’s 5 years earlier, and we see him as a successful business-person, and I anticipated seeing the events that led to his financial downfall. Instead, only the dissolution of his marriage is portrayed, for which both partners prove to be at blame. At which point that I began comparing the movie to Clerks.

Yes really, the 1994 budget US comedy. Please bear with me for a moment.

Easy to miss amongst all the jokes, towards the end of Clerks there is a scene where the main character Dante Hicks (played by Brian O’Halloran) complains about everything that has happened to him that day, as, indeed, he has been doing throughout the entire movie. What sets this scene aside though, is that in response, Randal Graves (played by Jeff Anderson) points out that everything he’s complaining about is in fact entirely his own fault. And with those 10-15 seconds and 2 or 3 lines, for me the movie was transformed from merely a good but ulitmately forgettable comedy – I find it difficult to laugh at it today – to something with a clear moral, and one that I have taken to heart ever since.

Granted, at the age of 18, one is probably more inclined to deliberately seek out such morals from movies than at the age of 33, imaginary or otherwise. And as the events that transformed Young-ho from a very innocent and dreamy young man to the bitter and twisted individual that commits suicide 20 years later are revealed, undoubtedly there is much in this vein to be gained from Peppermint Candy also, particularly with such suburb acting from Sol Kyung-gu, Kim Yeo-jin, and Moon So-ri (문소리), playing his first girlfriend. 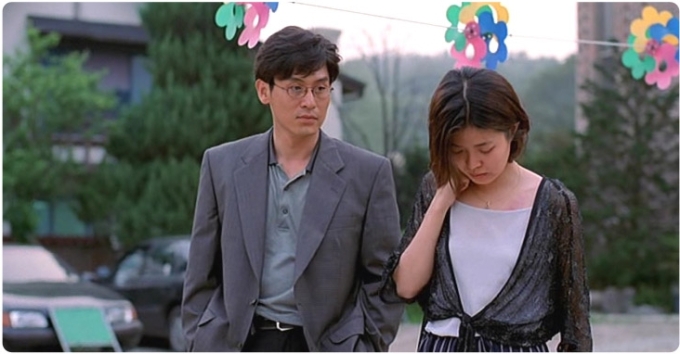 Most of the important ones however, such as how he came to lose all his money, why he joined the (then notoriously brutal) police, why he married his wife, and why he treated his first girlfriend so appallingly, are simply never answered. And therein lies the rub: these gaps are simply inexplicable in a movie about so focused on the linear, chronological development of a single character (albeit in reverse), emphasized cinematographically throughout by footage of trains between each segment in the story, and also – noticeable after a second viewing – the sounds of trains passing in many important scenes. Just like Darcy Paquet of Koreanfilm.org then, I too found that

…ultimately the main character remains out of our grasp. Lee denies us any easy explanations for our hero’s character, or excuses for his behavior. The film frustrated me as I was watching it for the first time; I wanted greater access to the hero’s feelings.

Unlike him however, I wasn’t “shattered” upon reaching the end of the movie: more exasperated. And I thoroughly regret watching it twice.

Perhaps as if to subconsciously compensate for these gaps in a movie that they otherwise clearly thoroughly enjoyed though, I have noticed many other reviewers of this movie (particularly Anthony Leong and Thomas Spurlin) finding Young-ho’s character to be both a product of and metaphor for the turbulent 20 years of South Korean history that the movie covers. But this is simply bogus: having a knowledge of that history doesn’t add anything to the movie, nor does the movie in any way educate you if you lack it. Moreover, Young-ho’s financial troubles for instance (vague as they are), are by no means related to the 1997 Asian Financial Crisis, and what happens to him during his military service in Kwangju May 1980 could have happened at any other time before Korea democratized. Indeed, given that the movie’s narrative would have worked equally as well in 1969-1989 or even 1959-1979, I’d argue that in fact its setting is almost irrelevant.

While I ultimately don’t recommend seeing this movie then, readers that already have may well disagree with my take on it, and I’m more than happy to be persuaded of its virtues. And I do, again, acknowledge the superb acting, and should also point out that the movie is also interesting for its depiction of Korea in the 1980s, for which I highly recommend the book Yogong: Factory Girl by Robert F. Spencer (1988) to get a sense of just how different daily life was in Korea then.

But however naive and unsophisticated it sounds, I still apply the same standards to movie today as I did when I was 18. And lacking any readily discernible moral then, nor educating viewers about an issue or giving me a fresh new perspective on a previously well-known one, I failed to see the point of this one I’m afraid.